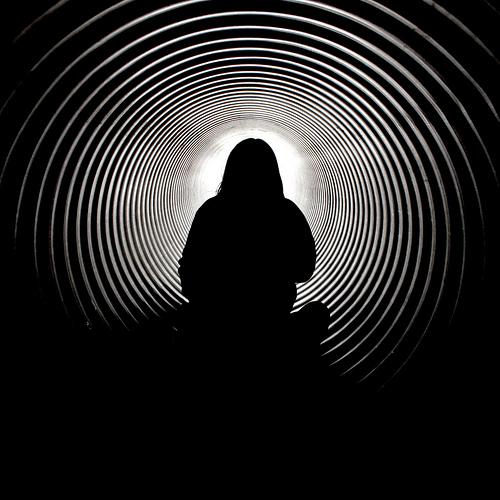 The wired man walks towards me, boots clomping, knife revving, but he’s between me and the front door. The only option I see is to go through the kitchen doors, past the red tape, into and hope to high hell that I can get out that way.

I go through the double doors, and see bodies lying on cold metal carts. They’re in a big, long room, and there are a lot of them, lying there with their eyes gone and an electric cable for each eye socket stretching from their skulls to where the cables continue into the ceiling. So many people in a room slanting downward, underground, all sorts of people, all sorts of ages. I notice as I run through the middle of the great rows of these bodies the movement of an arm. These moving limbs are still filled with the color of life, not with the paleness of death, and the fingers on the moving limb twitch, as if feeling he shape of some object beyond my reckoning.

Slanting downward, the room narrows until it’s a small metal tunnel pieced together out of giant pieces of corrugated steel. The giant steel pieces that compose this tunnel are held together by big ugly nuts and bolts which protrude like villi in a robotic intestine. The rows of bodies ended before I came to this tunnel, but so often there’s a door with a small square peephole. Too panicked in running from the wired man, I don’t stop to look, but in my sideways glances I see each room holds only one person. A few more wires stick out of the eye sockets of the people in these rooms than those I’d previously seen, as if whatever travels through these wires from these individuals to whatever destination is a higher grade stuff. Very different from those in the diner backroom, these people’s arms and fingers move in spasms and jerks, as if constantly pricked by thousands of needles.

The whole time I run, I hear the heavy foot falls of the wired man and the rumble of his knife echoing down the tunnel. By some miracle I’m able to run far enough away that the echoes are distant enough for me to stop, so I can rest. My lungs feel like they’re on fire, and the combination of adrenaline and physical strain makes me throw up.

I look up after emptying my stomach, looking to see if I’m anywhere near the tunnel exit. All I see is more tubular metal. The only exception is an open door to a room that is absent a body. I know it will just be temporary shelter and that the thin metal door won’t offer me any protection, but I don’t want to sit out in the open in the hallway. It feels too bare.

The small room is empty except for a human-sized table with a small radio on it. I know it’s going to come alive with the voice of my demon master, and when it does, I beg him to let me get out of this strange place. But Amduscias denies my request. He says there’s much potential inspiration for his infernal music there, so much suffering to bring him the fuel that he needs to return himself to flesh once again. Gone is the harmony in his many instrument voice, replaced with a grating bass and what sound like war drums.

“So many lost souls giving away so much,” Amduscias growls through the radio. “So many people opening their hulls to divulge secrets, and I want it, want it all, all to be mine so I can compose such melodies to their suffering.”

I try to plead again, but Amduscias cuts me off. “Go get whatever the source of this power is, and bring it to me. It’s Buer’s, I know it, it has his sterile stink on it, but so many individuals involved…. Don’t fail me in getting it, or I’ll kill you slowly.”

Then the radio shuts down. Fighting against panic, I go back into the tunnel. I don’t know what it is I’m looking for, but I must carry on.