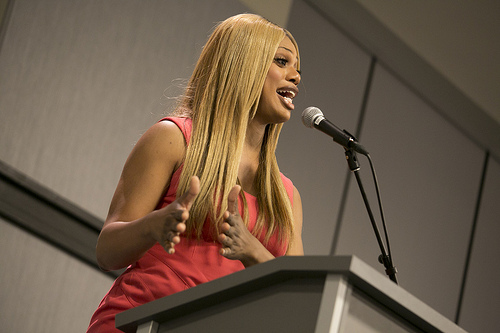 If I’m being honest, I usually couldn’t care less about compilation lists in print. I’m not up to date on People’s Most Beautiful, and I don’t read the top 50 tips in Cosmo about how to please my man. However, the speculation surrounding TIME Magazine’s 100 Most Influential People in the World sparked my interest.

I was on Twitter when I saw Laverne Cox encouraging her followers to cast a vote for her in TIME’s reader poll. For those who don’t know, Laverne Cox is an African American transgender actress who stars in the Netflix original series “Orange is the New Black.” Since her breakout role playing transgender prison inmate Sophia Burset, Cox has spent plenty of time in the limelight, largely participating in transgender and human rights activism.

Just in the past four months, Laverne Cox has delivered a keynote address at the 2014 Creating Change conference and was given the Stephen F. Kolzak award at the 2014 GLAAD media awards for her work in the transgender community. Cox has also appeared on Katie Couric’s talk show,  where she famously called out Couric’s insensitive genital related questions and used the platform as an opportunity to inform the public about the trans community.

Laverne Cox climbed to the number one spot in the reader polls, before finally ending up in fifth place when the results were announced. I giddily raced to the TIME website only to see that Laverne Cox was nowhere to be found on TIME’s 100 Most Influential People in the World.

I will reiterate: I generally don’t really care about this type of article. However, I hold TIME, a publication I have admired as a journalist that eloquently tells the stories of people around the world, to a higher standard than most. The exclusion of Laverne Cox sends a dark message that is counterproductive.

91% of readers who voted for Laverne Cox said that she should be on the list, while Carrie Underwood earned a place, after placing 75th in the reader poll and receiving a very low 25% approval. Hollywood actors and personalities, like Amy Adams and Seth Meyers, received spots on the list.  I can’t pick out anything incredibly significant that they’ve done this year, besides being famous and appearing on a screen of some kind, which is kind of their job.

Even Miley Cyrus got a spot on this list, apparently for appropriating black culture and licking everything, but that’s a conversation for another time. I don’t know when solely possessing celebrity status became synonymous with being influential.

I understand that everyone on this list is likely influential in his or her own right. My problem is that TIME made a conscious choice not to include someone with an incredible amount of support who belongs to a group that lacks representation in the world. Living as a transgender person is still very dangerous, and without spreading awareness, acceptance for this community is never going to come on a mass scale.

A recent study from the Organization of American States revealed that transgender people are murdered throughout North and South America at a rate almost 50% higher than gays and lesbians. A report called “Injustice at Every Turn” from the National Center for Transgender Equality and the National Gay and Lesbian Task Force found that 41% of trans people in the United State have attempted suicide.

In addition, a report called “A Broken Bargain for Transgendered Workers” reveals that transgender workers report an unemployment rate that is twice that of the population as a whole (14 percent versus 7 percent). It is also noted that there is no federal law protecting transgender people from discrimination based on gender identity, and only 17 states and the District of Columbia have this protection.

So, it is disconcerting to know that TIME would exclude a transgender woman of color who has inspired so many in the LGBT community and truly deserves a spot on this list of influential people. Fortunately, at the end of the day, TIME’s 100 Most Influential People is just another list. I know that Laverne Cox is going to keep leading the way in the fight for human rights and equality for trans people. I just hope that in the future, large publications like this will think more carefully about the messages and implications they are sending to the masses before they go to print.

This is a blog. The opinions and views are the blogger’s own and are independent from The Rocky Mountain Student Media Corporation.