Graphic Novels Everyone Should Read 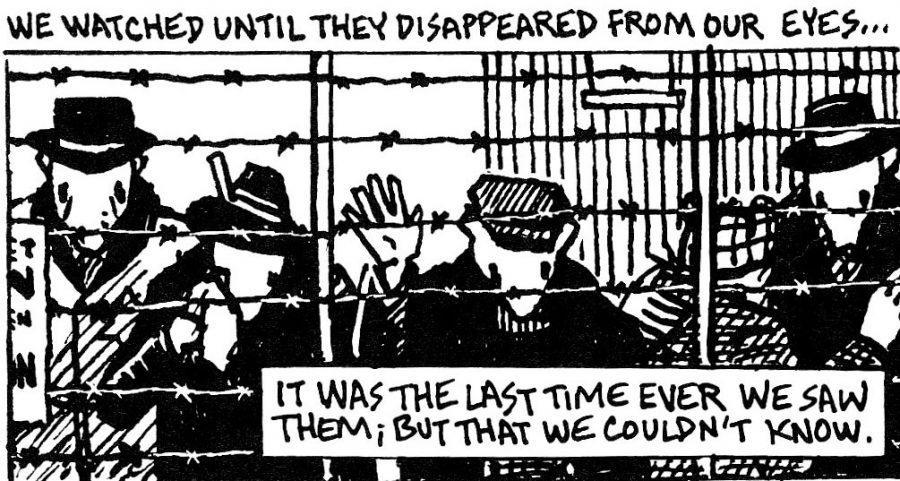 Graphic novels can be about anything. From political allegory and social justice to superhero evolution and quirky battling bands, graphic novels are for everyone. Although there are shelves upon shelves of great graphic novels, here are just a few to start your collection.

It was a tough decision to narrow this list to only one Alan Moore creation, but Watchmen is the absolute essential graphic novel to anyone’s collection.  The story takes place after a golden age of superheroes in the United States. They were once loved and worshipped, but as the US started to butt heads with Russia during the Cold War, they were deemed useless and were pushed into retirement. Most heroes adjusted. They got jobs, formed companies, continued with their lives while others continued vigilantism in relative secret. Then one of them was murdered. Watchmen is so much more than just a superhero story. It tackles issues like moral ambiguity and the hero complex with political commentary up the whazoo. There simply isn’t a concise way to describe the brilliance and depth of Watchmen without picking it up.

Critically acclaimed since its release in 2006, American Born Chinese managed to address struggling to fit in and racial stereotypes with humor and heart. It is actually three stories in one. The first is about a beloved monkey king that wants to become a god. Next is a story about a boy who moves to a new neighborhood to discover that he is the only Chinese American in his class. All he wants to do is fit in and maybe impress a particularly cute white girl. The last tale is about a popular teenager who is painfully embarrassed by his cousin who embodies the ultimate Chinese stereotype. Even though they all seem to be standalone narratives, they all come together to help each other in an interesting ending.

No great graphic novel list would be complete with Maus. It was paramount in bringing graphic novels to a wider, more mature audience. In fact, it was the first graphic novel to win the prestigious Pulitzer Prize. The book is based off of interviews with Spiegelman’s father Vladek, a Polish Jew and Holocaust survivor. It starts out depicting the interview in the 70’s when the project began. But then the reader is taken back in time as Vladek recounts life leading up to World War II and life during the Holocaust. Spiegelman uses animal analogs to represent different demographics, like Polish Jews as mice and Germans as cats. It is a painful tale of how Vladek endures through his past and how Spiegelman copes with his father.

Before it was nominated for the 2007 Oscar for Best Animated Feature Film, Persepolis was an enormously successful graphic memoir. It follows author Marjane Satrapi as she grew up in Tehran, Iran during the Islamic Revolution. It simply depicts Satrapi’s childhood that just happened to in a country at war with Iraq. She shows what her family was like while documenting her accounts of the Shah being overthrown, the new veil policies, and losing classmates. How she wanted to play monopoly and read anti-authoritarian comic books instead of learning about Iranian history. Similar to Maus, Persepolis illustrates history remarkably in an unexpected medium.

It was extremely hard to narrow this list down, so in no particular order are other incredible stories: Scott Pilgrim Vs. the World, V for Vendetta, League of Extraordinary Gentlemen, Kingdom Come