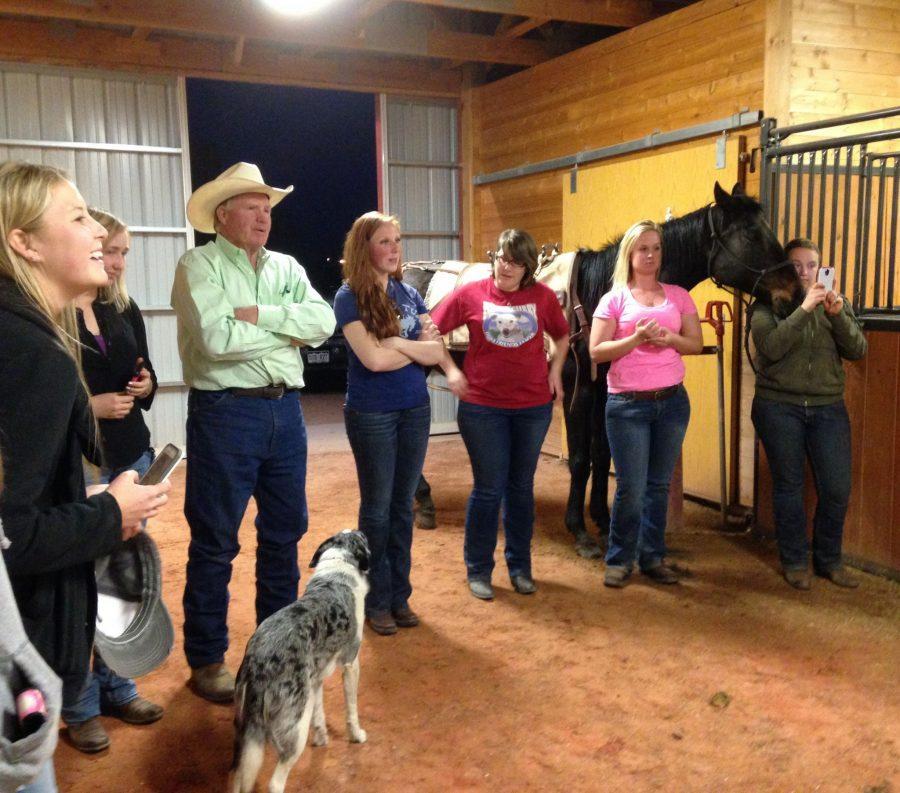 The tall cowboy rolled out a yarn taller than he was, as he stood in the middle of 13 members of the Mountain Riders Horse Club.

“My stories are mostly true,” said Chuck Peterson, club advisor, and instructor for the Trail Riding and Packing and Outfitting classes, with a sparkle in his eye.

Many of the members in the club are alumni of his classes, his current and former-teaching assistants, students enrolled in his classes, or students who just want to learn about the art of packing horses and mules into the backcountry. The club was started almost ten years ago by former students of the Packing and Outfitting class to continue to practice the skills they had learned.

Chuck, as he likes to be called, grins from ear to ear when he tells stories from previous classes, packing trips he’s led for hunters, jobs he’s had, or even growing up riding his horses everywhere. He was packing into the backcountry when most kids were riding their bikes or driving cars to get places. Usually he throws in a life lesson or two and a sprinkling of how to get a job in the horse industry.

A lot of his students have gotten summer jobs at outfitters around Colorado and Wyoming from taking his class and upon his recommendation. One student will be working on a project for the U.S. Forest Service this summer using pack horses, and several others will be running the horses at a nearby Girl Scout camp.

Last night for our bi-weekly meeting, Vice President Makenzie Keefer arranged to have Chuck give a packing demonstration for the club at the Equine Center. Her horse, Lady who she raised and trained herself, was packed for the first time with a sawbuck saddle that has wooden arms that rise above the horse’s back from either side and cross in the middle.

Orange plastic panniers, that we pronounce “pan-yards,” with leather loops are hung from the sawbucks on either side of the horse. In a true packing situation they would be filled with gear and food and carefully weighed so they were within a pound of each other. Sacks filled with shavings to mimic soft items like sleeping bags and tents were set on top of the panniers, covered with a tarp called a manty and tied down with the bosco hitch.

Next, Kris tied a soft load into a package, which is called mantying. It involves placing pre-weighed soft items on a tarp, folding the tarp over the items in a specific pattern, and tying up the bundle into a compact package. This particular package weighed 60 pounds and matched another mantyied package he tied up earlier. It is really important for the load to be balanced on each side of the horse. Some pack trips can go as far as 40 miles in a day and a balanced load tied on well can last all day and never need to be retied.

The second horse, Forty, was fit with a Decker saddle which has metal bars shaped liked elongated half circles with metal points coming off on either side. Sarah Wynkoop, former club President, and Adam held up one package along side Forty while Kris tied it onto the Decker’s bars. Adam and Kris tied the load on the other side.

Chuck told us that anything you can think of can be packed and then told us a story of how a line of 120 mules were once used to carry coils of metal cable up a mountain in order to build a mining gondola to bring extracted silver ore from the top to the bottom. Those mules and men worked for a year to complete the project. Besides carrying the cable, the mules carried panniers filled with ore down the mountain, and food and supplies back up to the top.

At one point in CSU’s history, men in the Military Science department were required to learn the art of packing. I wish I had pictures of that. After WWII dude ranch businesses sprang up as people from back east with disposable income wanted western recreational activities. This also led to hunting outfitters who were able to pack hunters deep into the backcountry for unique experiences. Once a year you can find a list of outfitting services across the west in magazines like “American Cowboy Magazine” based out of Denver.

You can learn a lot of history from Chuck’s stories, from his adventures, and life in the saddle, living by a code of ethics, and sharing his talents and mentoring his students. He’s forthright and honest with you telling you how life really is, what employers want from you, and how to make a living in whatever part of the horse industry you want to be in. He’s shared amazing adventures that he’s experienced in his life. But you know his stories really are mostly true and he’s the real deal when you see him pack a horse from start to finish in less than a minute.