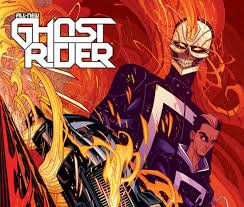 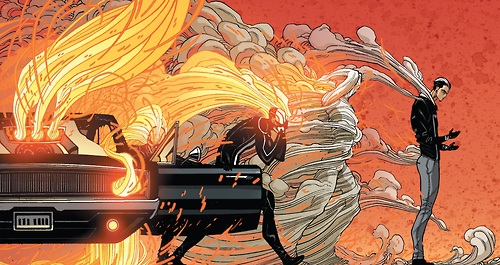 I never would have thought that A) Ghost Rider would get a massive revamp, and B) I would be reading it. Nothing against the original Ghost Rider series, I just never felt the urge to pursue the Johnny Blaze story. With only two issues out, I have already added it to my collection of subscriptions and am eager for next month’s issue.

The original tale of Ghost Rider is something like this: Johnny Blaze’s longtime mentor/adopted father Crash Simpson comes down with cancer. Unable to cope with losing both his father and Crash, he made a pact with the demon Mephisto. In exchange for Johnny’s soul, Crash would be cured of disease. Everything was swell until Crash decided to perform a huge motorcycle stunt and dies. Mephisto promptly comes to collect Johnny’s debt. Now Johnny would transform into a flaming skull with superhuman strength, healing, and other supernatural powers at night or when evil is afoot. All while riding a kick ass motorcycle.

What made me intrigued about this recent incarnation of the Ghost Rider was the new victim of the “Spirit of Vengeance”. Instead of a stunt motorcycle rider, it’s high school senior Robbie Reyes. Growing up in East Los Angeles, he’s a tough kid that keeps to himself. His only weakness is his little brother, Gabe, who’s naïve of his violence ridden neighborhood. He goes to school, works as a mechanic, then makes sure that Gabe gets fed at night. Everything changes when he decides to take one of his client’s cars out for the night to win a $50 grand street race.

I was instantly hooked when I read the first few pages. A couple of thugs took away Gabe’s wheelchair when Robbie was coming to pick him up. He immediately started a fight but backed down when guns got involved. Gabe was amazed by how brave Robbie was, but you can see that even though Robbie is strong for his brother, he’s still a kid himself. To survive in his neighborhood, he needs to be tough. And he’s going to need to be a hell of a lot tougher when he meets Dr. Hyde, a suspicious character they introduced.

All-New Ghost Rider is written by Felipe Smith and illustrated by Tradd Moore. There are currently 2 issues out.