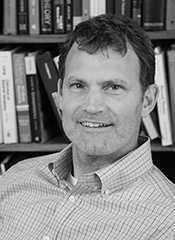 I walked up to the third floor of the College of Business at Colorado State University to reach Dr. John Elder’s office. It’s a little bit warmer up there as the heat rises from the rest of the building. I met John in the hallway as he was going back to his office, and he welcomed me in.

John did his Masters and PhD at the University of Virginia. He has continued to work with faculty from Virginia to write method oriented papers focused on econometrics and statistical techniques. He remains in contact with many of his peers at Virginia for future projects as well. “I have become pretty involved in, kind of by accident, in an area of research that was very fruitful,” He told me in reference to his research on the relationship between energy prices and economic activity.

“High energy prices tend to be bad for economic growth, and lower energy prices tend to be better for economic activity, but there hasn’t been a really good understanding of the magnitude of these relationships.” Researchers have found that high oil prices definitely lower economic activity. The opposite is not necessarily true. When oil prices fall economic activity does not pick up by the same magnitude that it fell from. It’s kind of like dropping a bouncing ball which isn’t perfectly elastic. When a bouncy ball is held up and then released, the ball will not bounce back to the same height it was dropped from. This lack of equal effect on economic activity is an especially important concept when looking at investing in commodities.

When firms are unsure of what oil prices will be in the future they will not spend as lavishly until the uncertainty is resolved. John found uncertainty about oil prices to be a major cause preventing lower oil prices from creating more economic activity. He wrote several papers with his colleagues on this subject. He continues to look into this research more deeply by studying how industries are affected by these energy prices. “Trying to study relationships at the macroeconomic level is extremely difficult,” John told me. New econometric tools are developed every year to help researchers like John study how our world works financially. This has allowed him to continue researching and expanding upon his previous projects.

He said to me, “It’s not like you kind of work on that topic and then boom, it’s done, there’s nothing more to do. There’s a lot more to tease out of that relationship.” John’s research has the potential to affect policy created by the United States government. Some ideas he has proposed for protecting ourselves from the effects of oil on economic activity include looking into alternative sources of energy and insulating energy prices from external forces. Now the challenge is to use disaggregated data from his research to look at industry sectors. How are services affected versus manufacturing sectors of the economy when oil affects economic activity? This is still a macroeconomics study, but it’s performed at a more granular level.

The US isn’t the only country looking into these economic relationships. “There’s an energy institute in Milan, and they invited me out to meet with some of their energy folks,” John told me the team built upon the research he’s performed for years in order to find more . Dr. Elder was able to grow his previous research by working with international teams he met in Milan.

The journey that is research thus never truly ends. There is always something over the horizon waiting to be found.