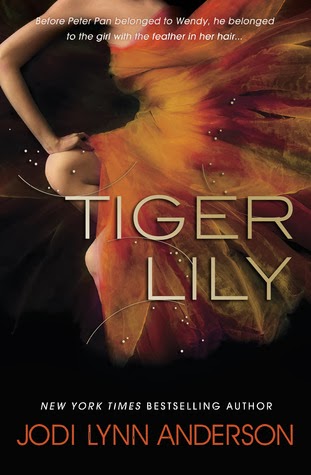 If you enjoyed the story of Peter Pan and his adventures in Neverland, then you will definitely by a fan of Tiger Lily by Jodi Lynn Anderson. A synopsis of the story:

Before Peter Pan belonged to Wendy, he belonged to the girl with the crow feather in her hair. . . .

Fifteen-year-old Tiger Lily doesn’t believe in love stories or happy endings. Then she meets the alluring teenage Peter Pan in the forbidden woods of Neverland and immediately falls under his spell.

Peter is unlike anyone she’s ever known. Impetuous and brave, he both scares and enthralls her. As the leader of the Lost Boys, the most fearsome of Neverland’s inhabitants, Peter is an unthinkable match for Tiger Lily. Soon, she is risking everything—her family, her future—to be with him. When she is faced with marriage to a terrible man in her own tribe, she must choose between the life she’s always known and running away to an uncertain future with Peter.

With enemies threatening to tear them apart, the lovers seem doomed. But it’s the arrival of Wendy Darling, an English girl who’s everything Tiger Lily is not, that leads Tiger Lily to discover that the most dangerous enemies can live inside even the most loyal and loving heart.

From the New York Times bestselling author of Peaches comes a magical and bewitching story of the romance between a fearless heroine and the boy who wouldn’t grow up.

As a loyal fan of the Peter Pan story, I was super excited to discover a book that explored Tiger Lily’s life. If you recall from the Disney movie, Tiger Lily is a young girl living in a tribe of indigenous people. Peter is enthralled by her, and if you think back carefully, you may remember that the two of them even share a kiss!

After cracking this book, I absolutely could not put it down. It has feelings of mystery and romance and terrible sadness that all coincide with one another. Anderson writes Peter and Tiger Lily as if they are any other pair of teenagers struggling to make sense of their world. They both leap off the pages, no longer fictional characters, but characters you could conceive of meeting and sharing a conversation with (if we had pixie dust and could fly to Neverland to see them, of course). Tiger Lily has a spit fire personality and isn’t afraid to speak her mind, which I love in a female protagonist.

And then there is the romance, which was my favorite aspect of the book. Tiger Lily and Peter share a young, passionate, forbidden love. They love and they fight and they try to make sense of the feelings they have for one another, which is not so unlike relationships that many of us have had!

I loved everything about this book (except the ending, but I won’t give it away). It is beautifully written and realistically delivered. Unfortunately, I don’t believe it received the type of attention that it truly deserves! Not one person I’ve asked has read this book, or even heard of it! Let’s change that.

If you love Peter Pan, adventures in Neverland, and a dose of teenage romance, Tiger Lily is the next book you need to get your hands on.