Forest fires and the unheard benefits 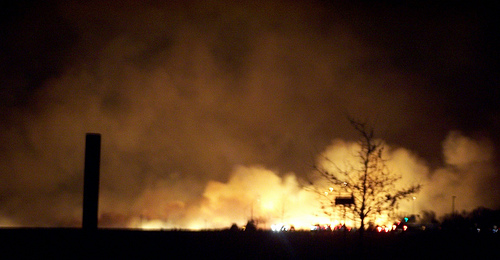 During the summer of 2013, parts of Colorado, including Fort Collins, were shrouded in smoke as fires blanketed foothills.

Forest fires have been the antagonist of many stories. Often painted with words spoken out of fear, they have received a reputation similar to that of a horrific killer instead of being accredited with the opportunities they create for the environment.

The heat from forest fires promotes tree growth by encouraging conifer trees to open their cones and release their seeds onto the now suitable seedbed created by the forest fire. The fire also burns away diseased or infected trees, thus creating a healthy environment for the seeds to grow.

Wildlife is able to take advantage of the conifer’s dropped seeds as a nutritious food source. Animals aid in the dispersal of new trees by collecting and dropping conifer seeds in open spaces created by forest fires, consequently contributing to forest biodiversity.

While forest fires may be the cause of much damage, they have the potential to serve as a natural component of healthy forests. Wildfire managers will even prescribe controlled burns to forests that haven’t reaped the benefit of fire in a long time.

Colorado State Forest Service offers volunteer programs to those interested in mitigating forest fires, improving forest health, and educating others about forest fires. More information is available at their website.

Rather than view destruction and unpredictability as an unfortunate circumstance, I encourage you to appreciate the beauty in the fragility of life instead. After all, when something ends, something new always begins.