A Tail of Woe Doggy 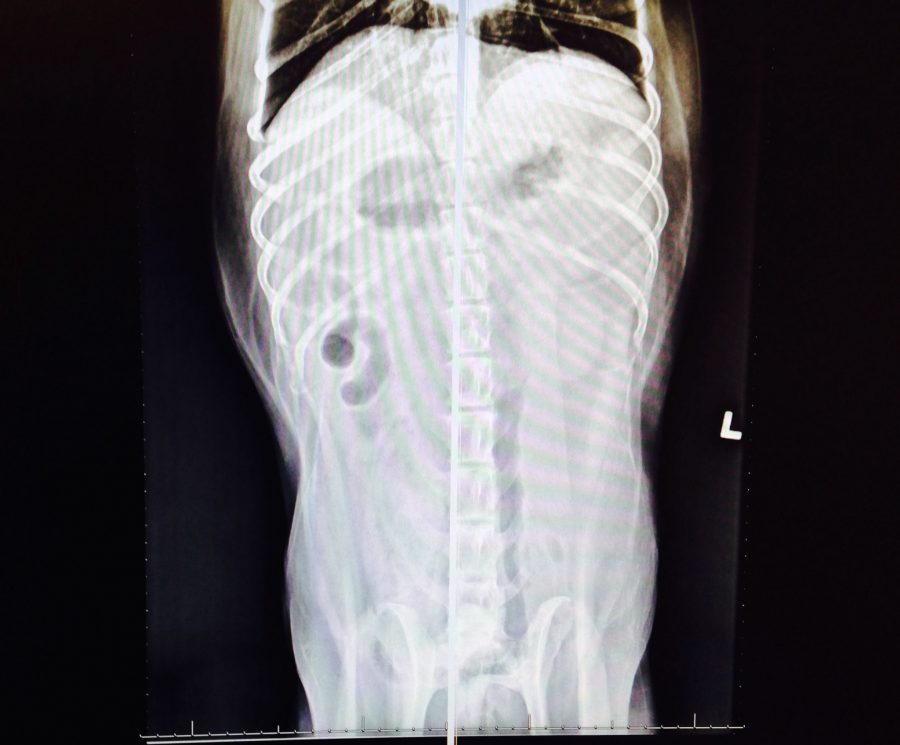 CSU has one of the top veterinary schools in the nation. A lot of my classmates have come here for undergraduate school not just because of the awesome animal and equine science programs, but also because they want to pursue a career in veterinary medicine, and they want to do it here at CSU.

I just never thought I’d be using their services for my pets.

My dog isn’t the kind of dog that sucks up weird objects on our walks “just in case” it’s really some amazing piece of meat that magically was put there and he might miss out. Partly I think that’s a lot of years of training starting with a super watchful mom who actually read puppy books before I got him. Plus, that’s not really his personality.

Well Thursday night that all changed when we were about to step into the dog park. He was rooting around in what was left of a snow bank and suddenly I realized he was eating something and I yelled, “drop it!” Well as those of you with dogs know that really means “eat it quick!” in dog speak.

The rest of the evening was just our normal routine. We ate dinner when we get back, and then I studied into the wee hours of the night with doggy potty walks to break up the fun.

When my alarm went off way too early, I dragged myself out of bed and I saw a scene of grossness in my living room covering my six by eight foot area rug. I never even heard him vomit, but obviously he had and it was the most I’d ever seen. I got it cleaned up, got him walked, but no snack after that fiasco, and headed off to school. Poor guy, that’s not a fun way to start your 12th birthday.

Now, I have to tell you my dog is a mix between a wire-haired fox terrier and an English springer spaniel. He’s smart. This kid will not eat or drink even with full bowls set out until I come home because he doesn’t want to mess in the house. He’s dependable. Accidents are very rare, but when I came home Friday evening it looked like my dog had exploded all over the apartment. I got him outside and he still had to go. This is not my dog. I rolled up the area rug realizing there was just no way to save it and chucked it in the dumpster. I finished cleaning up, but in the back of my mind I kept thinking, “this is not my dog.”

My friends texted me to go out and I thought about it, but I decided to call my vet instead. They were about to close for the night and recommended CSU’s Veterinary Teaching Hospital. I called and was passed immediately from reception to urgent care where I spoke with Shana. She listened to my list of his symptoms and we decided he really did need to come in.

I found a piece of what looked like a digested corncob in his vomit that morning and I remembered seeing some corn kernels on the ground next to the dog park. Is that what he ate?

Once I got there Jordan checked me in, and Shana, who is a veterinary student at CSU, came out and took us into an exam room. After interviewing me about his history and behavior and everything I could remember from the night before and that day, she went in the back and presented her notes to Dr. Gettinger. They both came in the room, had a treatment plan ready, and we discussed all the options.

Let me tell you, when your kid is sick, the kid you’ve been raising since he was a puppy, the kid who’s gone everywhere with you, who’s has been a part of your highest highs and your lowest lows for over 11 years, who’s is in your family pictures and shared special holiday moments…well, you’re going to do anything for him.

When the x-rays came back there was definitely something in his stomach, quite possibly part of a corncob. He hadn’t eaten in 24 hours by this point; his stomach should’ve been empty. My dehydrated kid was in the back getting an IV line so he could get fluid on board. They had already placed the call for a surgery consult and I signed the papers for them to do surgery in the middle of the night if it came down to that. They started blood work and did a chest x-ray to rule out cancer, and check the status of his twelve-year-old doggy organs. The tests showed he was cancer-free, and his liver and kidneys were in great shape. They brought him out to me for one last snuggle, and then I had to leave him there.

I cried. It was a really hard moment for me, but everyone there treated me with respect. They obviously had great empathy and compassion for both my dog and me, and showed him a lot of affection. That was what made me able to go home and try to sleep.

In the morning Dr. Gettinger called with an update that he’d done well through the night and hadn’t needed surgery. She also let me know they’d take a new set of x-rays in a little while to see if the object was still there.

A little later after the shift change Dr. Venn, who had picked up his case, called to say his new x-rays showed the object had passed out of his stomach. They were continuing with IV fluids. At this point they were hopeful he would just digest it and not get a blockage. They also did a test of his pancreatic enzymes to rule out pancreatitis, since he’d had it once as a puppy. Fortunately there were no elevated levels. She also encouraged me to come in and visit him.

That blew my mind. Shana and Dr. Gettinger had said the same thing the night before. I have never had a veterinarian tell me I could come and visit my sick dog. We’ve had quite a few veterinarians over twelve years and multiple state moves. I’ve even worked for veterinarians. This, however, was exceptional, compassionate, and awesome.

I finished up the more extensive cleaning of my apartment and then drove over. Another veterinary student, Maricarmen, brought him out to me in the lobby. Boy did I snuggle and hug him, and he was happy to see me, too. I even got to take him on a walk outside. Poor kid was still feeling junky, but it lifted both of our spirits to be together. Then she took him back into the care area. I just felt so relieved.

Later in the afternoon Dr. Venn and I spoke on the phone again, and though he hadn’t passed the object he was no longer in immediate danger of a blockage.  We decided he could come home later that night. So, when I came to get him Dr. Venn went over all the discharge instructions with me; the medications he’d need to take and their schedule, the bland diet I needed to feed him, the probiotic to help repopulate his gut with good flora, and signs to watch for that would warrant an immediate return. It was a pleasure to meet her in person and thank her for taking care of my kid.

The first year veterinary student who was working the reception desk, Hannah, had been an Ag Ambassador before graduating last year and had spoken at my Ag School Ram Camp Welcome before the fall term started. I thought it was really cool that all the students in the different classes were not only working at the Veterinary Teaching Hospital, but they were also very integrated into the entire practice.  This is absolutely one of the reason’s that CSU has such a renowned vet program.

So my best friend is getting better slowly. What could have been a much more traumatic situation was eased by the excellent care we both received. I can’t even thank everyone who worked with my dog enough for everything they did. I can easily recommend the VTH to anyone. And for my classmates who are aspiring to attend the vet school here at CSU, I have complete confidence that you’ve set your sights on the very best school in the country.