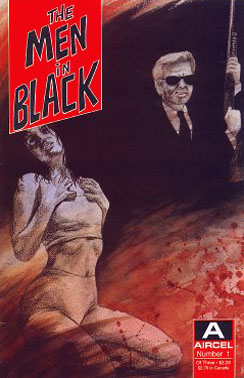 Everybody knows the major comic book movies like The Dark Knight and The Avengers, but there are an alarmingly large number of movies that are not recognized. WARNING: Slightly spoiler-ish summaries below.

Everyone’s seen the 1994 Jim Carrey movie, but the movie is VASTLY different from the comic book series. Where Carrey’s version is campy with a warm happy ending, the comic is demented and destructive. The mask does allow the wearer supernatural powers and the ability to do whatever he or she wants, but in return the wearer becomes extremely violent with vengeful tendencies. While movie Stanley was a sad schmuck who wanted to have fun and do heroic deeds, comic Stanley goes on a murder rampage of anyone that did him wrong. It will make you rethink the kid’s animated television series.

Not going to lie, this one had me by surprise. The Men in Black was originally published by Aircel Comics, which eventually was bought by Malibu Comics which was finally bought out by Marvel Comics. It had a total of 6 issues in the early 90’s and then a set of 4 in 1997 when the first movie came out. The premise is fairly similar except the MIB regulates all supernatural activity (zombies, wendingos, etc.), Agent J was blackmailed into joining, and Agent K was more callous. The movies do an interesting job expanding other characters backgrounds and relationships but it’s definitely worth reading the series original roots.

Written by legend Warren Ellis, it still is based on the retired assassin Paul Moses (Frank in the movies). Where the movie and the comic diverge is in detail and length. The original series is only three issues, had only a handful of characters, and the details of eliminating Paul were different. Basically the new director of the CIA is filled in about previous affairs of the agency and thought that Paul was a threat to his political position. So when he sends a team of assassins after him and let’s just say Frank’s not one to let things go.

Written by Wanted’s (yes, another comic turned movie) Mark Millar, Kick-Ass follows teenager Dave Lizewski as he tries to become a real life superhero. The movie followed the comic book series fairly well. Kick-Ass’s origins remained the same as well as his connections to Big Daddy and Hit-Girl, but there are a few differences that were not seen as movie friendly. Hit-Girl explains her and Big Daddy’s background, but Big Daddy didn’t confess that the story was actually a lie he told Mindy. Additionally, Dave is definitely NOT lucky in love with Katie. If you are interested in what happens after the movie ended, Millar and illustrator John Romita Jr. continue the story as Hit-Girl as an ongoing series published under Icon.

The 2010 movie with famous names Zoe Saldana, was based off the 32 issue series published under Vertigo. Although it is always a pleasure to see Idris Elba holding a gun and Chris Evans plays Jensen hilariously, the movie arc was off from the comics. While the end point was to get revenge on their old handler Max, the way they accomplish their goals is quite different. As a comic book series, it had a pretty good reception. Under its three year run, it was featured on the New York Times graphic novels list and won multiple Eisners (equivalent to a comic book Oscar). As a movie, it did not see as much success.

Honorable Mentions: Wanted, The Crow, Cowboys vs. Aliens, V for Vendetta, and The Walking Dead