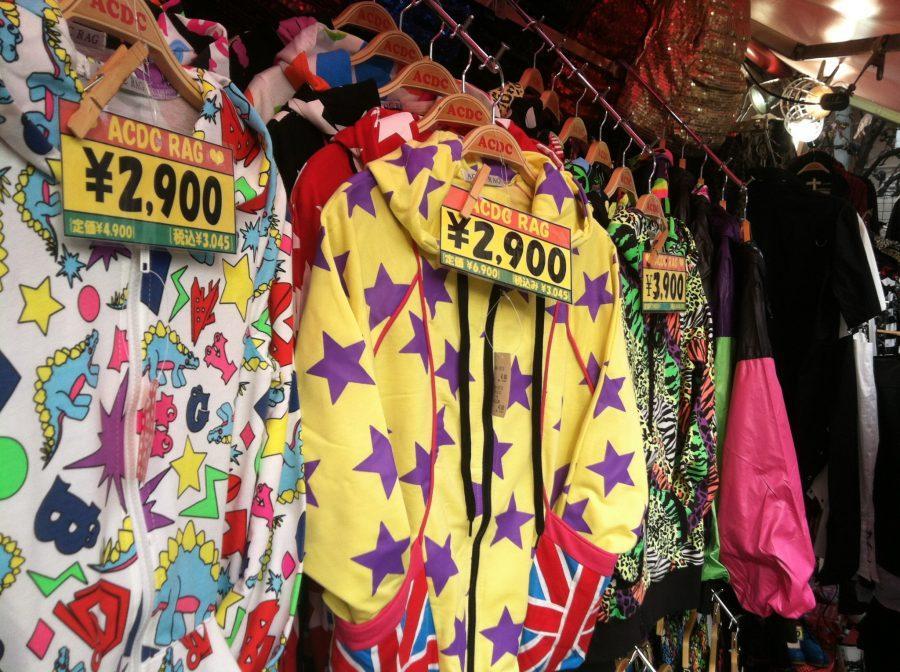 Konnichi wa from Japan, Fort Collins! This week, I’ve got a trio of topics to wax poetic about: one of my favorite destinations in Tokyo, Japanese fashion and Japanese punks.

One of the most striking things I’ve noticed about Japan is their interesting fashion, which is, on one hand, quite original and cool and, on the other hand, horrifically awful. The best thing about the country’s fashion is their T-shirts with random English phrases on them. Most of these either have a single word written on them in block letters (words that have no reason to be on a T-shirt, like, say, “STONE”) or have a terribly ungrammatical phrase that probably is meant to be inspirational (e.g. “Raise Me Up, Stay Peace”). They’re hilarious and great. It’s like the Japanese version of clueless Americans getting kanji tattoos without any knowledge of what they mean.

A trend I’m not terribly fond of is the odd 1980s/1990s revival trend. While this is occurring to an extent in the States, the Japanese are going H.A.M. with bad Nineties fashion. Some clothing stores considered fashionable over here are selling track jackets, mothball sweaters, and random U.S. college sweatshirts. They look (and smell) like Goodwills, except, instead of paying $5 for an awesomely awful track jacket straight out of The Fresh Prince of Bel-Air, they sell them for upwards of $80. It’s insane. But then again, to the Japanese, Colorado girls probably look silly in their Northgate jackets and Ugg boots. To each their own.

You can see some interesting fashion choices (ex.: it’s a trend here for girls to wear U.S. Army jackets!) on my campus in Hirakata, but everything is even more intense in Tokyo. One of my favorite locations in Tokyo was the tiny district of Shimokitazawa. Shimokita is known as a “hipster district,” with lots of fashion stores, concert venues and interesting restaurants. It was pretty awesome; the store clerks were super nice, I saw sweaters with stuffed Gremlins toys sewed to the front, and there was even a pretentious street art exhibit!

There were some awesome stores and shops all around Shimokita, and while walking from shop to shop, I had a realization: Japanese hipsters are the same as American ones! Walking around Shimokita is how I imagine walking around Seattle or Portland would be like, just in a different language. There were stores with prayer beads, random Hindu memorabilia, horrible turtleneck sweaters, etc., etc. It was like being in Boulder, except I didn’t have to be in Boulder (thank the lord!).

In the same vein, Japanese punks aren’t too different from their American counterparts either. This last weekend, I had the experience of going to a hardcore punk show in a grungy little venue in Osaka. I go to a lot of underground/garage punk shows back in Colorado, and I felt like I was back home! The audience members had about the same clothing choices and very similar attitudes (despite the angry music, there were a lot of positive vibes that night!).

The similarity between American and Japanese counterculture groups makes me wonder if these splinter groups are only the same because of the Internet age and the ubiquity of images of them on the Web, or if the lifestyle hipsters and punks live is just appealing to people worldwide. I found it an interesting thing to think about these last couple weeks. It makes me think that maybe we’re all more similar than we appear to be upon first glance.

P.S.: I hope this doesn’t come off like I’m making fun of Japanese people, because a lot of them dress normal and they’re all ridiculously nice people. I’m also far from fashionable, so I might have no idea what I’m talking about and track jackets might have never gone out of style.