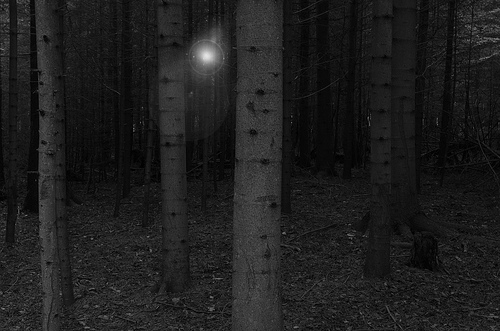 Halloween’s coming up this Thursday, which is unfortunate for us who don’t feel like being hungover during class on Friday. Fortunately, there are ways to feel the spirit of Halloween without being chased by the police in a Quail Man costume after six shots of McCormick’s. Yes, pure and utter terror is but a click away. Here are a few unconventional horror games that are all under $10.
Eversion
Released in 2008, Eversion is a platformer that starts out as a colorful celebration of life and subtly becomes the ingredients of all of your nightmares. Your character, Zee Tee, has the ability to “evert” the environment at certain points in order to get to different areas of a stage. The game only takes a couple of hours to beat, but it is one of the strangest platformers I have ever played. You can get it from the developer Zarathustra Productions for free or get the HD version from Steam for $4.99.
Slender
Slender: The Eight Pages is a game where you slowly walk around a forest collecting scraps of paper while being chased around by the Slender Man, a tall, faceless being that will kill you if he catches you or if you look at him for too long. This game is very minimalist in how it approaches horror. You can only run for a short amount of time and your flashlight can run out of batteries. The pages you have to collect spawn randomly every game and the Slender Man will get faster the more pages you collect. It can get very frantic, especially when you play in the dark. You can download the game for free at Parsec Productions’ website (warning: sound). They have also made a full game called Slender: The Arrival, which you can get on Steam for $7.99 while it’s on sale.
The Binding of Isaac
The Binding of Issac was created by Team Meat, the developer that made the excruciatingly hard game Super Meat Boy. This game is no different. You are Isaac, a young boy trapped in a basement by his insane and extremely religious mother. It plays like a mix of Contra and The Legend of Zelda. You defeat a wide variety of enemies and bosses in randomly generated levels while collecting power-ups. There are hundreds of power-ups in the game that are also randomly generated, making each playthrough a new and often frustrating experience. This game isn’t as scary as it is extremely disturbing. The artwork looks like it’s from a cute, miniature Silent Hill game and the enemies make disturbing noises, such as distorted crying. I would recommend playing this game at high volumes if you have neighbors or roommates. That way, they can celebrate Halloween by thinking they live next to a portal to Hell. The Binding of Isaac can be purchased from Steam for $4.99 and has an expansion that costs $2.99.

There are many other horror games available for those willing to shell out some money. Amnesia: The Dark Descent is fun if you enjoy being chased by weird jawless creatures. Resident Evil 4 is one of my favorite games of all time and is available for both PS3 and Xbox 360. Whatever game you decide to play this Halloween, remember to play with the lights off. It’s more fun that way.
Delete Image
Align Left
Align Center
Align Right
Align Left
Align Center
Delete Heading