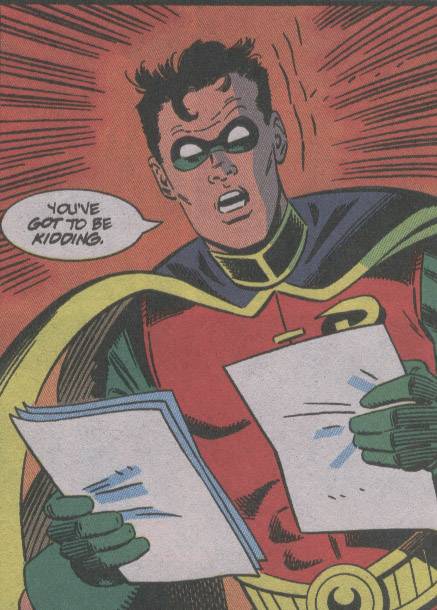 This is the part 3 of the 6 part series “A Brief Guide to Robin”. For links to previous Robins, click on their names: Dick Grayson, Jason Todd

If there is anything that the comic book industry likes, it’s coincidence. Tim Drake met Dick Grayson while attending the circus with his parents. That was the same fateful night when Grayson’s parents died in the tragic high wire accident. Being the clever boy he was, when watching a crime fighting footage of the Boy Wonder, Tim recognized Robin’s moves from the Flying Grayson’s circus act. Once he connected that Dick was under Bruce Wayne’s guardianship, he deduced that they were Robin and Batman.

DC comics alluded that Tim was in the background during the whole Batman series so far. He quietly watched as Dick become Nightwing and Jason became reckless. It wasn’t until after Jason Todd’s death did he step into the spotlight. Bruce was not handling Jason’s death well. Dick was working independently as Nightwing at the time, and Bruce was growing more and more violent. Tim pleaded with Grayson to go back to Batman as Robin, but he insisted that he would only help as Nightwing. Frustrated, he enlisted the help of everyone’s favorite valet, Alfred Pennyworth, to endorse him as a new Robin. Despite everyone’s approval, Bruce was still obstinate. He could not handle losing another partner. Tentatively, Bruce allowed Tim to stay as a trial Robin if he underwent intense physical and mental training.

Of course, when there is resolution, conflict is just around the corner. Amidst his training, Tim’s parents were kidnapped during their vacation in the Caribbean. Batman came to their rescue, but to find Tim’s mother dead and his father in a coma. Bruce feared that Tim would fall into Jason’s spiral of anger, but he proved himself by saving Batman and a Gotham City journalist from Scarecrow. So at 13 years old, Tim Drake officially became the new Robin.

Tim Drake made the Robin mantle his own, like Jason Todd and Dick Grayson before him. He was extremely intelligent, excelling in detective work with an even temper that matched Grayson’s. As he got older, Tim worked side by side with Batman as well as Young Justice and the Teen Titans. He even had a very serious relationship with Stephanie Brown, who has a stint as Robin. Currently, Tim is under the identity of Red Robin and as the head of the Outsiders, a covert branch of the Batman’s crime eradication group Batman, Inc.