Helton a Hall of Famer? I say yes 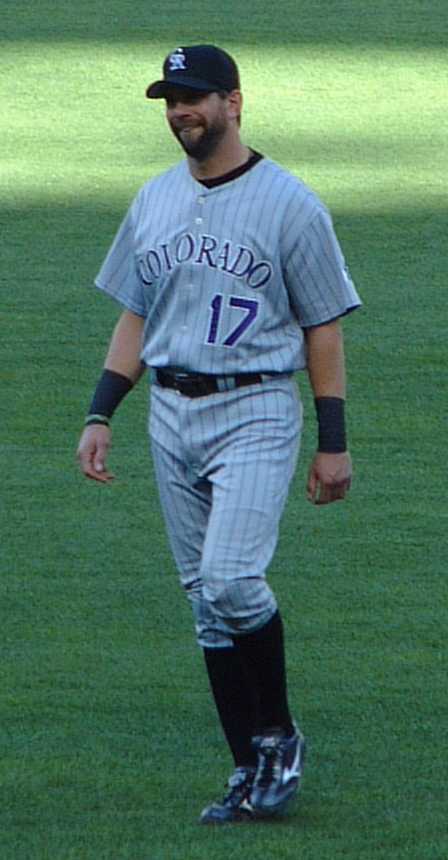 Todd Helton hasn’t said it officially because he doesn’t want to be a distraction for his team. He is handling what is likely to be his final major league season in the most modest of fashions.

Last year, future Hall-of-Famer Chipper Jones announced that 2012 would be his final season prior to Opening Day. Similar to Mariano Rivera this year, Jones was welcomed at each ballpark the Braves played at with some sort of unique sendoff item. While Rivera did not ask for the added fanfare, Jones relished in it, because that was his personality.

Helton has not been presented such fanfare because he hasn’t supposedly made up his mind yet. But even if he did what Rivera or Jones did and publicly announced his looming retirement prior to April, he wouldn’t want to be put on a platform.

The Toddfather has been one of the most humble, down-to-earth stars in the game of baseball since joining the Rockies in 1997. And the only other current Major League player to be with one team for as long as Helton has been with the Rox? Derek Jeter.

That will probably mean squat to the Baseball Writers of America when they decide whether or not to give Helton the nod to Cooperstown years down the road. But it sure has meant the world to the Rockies and their fans.

In their 20 years of history, I have been a Rockies nut. I have clear memories of Larry Walker’s stupidly impressive 1997 MVP season and Ubaldo Jimenez’s unreal first half of 2010. I can relive Matt Holliday’s slide in game 163 and Carlos Gonzalez’s upper deck home run that gave him a cycle against the Cubs.

But there are no images more iconic than Helton in 2007, the year he led the Rox to Rocktober. The first of which has to be Helton’s walk-off home run against Takashi Saito and the Dodgers that prompted the first baseman to pump his fist as he rounded first base, culminating with a leap into a dog pile of his teammates.

The second still gives me goose bumps. It’s the final game of the NLCS against the Diamondbacks and the Rockies are an out away from going to their first World Series. Eric Byrnes hits a swinging bunt that’s fielded by Manny Corpas, who fires over to Helton at first. Byrnes’ headfirst slide is to no avail and Helton raises his arms in pure, childlike ecstasy.

Over the course of his career, Helton and the Rockies appeared in the postseason twice. It takes a unique player to stay dedicated to a bad franchise for his entire career. Walker wanted a chance at a World Series and was traded to the Cardinals at the end of his career. Holliday wanted no part of the Rockies after a dismal 2008. And Jimenez complained he deserved a new contract, forcing a trade to the Indians.

Helton has stayed true to the purple pinstripes, through the few special moments and regular forgettable times. He deserves to be the first Rockie to have his number retired, whether or not he gets into Cooperstown.

Listening and reading to what national writers are saying, Helton will either barely miss getting into the Hall or get in after several years of eligibility.

The major rebuttal to Helton’s chances is that he has played half of his games at Coors Field, which is still regarded as one of the notorious offensive ballparks in baseball. That may be true, but it would be a travesty if voters wrote him off simply for that reason.

My response? What about all the pitchers that throw half of their games in pitcher-friendly ballparks? Take Clayton Kershaw, for example. He may be far and away the best pitcher in the league, but still has the luxury of calling Dodger Stadium and the surrounding heavy air his home office.

In terms of actual stats, Helton has put up some ridiculous numbers. The five-time All Star and three-time Gold Glove winner ranks in the top 100 in numerous all-time lists. Here’s just a few of the more recognized ones as of Monday night.

If this really is the final chapter of Helton’s career, Rockies’ fans should sell out the remaining home games in appreciation of number 17. His opposite field laser base hits and picks at first base made easy are just two of the sights we’ll miss at 20th and Blake moving forward.