Hawkeye: The Most Underappreciated Avenger 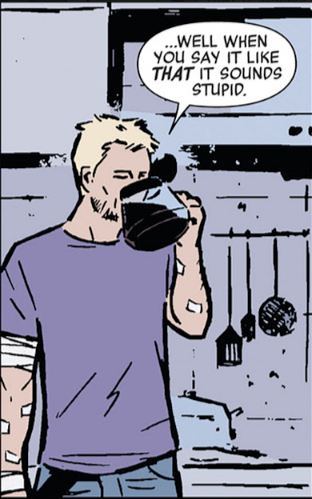 With comic book movies being produced up the whazoo, many people are going back to the comic book roots to know more about characters and consume plotlines in between films. And if there’s one hero you should start at, it should be Hawkeye. Hawkeye has landed his own series starting August 2012, not too long after The Avengers was released.

Clint Barton is a simple man. He lives in a modest apartment in the city with a hodgepodge of unorganized arrows. Of course he’s still an Avenger, but he’s really not involved in their daily exploits. Every once in a while his apprentice, Kate Bishop, stops by to make sure he’s still alive. Clint finds himself in a mess of trouble. He runs into former circus enemies, lovers, leagues of villains, and annoying tenants.

One of my favorite aspects is David Aja’s artwork. His bold lines are raw and kitschy, reminiscent of comic books from the 40’s. But Hawkeye wouldn’t be the same without Clint’s cheeky personality. Matt Fraction’s dry humor feels effortless and fits Clint’s characterization well. Together, Aja and Fraction have given readers a Hawkeye series that deserves your attention.
“Clint Barton a.k.a. Hawkeye, became the greatest sharp-shooter known to man. He then joined the Avengers. This is what he does when he’s not being an Avenger. That’s all you need to know.” –Opening credits
Most of the issues are one shots, or standalone stories. Characters like Kate and tracksuit mafia are reoccurring, but each issue tends has a new set of characters. A few issues have even changed the narration to mix things up. Usually the comic is from Clint’s perspective, but it was interesting to see Clint in Kate’s eyes. Lucky, affectionately known as Pizza Dog, got his own issue too. It shows the flexibility and the talent of Fraction and Aja to lay out a story with minimal dialogue but still convey as much as much depth and emotion. Hawkeye is great if you want to pick up any issue and start your collection from there, but proceed with caution. I smell a plot point in the works. 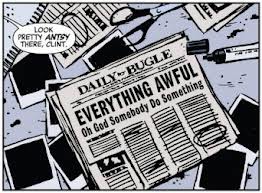 If there’s an issue that you want to start on, I recommend number 3. All Clint wanted to do was buy tape to label his arrows, but ends up racing in a 70’ Challenger to rescue his one-night stand from the tracksuit mafia. Sounds slightly trite, but Fraction’s dialogue and pacing along with Clint’s clumsy charm makes for fun adventure.

You can get start from the beginning with this series in the Hawkeye, Volume 1: My Life as a Weapon that contains issues 1-5 and Hawkeye, Volume 2: Little Hits with issues 6-11 available online or at local comic books stores now.