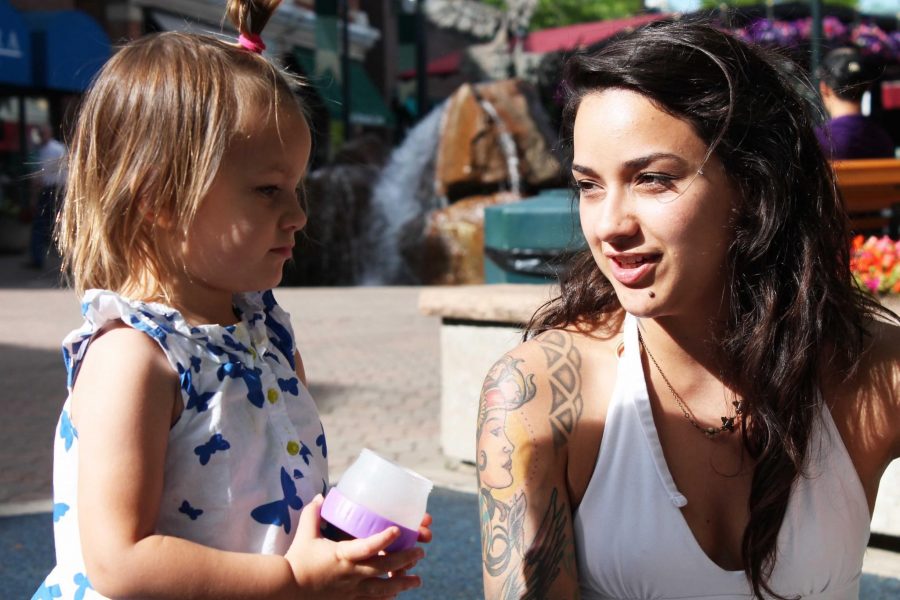 Vasquez watches as her daughter, Emma, plays in Old Town Square in Fort Collins. Vasquez hopes to open her own store front shop.

Sewing, fashion and design constantly fill Alexa Vasquez’s thoughts and dreams. But, that’s not all that’s on her mind. She is also thinking about the three nights a week she bartends at Mo Jeaux’s Bar and Grill, the homework she has to complete for her business classes, the home-based business she wants to move to a store-front and, most importantly, her responsibilities as a single mother to her 2-year-old daughter, Emma.

“I don’t sleep, that’s pretty much how that works,” Vasquez said of her busy schedule. “I don’t know what sleep is anymore; I drink a lot of coffee.”

Flashback about 20 years earlier and you would find Vasquez, who grew up in New Jersey, first learning how to knit, crochet and sew, marking the beginning of her love for fabrics and fashion.

“When she was in high school, she used to redesign her own clothing,” Vasquez’s mother Candida Marques said in a phone interview. “In other words, sometimes I would go out and I would buy her, for example, for prom, I bought her a dress — it was a gorgeous dress — but, she decided that she wanted to change it, so she went and she changed it and she made it better than what it was.”

Vasquez even won the praise of fashion design icon Georgio Armani during a summer course that she took at Berkley College in New York City, N.Y., while in high school.

“We went to the Armani headquarters and met Georgio Armani — he happened to be there — and he had us design a formal evening gown and he was going to critique them. He held mine up and his interpreter said, ‘She has the best one in the class and these are the reasons why,’” Vasquez said.

Vasquez planned to study fashion design and apparel in college after graduating high school, but in the end, decided not to. Moving around a lot, her life took several down turns to the point that she lived out of her car for a while. But, through and through her love for fashion remained strong and she eventually found home: Fort Collins, Colo.

“The past few months and the past few years have been really difficult for me, trying to find who I am and where I want to be, and moving out here six years ago was probably the best thing I could have done for myself because it made me really realize, ok, this [fashion design] is what you want to do and you are going to do it and that’s that,” Vasquez said.

When Vasquez found out she was pregnant, she became even more determined to turn her life around.

“I felt like I had no purpose, and I felt like I had nothing to do and no reason to be here and I was just going through the motions,” Vasquez said. “Having [Emma] completely changed that. I am a mom now and this is awesome. It came so natural to me, and I can never imagine my life now without having her.”

As she started to turn her life around, Vasquez received a new vigor to live out her dreams as a fashion designer. So, in 2009, she started her own business called Forever Fibers, and in spring 2013, began taking classes at Front Range Community College as a business major emphasizing in entrepreneurship and accounting. She plans to transfer to Colorado State University in two years. With a business degree she hopes to take Forever Fibers from Etsy, an online marketplace, to a actual storefront.

“My goal really is to get more people aware that you don’t have to buy a cheaply made product or something that was massly produced all over the world just to save a penny,” Vasquez said. “You can buy something that is really unique that will fit your style that was made right here in Fort Collins for the same price and it is going to last you longer.”

With quite a balancing act between school, work, her business and her daughter, Vasquez receives a lot of love and support from friends and family, especially from Emma’s father, Alex Pasquesi, who co-parents Emma with Vasquez.

“Her dad is awesome, too,” Vasquez said. “He helps out a lot, and whenever I get super stressed he is always just right there calming me down.”

Entrepreneur and local glass artist, Pasquesi said he believes transitioning to a storefront will help Forever Fibers get more attention.

“I would completely support her in [moving to a store front],” Pasquesi said in a phone interview. “Definitely, I think she has the talent to show off an inventory line. She not only sews but crochets and she knits, and she does kind of the whole line there, so she would be able to produce a pretty broad line of products and definitely fill a store up with it. It’s kind of what she needs; it’s the next step to get more eyes on her products.”

Although Vasquez has experienced several ups and downs in her life, she said she feels like everything is finally falling into place.

“I feel like there is no more major mountains that I need to climb or major things that are going to set me back,” she said. “I can just see the light and it’s all there and the only place I can keep going is up.”

Ultimately, if you set your mind to something, you can accomplish it, something Marques said defines Vasquez’s drive and ambition.