Imagined Soundtracks: Songs that John Hughes totally would have used if they had been around 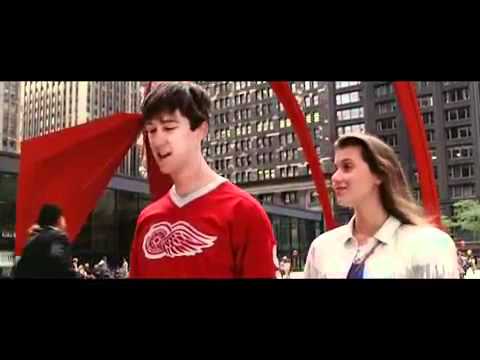 I love John Hughes. This is a well known fact about me. I only brought four DVDs with me when I studied abroad and one of them was Pretty in Pink. I cried the first time I saw The Breakfast Club on TV at age thirteen. I have watched Sixteen Candles on my birthday every year since I turned fifteen. So this is making me sound like the world’s biggest Molly Ringwald fan, which I am, but I promise that my love for John Hughes is expansive. One thing that I love about him was his love and appreciation for music and the perfect use of it in his films. He used to take the cast of The Breakfast Club to concerts on the weekends, he would consult Molly Ringwald for ideas for songs for films. He is the reason why we all lift our fists in victory whenever “Don’t You (Forget About Me)” ends. And do I even need to bring up that iconic scene from Ferris Bueller’s Day Off? I don’t. But I did anyway.

When I listen to my iPod or hear a song on the radio, sometimes I hear a song that I get a particular Hughes vibe from and over the years I have compiled a list of songs that I am convinced John Hughes would have put on one of his soundtracks had it been around. I know that not all of these songs have that mid-80s feel, but something about them just totally lead me to believe that John Hughes would have seriously dug them. Here are a few highlights from that list.

1. Still Life by The Horrors

Off their 2011 album Skying this song has everything it needs to make it onto a Hughes soundtrack. It has that 80s synth that is so familiar and it builds well. I totally imagine this song would be used in a slightly darker coming-of-age story starring Judd Nelson and this is the scene where he and the girl he is finally letting himself love kiss in the back of his dad’s truck or something.

Molly Ringwald’s character Andie in Pretty in Pink goes to a gritty nightclub with her record store boss and her loyal friend Duckie when he can get let in. Her new “richie” beau Blaine doesn’t quite fit in and is painfully uncomfortable when they hang out there. I just imagine this is the band that is playing one night and Blaine complains about needing ear plugs.

A female protagonist. Maybe not Molly Ringwald, but some other female protagonist is trying to prove to herself that she doesn’t need the guy that she so desperately wants and her pseudo-feminist best friend puts on this song and they dance it out at work.

But if we are being serious he would probably have used this remix:

4. Disco Biscuit Love by The Jezabels

I always have this montage playing in my head where it cuts between the two main characters you know maybe one is in their car and the other is walking and it is dark out. Definitely raining. Again, the guy is probably Judd Nelson because is just darker than the other members of the Brat Pack. Could be young Rob Lowe though. And the guy is rough and from the “wrong side” of the tracks. The girl still loves him but knows they can’t be together until he eases up on the drugs. She broke up with him a few weeks ago but she still misses him. He just promised to quit and is going for a walk to try and shake of the cravings. She sees him walking down the street and she dramatically pulls over. He is soaked through and they kiss in the middle of the street. While this song is playing.

5. Say You Don’t Want It by One Night Only

I just imagine this song coming on the radio during some epic road trip. Why didn’t John Hughes ever make an epic coming-of-age road trip movie. Like St. Elmo’s Fire but on the road. They’re driving from Chicago to L.A. so the one aspiring actress in the group can make it big but they all go to support her and see her off. This probably comes on when they cross the California border.

Of course there are many, many more songs on my list so a part two may be needed.