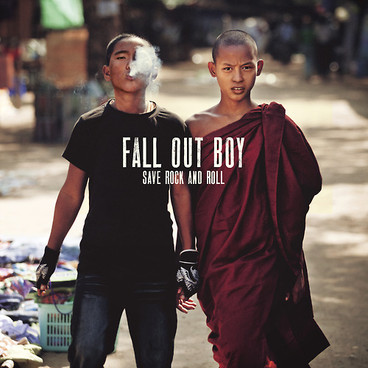 Put on your war paint because the bad boys of pop punk rock are back! After a four year hiatus Fall Out Boy is back and better than ever with their brand new album entitled, Save Rock and Roll. Before I delve into the sensation that is their new release let me give you a little history of the band and their music.

Consisting of members Pete Wentz, Patrick Stump, Joe Trohman and Andy Hurley, Fall Out Boy was formed back in early 2001. The band took their name from The Simpsons character, Radioactive Man’s boy sidekick. After releasing not too popular mini-albums and playing a few shows every here and there the band released their first full length studio album on May 6th 2003 via Island Records. The album, Take This To Your Grave, spawned the popular singles “Grand Theft Autumn/Where is Your Boy” and “Saturday.” The boys were beginning to create some buzz about themselves and in 2005 the band rose to success with the release of their album From Under The Cork Tree also via Island Records. The album contained the smash hit single “Sugar, We’re Going Down” which peaked at number 8 on the Billboard Hot 100 and the follow up single “Dance, Dance” also making it to the top 10 peaking at number 9.

Enjoying their success Fall Out Boy realized their third major label album Infinity On High in early 2007. The album displayed a different sound for the indie punk band as they began to sound more pop punk. The album spawned the hit “This Ain’t A Scene, It’s An Arms Race” which peaked at number 2 on Billboard. The follow up single “Thnks fr th Mmrs” was also popular peaking at number 11. In Late 2008 FOB followed up Infinity with the new album Folie à Deux. Sporting a more grungy pop rock sound the album wasn’t as popular as the last few albums with the lead single, “I Don’t Care” reaching number 21 on Billboard. Almost a year later in November 2009 the band released the Believer’s Never Die- Greatest Hits album and announced three days later that the band was going on an indefinite hiatus to the shock and dismay of all their fans, me included.

That leads us to the now. You can imagine the excitement and joy of fans everywhere (including me) when after four years and a few unsuccessful solo careers, the band announced in February that they were back and working on a new album!! What was even more exciting was the release of the band’s new single “My Songs Know What You Did In The Dark (Light Em Up)” right after the announcement. The new album, Save Rock and Roll became available for pre-order on itunes on March 24th with the promotional single “The Phoenix” being made available for download. With the full album being released not too long ago I can most definitely tell you that this is some of their best work.

On Save Rock and Roll Fall Out Boy returns with everything fans loved about their previous albums: creative and unique lyrics, rocking guitar riffs, and soaring vocals. The band even experiments with a few new sounds. I detect a hint of some synthesizers on a few songs and “Young Volcanoes” sounds like a fun summery FOB anthem. The album features a host of guest appearances (which is kind of a first) including Foxes, Big Sean, Courtney Love and the one and only, Elton John. The whole album feels like the grungy pop rock of Folie à Deux only evolved to a whole new level of awesomeness. The in your face guitar riffs and rocking beats combined with Patrick Stump’s better than ever vocals and Pete Wentz’s crazy lyrics all makes for a musical experience that is unforgettable.

As far as my favorite songs, the album’s charged opener, “The Phoenix” is one that constantly get’s stuck in my head along with the album’s fiery lead single “My Songs Know What You Did in The Dark (Light Em Up)” Check out the music videos for both below. Along with those two “Alone Together,”  “Miss Missing You” and “Rat A Tat” would have to be my other top picks. What I love about the songs on this album is that they make me want to simultaneously dance around and pump my fist in the air in a way that only a Fall Out Boy song can. The whole album is definitely a journey with catchy hooks and sky rocketing choruses that were worth waiting four years for. Check out the Fall Out Boy website for more info on the band and try and catch the boys on the Save Rock and Roll tour going on right now. Be sure to go and download the new album and definitely check out all the songs and albums I mentioned above. Decide for yourself whether or not Fall Out Boy really saves rock and roll.