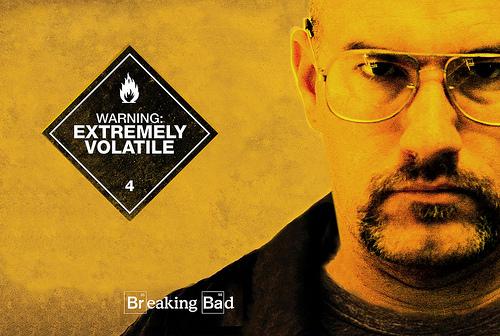 If you steal something from a celebrity, keep your mouth shut.

Xaviar McAfee was arrested  in late March 2013 after allegedly blabbing to some folks at a bar in Albuquerque, N.M. about how he so cleverly smashed into AMC star Bryan Cranston’s car and took his personal items and a copy of the latest script from beloved  TV drama Breaking Bad’s final season.

This supposed confession was overheard by an anonymous source who told Cranston’s employee, Taryn Feingold, as well as the  Bernalillo County Sheriff’s Office about what he or she recalled from the bar. The thief was waving what looked like Cranston’s iPad around to his friends and saying how he snatched it as well as the missing script.

If we’ve learned anything from the series, it’s to never mess with a very bald man whose life, or in this case,series, is about to end. Police arrested the 29-year-old man and charged him with burglary. He’s now being tight-lipped about the actual location of the script, which authorities are trying to find.

Cranston reported that someone had stolen the script as well as his iPad and a shoulder bag with various personal items that probably don’t include any chemistry tools or crystal meth.

The Breaking Bad series is in its final season wherein Cranston plays Walter White, the beloved yet feared chemistry teacher-turned meth chef with terminal cancer. The script has not halted the production of the final few episodes, but still needs to be found so no one opens their mouths about anything else that will get them in trouble.