If the overused cliche “a picture is worth a thousand words” was taken literally, then Ransom Riggs’ debut novel Miss Peregrine’s Home For Peculiar Children would have about 44,000 extra words. The novel already has over 300 pages to it which means adding all those other words would make it the next YA War and Peace. This is probably why Riggs chose to use pictures instead of more words to supplement his story and help to emphasize the fact that every word he did use is worth reading.

Lately it’s as if you can’t exist in this world without hearing about the latest teen paranormal romance craze. People of all ages are devouring fantasy novels with the grace and gusto of Augustus Gloop. But where books about vampires and werewolves are growing tired, Riggs has developed a cure for the PTSD the end of the Harry Potter series left us with. Through the incorporation of real vintage photographs Riggs tells a story that has never been told before. A story about Jacob Portman, a Florida teen, who has always felt out of the ordinary. His entire life his grandfather has told him tales of his childhood that couldn’t possibly be true. However, when his grandfather dies Jacob starts to think the stories may be less fictional than he originally believed. So Jacob and his father travel to Wales in search of the Headmistress of the home his grandfather grew up in, and that is when things get a little…peculiar.

The story itself is unique and could hold its own without the added visual aids, but the peculiar black and white photos that pop up throughout the novel add a chilling sense of realism that many books, especially fantasy books, lack. Suddenly these characters are given faces, their peculiarities are explained and the reader is left wondering where the original photographs came from. The only logical explanation could be Miss Peregrine’s photo album. The book ends with a set up for a sequel, so it will be interesting to see how Riggs continues to play with this style.I would venture to say that this is one of the best books I have read in a while, especially out of books that have been published in the past year (Miss Peregrine was released last June.) I am excited to see how it progresses as it gains more popularity and grows into a series. I would personally love to see a film adaptation as well, which also seems be a possibility.

Since the style of this book is what struck me the most on my first read through, I decided I wanted to try it myself by coming up with short book synopses based entirely off of randomly generated images that are popping up on the right hand side of the screen as I type this.

Jeff Blume is a college graduate working in an entry level job as a clip art creator. He is constantly taking complex ideas and turning them into simple images. This power, if in the hands of anyone else, would most certainly cause a God-complex however Jeff just finds it to be mundane and below his skill level. That is, until everything changes. In this thrilling tale Jeff discovers that he holds more power than he realizes when someone is using his clip art for dark magic, turning all of the real objects Jeff has adapted into their actual clip art counterparts. Will the world ever be the same? 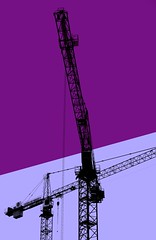 Crane Shifter
When Anna’s father died in a construction accident, she thought her family would never be the same. Even though she was so young, Anna had to step up and help care for her younger brothers. Just after her 18th birthday, Anna decides to research the accident that killed her father. Something her mother never allowed her to do before. In her research she discovers that the whole accident is shrouded in mystery. Anna discovers that she may be more mysterious than she thought as well when odd things start happening when she is around construction equipment. Could Anna be the key to figuring out the mystery of her father’s death?