The Rocky Mountain Collegian • May 3, 2022 • https://collegian.com/articles/news/2022/05/category-news-students-frustrated-with-university-conflict-resolution-processes/ 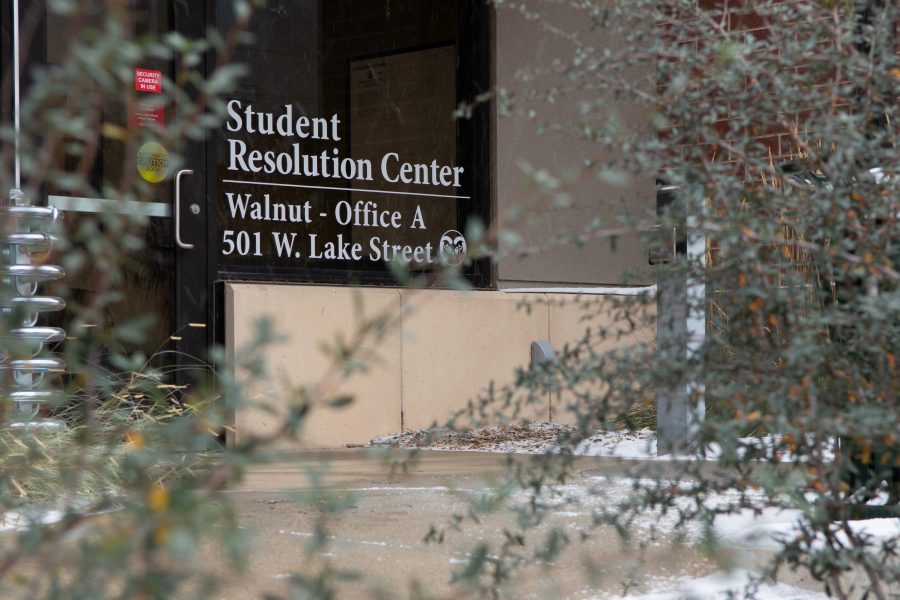 The Colorado State University Student Resolution Center located on Lake Street Oct. 27, 2019. It is an office where students can report harassment-related incidents.

In March and April, Abby Weaver experienced multiple situations in her residence hall with a fellow resident that made her feel unsafe.

A male resident in her hall repeatedly made verbal threats to Weaver, had frequent anger outbursts that involved screaming at Weaver and showed up at her dorm multiple times, Weaver said.

After an anger outburst March 29, Weaver and her suitemate, Avery Aasmundstad-Williams, went to their resident assistant, who filed reports on their behalf to the Student Resolution Center, a place for Colorado State University students to file incident reports or get help with conflicts. Their RA listed them as the victims of the situation and labeled the incident as a physical threat, according to Weaver.

The initial incident that happened with the student who made Weaver want to file was when the resident screamed at Weaver and Aasmundstad-Williams in the lounge, Weaver said.

“He gets these anger outbursts at times, and he got one of them that was very overdramatic, and he started talking about how he’s gonna kill us and he’s gonna snap one day,” Weaver said. “Even from last semester he would make jokes like, ‘I think it’s funny if I chase women at night’ or something like that. And he’s had a couple times where I ended up being in the room where he’s been screaming at me.”

The student showed up to Weaver’s dorm April 2, appearing intoxicated, Weaver said, and he showed up again April 4. At this point, Weaver and Aasmundstad-Williams were scared and wondering when the SRC was going to update them on the case, as they had heard nothing.
“We contacted the Student Resolution Center, and I had to contact them two or three times before they actually told us anything.” -Abby Weaver, CSU student
According to the SRC website, student conduct services offers “one-on-one meetings to discuss alleged violations of the Student Conduct Code. Hearing officers listen to student perspectives, determine responsibility, ensure accountability and provide educational and restorative outcomes when appropriate.”

When students create an incident report on the website, they are asked for their personal information and to report the nature of the incident. The options are emergency transport; sexual misconduct, gender-based harassment, relationship/dating violence or stalking; sexually explicit drawings, writing or language; physical abuse or threats; concern about a student’s mental health; all other student conduct incidents and apartment policy incidents. The incident report also asks about other people involved in the situation and their roles, which can be a victim, a witness, alleged or information only.

Michael Katz, director of the Student Resolution Center, wrote in an email to The Collegian that when the SRC evaluates an incident report, they first look to the Student Conduct Code to see if the actions reported are prohibited by it. If it’s determined the actions do violate it, a hearing officer gets involved to determine if they need a student conduct hearing or if something else could be done to address the situation.

If the action doesn’t violate the Student Conduct Code, the student may be referred to another resource. If the report involves “gender-based interpersonal violence,” the case is immediately given to the Office of Title IX Programs and Gender Equity to be handled, Katz wrote.

April 7, Weaver got an email from the Title IX office saying they handle incidents of “sexual harassment, sexual assault, dating violence, domestic violence, stalking and/or retaliation that the University is made aware of” and that a responsible employee at CSU indicated Weaver was “impacted by an incident of this nature.”

“Title IX was basically like, we have heard the case; we can set up a video call to talk about your options,” Weaver said. “And the Title IX people were probably the best compared to the resolution center.”

With Weaver’s busy schedule and having only a few weeks left in the semester, she didn’t have time to talk with Title IX about the options.

Title IX Coordinator and Director Araiña Muñiz wrote to The Collegian that any stalking reports or reports of feeling unsafe around other students on campus are processed by Title IX.

“The Title IX office outreaches to any identified impacted parties with resources and information on policy and process with an invitation to meet with someone from the Title IX Office,” Muñiz said. “We define ‘impacted party’ as the person who experienced the inappropriate, violent or harmful behavior.”

Muñiz wrote the office will discuss resolution options with the impacted party, but Weaver said she and Aasmundstad-Williams opted not to meet with Title IX because of their schedules.
“I would encourage any student who has a specific concern about how a case was handled … to reach out directly to me, and I would be happy to talk to them and provide any information that I am permitted to share.” -Michael Katz, Student Resolution Center director
As of now, Weaver and Aasmundstad-Williams have not received information about the case. Weaver has not received any more information or been reached out to by the Title IX office since an April 14 email from a Title IX case manager, who told her the Title IX coordinator and the people from student conduct were looped in on the situation.

Throughout the process, Weaver and Aasmundstad-Williams were referred to their resident director by the SRC a few times. In their chat box with the SRC, the SRC said, “Your RD is the person who is reviewing your case, so it would be beneficial to speak with them.”

Weaver said she repeatedly emailed the SRC and used the chat box on their website to get more information, none of which lead to giving her real updates.

“We contacted the Student Resolution Center, and I had to contact them two or three times before they actually told us anything,” Weaver said. “When they did, they sent kind of a bug off email. … It was like pulling teeth trying to get someone to tell us (if they) at least talked to the person we had to report.”

Katz wrote that while the SRC is committed to supporting students, they have a legal requirement to protect students’ privacy, which is why they cannot discuss information about cases.

“Protecting students’ privacy is a legal requirement outlined by the Family Educational Rights (and) Privacy Act, or FERPA,” Katz wrote.

Essentially, every university that receives federal funding has to follow FERPA, which protects students’ privacy. Because of this, the Student Resolution Center cannot legally share any information with a student about an investigation regarding someone else, even if they reported it.

Due to FERPA, if you make a report about another student with the SRC, there’s no guarantee you will ever hear more information about what happened in that case. The only exception would be if a hearing officer determined you to be an impacted party. Even if you list yourself as the victim when you make your incident report, a hearing officer will still decide if you are the impacted party, which determines your further role in the case.

“I would encourage any student who has a specific concern about how a case was handled … to reach out directly to me, and I would be happy to talk to them and provide any information that I am permitted to share,” Katz wrote.

Editor’s note: The original version of this article stated, “The student showed up to Weaver’s dorm April 2 appearing intoxicated and looking for her, Weaver said, and he showed up again April 4 looking for her.” The article has since been updated to be more accurate.