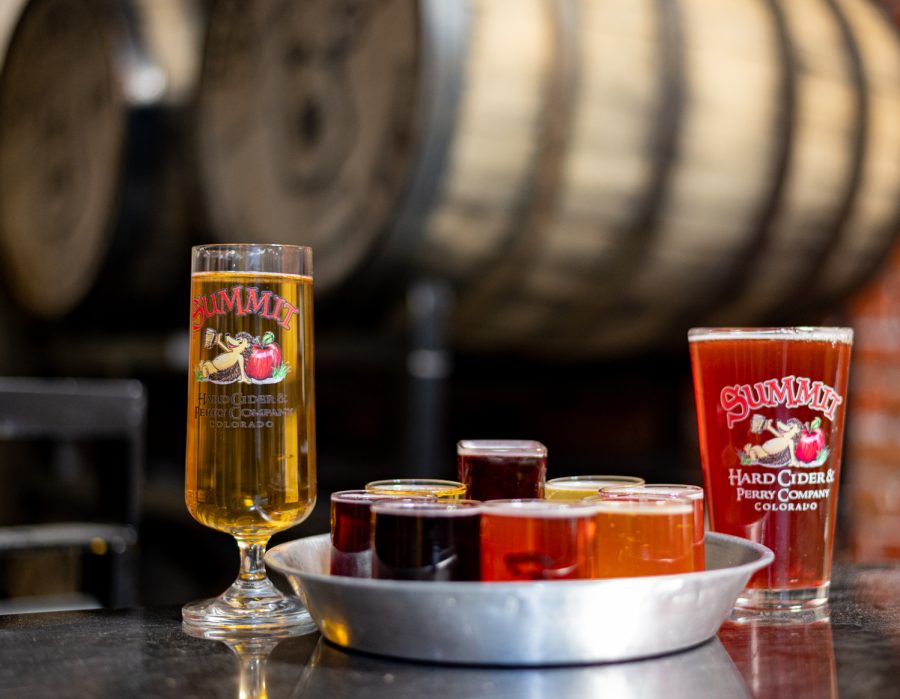 A flight of available ciders at Scrumpy's Hard Cider Bar and Pub in Old Town Fort Collins April 10. "A scrumpy is someone who steals apples out of an orchard," owner Jennifer Seiwald said.

The city has a lot more to offer than that, of course, but beer — and the model of a local craft brewery in particular — is so central to the city’s culture that we decided to make an entire newspaper edition dedicated to the topic.

However, for folks who have an allergy or intolerance to beer or just don’t like it, their options are much more limited if they want to sit on the patio of a local business and enjoy an alcoholic beverage with friends on a nice Colorado day.

As an alternative to beer, Fort Collins’ locally owned and produced Summit Hard Cider and Perry Company offers a wide variety of alcoholic ciders, including some made entirely from Colorado apples.

Jennifer Seiwald created Summit Hard Cider, which opened in 2012, alongside her husband after deciding to make a career change and discovering she had a mild allergy to hops, a component found in most beers that adds flavor and aroma to the drink, according to Learning to Homebrew.

Seiwald said starting a business was her version of a “planned midlife crisis,” and when she decided she wanted to change careers, she initially went back to school to study sciences, thinking she might end up in the medical field. However, when she determined drinking cider did not give her the same asthmatic reactions as drinking some beers did, she looked into making cider in Fort Collins — something no one else was doing.
“Mixing and matching and thinking out of the box and walking down the soda and soft drink aisle in the grocery store to see what the popular flavors are has been inspirational to me.” -Jennifer Seiwald, president of Summit Hard Cider and Perry Company
“I found classes were available in the Pacific Northwest as well as in England, and I took a combination of classes both places and learned an awful lot about cider, and then that combined with my recent chemistry background gave me the confidence to open up a cidery,” Seiwald said.

Summit sells its product out of Scrumpy’s Hard Cider Bar and Pub, owned by Seiwald, and is also available at various locations around the Northern Colorado and Denver areas. Selections include typical apple ciders and unique fruit combinations, including blueberry lavender, strawberry basil, rasbeñero and chocolate cherry.

Seiwald creates and experiments with all of the flavors Summit sells and said the process of creating a new flavor from “twinkle in my eye to coming out of the tap” takes about four months.

“I’ve always loved crazy flavor combinations, so my love of cooking and my tastebuds helped me figure out different flavors,” Seiwald said. “I spent quite a bit of time when I was taking my cider classes … sampling and tasting, but then I put my own special spin on it.”

She found combining a fruit flavor with something else to balance the overall sweetness of the drink makes a great cider, like the blueberry lavender, which she said is their most popular.

“Mixing and matching and thinking out of the box and walking down the soda and soft drink aisle in the grocery store to see what the popular flavors are has been inspirational to me, as well as trying to use local produce whenever I can,” Seiwald said.

Seiwald also said she really loved the British style of ciders she tried when studying in England but realized she would not be able to replicate them because the same types of apples do not grow in Colorado. This aspect is important to Seiwald because in every drink she makes, she said she tries to use at least 30% local produce.

Due to the irregularities of Colorado weather, Seiwald said she cannot rely on Colorado crops for her entire product, but Summit does make two drinks — Dances With Squirrels and Jenny Wren — exclusively from Colorado apples.

In 2016, Seiwald acquired Branch Out Cider, a business that used a community orchard model to make hard cider. Since then, Summit received a grant from the United States Department of Agriculture to purchase a “mobile juicing trailer” that allows them to travel around Colorado and juice unwanted fruit from local orchards. Seiwald said they juice between 600,000-850,000 pounds of fruit that normally would have been thrown out.

While Summit will take some of that juice for their ciders, they’ll also pasteurize the juice on-site, Seiwald said, and sell it back to the orchards “so they can have a Colorado value-added product at their fruit stands and farmers markets.”

Seiwald said they juice peaches, pears, cherries, apples and plums with the juicing trailer and turn the juice into alcoholic and nonalcoholic beverages. Now, instead of harvesting individual trees in Fort Collins, Seiwald said they will host juicing days where people can bring their apples to turn into nonalcoholic beverages with whatever juice leftover going into Summit’s 100% Colorado apple drinks.