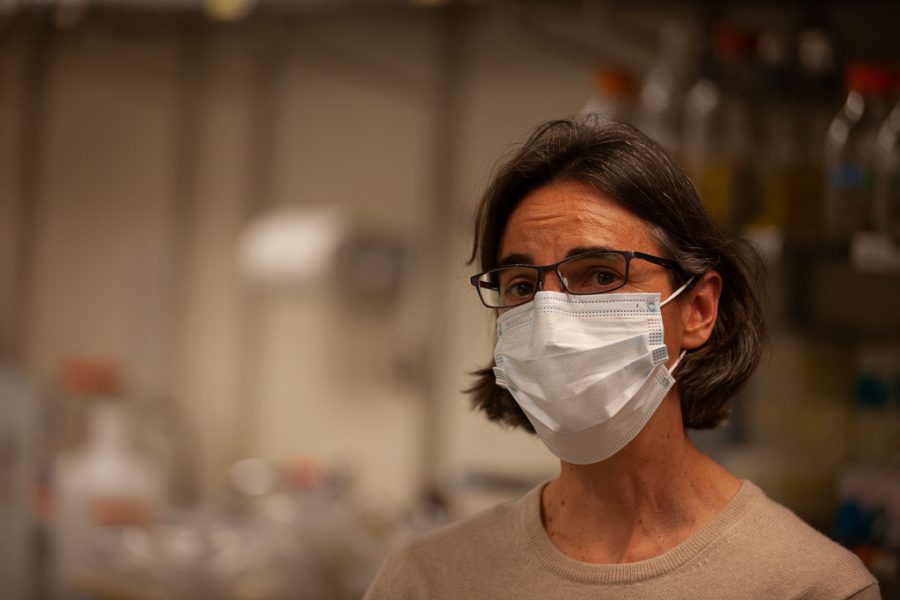 Mary Jackson in her lab in the Microbiology Building March 4, 2021. Jackson was leading a team researching a bacillus Calmette–Guérin vaccine for COVID-19. Now, Jackson is also involved with a study using anti-malaria drugs for pulmonary infections.

A Colorado State University research team discovered a possible treatment for pulmonary infections, and the team’s findings were published in the Feb. 23 issue of Science Translational Medicine.

Pulmonary infections have been difficult to treat due to side effects of current antibiotics, and current treatments are not always effective, CSU professor Mary Jackson said.

Jackson, the principle investigator for the study and professor in the department of microbiology, immunology and pathology, said the discovery is significant because of the prevalence of nontuberculous mycobacterial infections.

Jackson said this discovery started from work done in her lab on nontuberculous mycobacteria, known as NTM, which was aimed at developing tools to study them.

During this research the team discovered, like tuberculosis, NTM is likely able to survive in the lungs long enough to develop into a chronic infection. This led the team to believe that if they could keep NTM from being persistent, it would likely be easier to kill them with antibiotics, thus clearing the infection, Jackson said.
“(This compound would) bring another antibiotic with a completely different mechanism of action to the market.” -Mary Jackson, CSU professor of bacteriology
This is why the research team focused on a regulator, DosRS, in Mycobacterium abscessus, according to the team’s paper on the findings.

DosRS is “a regulator that regulates the expression of genes in the bacterium” which, as scientists know from tuberculosis, is “important for persistence,” Jackson said. The team had the goal of determining whether this regulator is also important in NTM.

Through their research, the team found the regulator is essential for the persistence of NTM and that when mice are infected with NTM, scientists can use inhibitors of the regulator to “clear the infection just as well as if we were using any standard of care antibiotic that’s currently on the market,” Jackson said.

According to a CSU SOURCE article about the team’s findings, “they found that in mice, two existing anti-malarial drugs were able to prevent DosRS from responding to stresses, meaning that the bacterium struggled to fight off antibiotics and the immune system’s natural disease response.”

Jackson and her team are continuing their research to get a better understanding of why their treatment works. Jackson said the team is exploring a few different possibilities.

“It might be inhibiting other proteins in the bacterium itself, … and the second hypothesis that we are addressing right now is whether these molecules are not enhancing or boosting our immune system in a way that would make it more efficiently cure those nontuberculous mycobacteria,” Jackson said.

Jackson and her team’s discovery is significant considering the drug is already being used to treat malaria, has already been tested and confirmed to be safe in humans and would just need to be tested to confirm its efficiency in treating NTM infections. This is a step the team is hoping to take with National Jewish Health in Denver.

The team is working to partner with National Jewish Health because “they have a lot of patients infected with nontuberculous mycobacteria that they are currently treating, including patients who typically don’t respond very well to any standard of care antibiotics,” Jackson said. “And so they would be willing to test this new molecule to see if it improves the treatment outcome of these patients who are not responding well to other drugs.”

If successful, the compound being tested by the research team would “bring another antibiotic with a completely different mechanism of action to the market,” Jackson said, aiding in the treatment of patients with NTM infections.