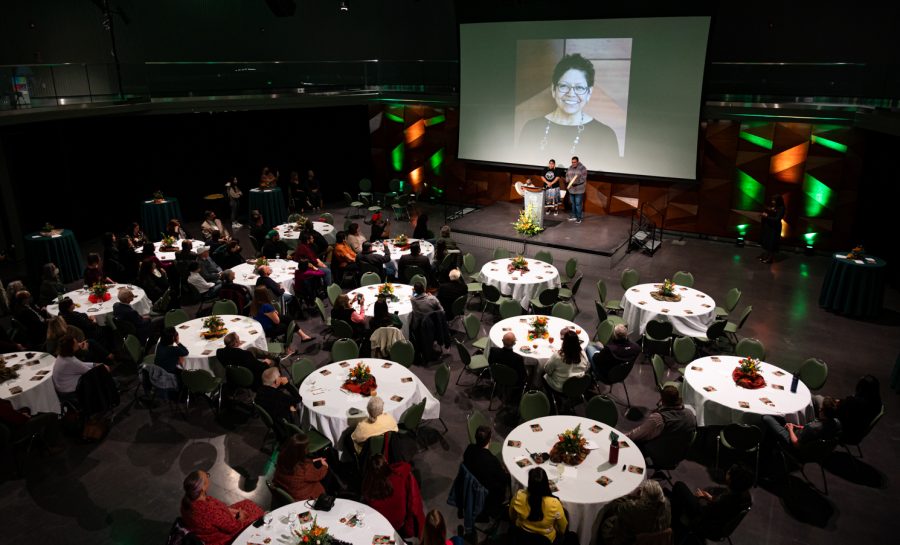 For half a century, Mary Ontiveros dedicated herself to Colorado State University.

Ontiveros worked as a CSU employee for 45 years, retiring a little over a year before her death this February. In that time, she took on many roles, advocated for accessibility for students — especially those from marginalized backgrounds — and helped build CSU into the institution it is known as today.

“Mary will always be with us, and that for me is the most important thing to remember,” President Joyce McConnell said at the memorial service. “She’s the architect of the Principles of Community. That’s a profound legacy that Mary leaves for all of us, but also in this room is her profound legacy: her family, her friends, alumni, colleagues, students, people that she’s touched through the two and more generations that she dedicated her life to CSU.”

As McConnell said, Ontiveros was fundamental to creating the Principles of Community and also contributed to the creation of the Student Diversity Programs and Services, Project GO, the Native American Legacy Award, the TRIO Programs, the Alliance Partnership, scholarships for first-generation students, putting gender inclusive restrooms on campus and more.
“As the first woman and Mexican-American in a major leadership role at CSU in the ’60s, ’70s, ’80s, ’90s, 2000s, she experienced unbelievable sexism, racism, classism over all of those years, and yet she got up every morning and wanted to come to work, positive and determined to make a difference in the lives of those she touched.” -Blanche Hughes, CSU vice president for student affairs
Ontiveros worked in the CSU admissions office for over 20 years before becoming the first vice president for diversity in 2010. There, she removed access barriers to CSU, including changing the admissions application to allow for last names with fewer than four characters, said Shannon Archibeque-Engle, CSU associate vice president for inclusive excellence.

“Much of what defines Colorado State University regarding diversity and access can be traced directly back to Mary O.,” Archibeque-Engle said.

At Monday’s memorial service, tables had centerpieces with tulips, Ontiveros’ favorite flowers, and scarves because she never went anywhere without one. Food provided after the service included “dressed up” popcorn, one of Ontiveros’ favorite things, and small bottles of hot sauce to take home because that was another thing she always took with her.

A seven-piece mariachi band also played before and after people spoke about Ontiveros, as that was something else she loved.

Blanche Hughes, CSU vice president for student affairs, said one of the things she appreciated most about Ontiveros was her commitment to her family.

“She always talked about her family, and somehow she was able to bring those things together,” Hughes said. “As much as she worked and loved her CSU family, she also loved her family, and so I want to take a minute to just thank her family for sharing Mary with the rest of us for all these years. That was a sacrifice for you but an honor and a privilege for us.”

Many people, including Hughes and CSU System Chancellor Tony Frank, spoke on Ontiveros’ resilience. Frank said Ontiveros was “good at getting unstuck” when faced with challenges, and that’s what he will continue to carry with him now that she is gone.

“As the first woman and Mexican American in a major leadership role at CSU in the ’60s, ’70s, ’80s, ’90s, 2000s, she experienced unbelievable sexism, racism, classism over all of those years, and yet she got up every morning and wanted to come to work, positive and determined to make a difference in the lives of those she touched,” Hughes said.

Ontiveros contributed a lot to CSU, but everyone who worked with her remembered her more for who she was and how she inspired them than any one thing she did. Hughes said she will “embrace the memories of her calmness, her wisdom, her love of family and friends” and her love for CSU.

Ontiveros was humble, said Ria Vigil, CSU assistant vice president for inclusive excellence. She was the hardest worker and made sure people could not say she was undeserving of her position, Vigil said.

“Mary had your back,” Vigil said. “I always knew that Mary had my back. … She would give me credit for my work, she would listen but support me if I was criticized and she would elevate contributions I made.”

To learn more about Ontiveros’ impact on CSU and her own perspective on her time here, read The Collegian’s story about her written at the time of her retirement.