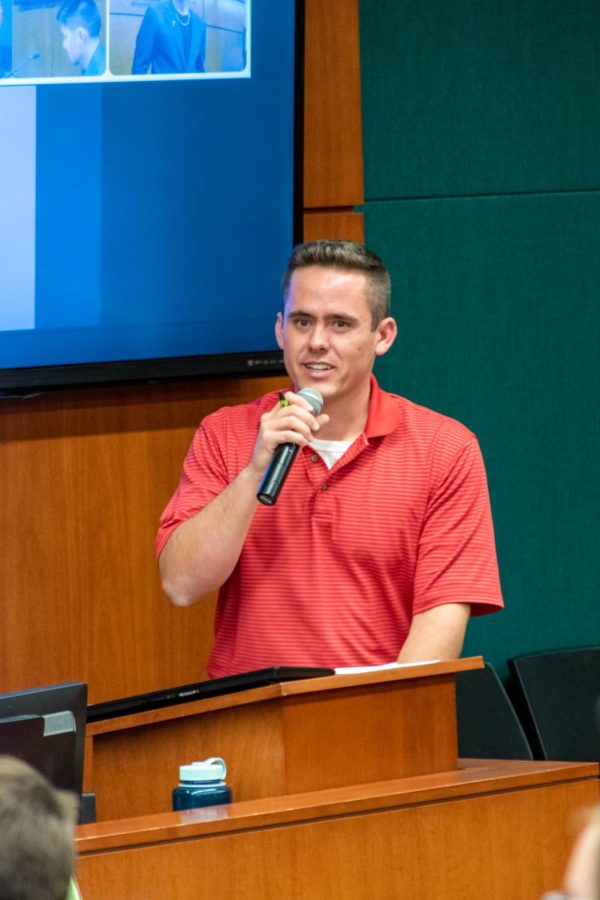 As the 51st senate of the Associated Students of Colorado State University came to a close, they passed new legislation, heard speeches from seniors and swore in the new president, vice president and speaker of the senate.

In his final report, President Christian Dykson spoke about the work he has done throughout his time in ASCSU, the impact the organization has had on him and his hopes for leaving behind a legacy.

“It’s not a goodbye because the legacies and advocacy that I inherited and the one that I hope to leave behind is not a legacy of passivity but of resounding commitment,” Dykson said. “I believe that the hallmark of student government is to ensure that every student voice is heard in the governance of our community and that’s a challenge that you all will have moving forward. … Never underestimate the power of love and dignity and respect and its ability to … unite 30,000 students.”

ASCSU moved on to the legislation for the night, starting with Bill 5131, “Ensuring Funding of Senate’s Legislative Priorities Act of 2022,” which would move $13,562.50 from the ASCSU Fund Balance to the ASCSU Senate Discretionary. This bill would ensure Bill 5124 and Bill 5129 have a chance to pass. The bill passed.

“Passing this resolution tonight is going to kind of state that we as a large student organization support the promotion of safe sex here on campus (and) promote the education and the resources put out by the (CSU) Health Network,” said Alex Silverhart, chair of the Budgetary Affairs Committee and senator for the College of Veterinary Medicine and Biomedical Sciences.

ASCSU also heard Bill 5129, “Funding Accessibility,” which seeks $8,000 for an automatic door opener at the men’s restroom on the first floor of the Pathology Building, responding to a request a student made to the Student Disability Center. The bill passed.

Bill 5130, “Remembering Our Lost Rams: ASCSU-Honor Guard Memorial March and The Tree Memorial — In Loving Memory,” establishes the ASCSU-Honor Guard Memorial March Tradition, which recognizes CSU students who have passed away, and allocates $15,000 for the development of a memorial west of the Lory Student Center, called The Tree, for CSU students who have passed away. The bill passed.

ASCSU heard Bill 5124, “Funding for SDPS Offices.” Parliamentarian Kevin Clark presented changes, including the addition of a sunset clause by the Budgetary Affairs Committee, and the bill passed.

ASCSU also heard Bill 5125, “Approval of the 2022-23 Executive Job Descriptions.” Clark presented changes made by the committees. The senate then debated whether the director of diversity and inclusion, director of traditions and programs, director of health and wellness and director of housing security should receive $920 for five or 10 hours of work per week over the summer. The bill was changed to five hours and passed.

The last piece of legislation that ASCSU heard was Bill 5128, “Approval of the 2022-23 ASCSU Budget.” ASCSU debated whether the chief justice and speaker of the senate should be paid the same as the vice president or president.

“Pay doesn’t necessarily equal equity because the president tends to do so much more work even though they’re assigned the same amount of hours,” Silverhart said. “Seeing how much President Dykson did this year, it doesn’t seem possible to pay the chief justice and the speaker of the senate the same amount as the president because of just the caliber of work the president is doing.”

Some senators expressed concern that a pay difference between the president, chief justice and speaker of the senate would create conflict between branches.

“I feel that it would only cause inner branch conflict in the future,” said President-elect Robert Long.

The senate voted to pass the Budgetary Affairs Committee change. The senate also voted to increase payroll by 12.5%. The bill passed with these changes.

The meeting ended with the swearing in of Long as president, Elijah Sandoval as vice president and Nicholas DeSalvo as speaker of the senate.