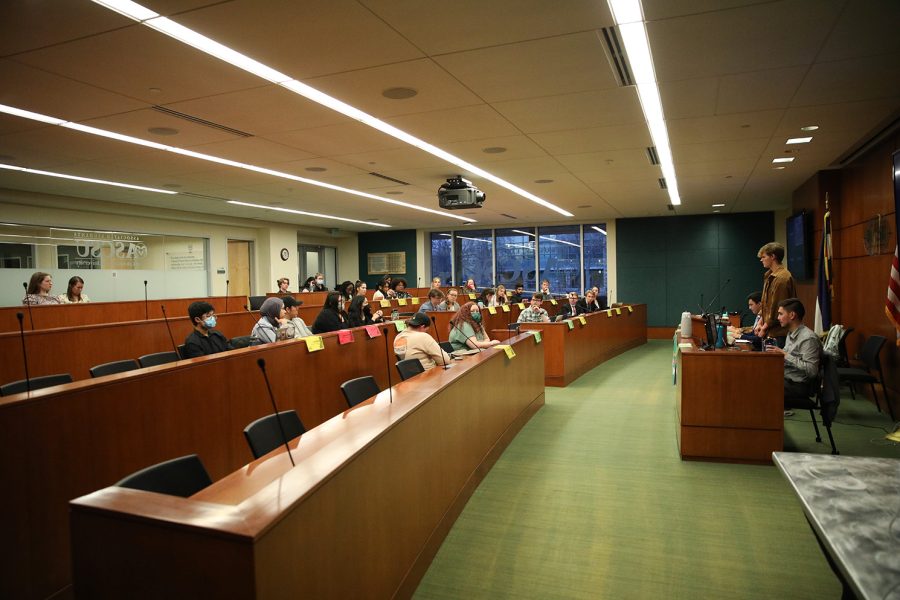 ASCSU began with Bill 5118, “Supporting the Bike Security Package.” This bill seeks funding for the bike security proposal. The bill would allocate $14,062.50 from the Senate Discretionary Fund to the Alternative Transportation Fee Advisory Board for U-locks and a bike camera outside of Academic Village Engineering.

“The big goal that I think Kyle (Hill) and I both had was to really pull together a bunch of campus groups and students that really want to show that passion that this is a bike-friendly community, and we want to make sure of this for our students,” said Benton Roesler, director of housing security and co-author of the bill. “We want to make sure that we meet every accessible need that they have to make sure that they can bike to this campus safely, comfortably and they won’t have their bikes stolen.”

Bill 5119, “ASCSU Budget Reconciliation Act,” would reorganize ASCSU’s executive budget. This would relocate some funds that are currently unable to be utilized. The bill will be sent to the Budgetary Affairs and University Affairs committees.

ASCSU also heard Resolution 5109, “Calling for Student Debt Cancellation,” which is a statement in unison with over 120 student government associations across the U.S. calling for federal cancellation of student debt. The resolution will be sent to the University Affairs Committee.

ASCSU also heard Lex 5103, “Ensuring Adherence to Section 207 Sub-section E of ASCSU Constitution and the Amendment of the Same,” which would ensure that senate bylaws are “tabled and approved in a timely manner,” according to the document.

Next, ASCSU heard Lex 5104, “Adding Specific Diversity and Inclusion Trainings to the ASCSU Constitution,” which aims to add Safe Zone, a free educational workshop facilitated by the Pride Resource Center, training to section 106(d) of the ASCSU constitution. This lex will be sent to the Internal Affairs Committee.

Charlie Williamson, senator for the Pride Resource Center and author of the lex, said the lex would make sure “people have the education and vocabulary to accurately represent all students at CSU.”

Freeman also delivered the court’s opinion on Case 5103. Gemma Buhaenko, elections manager, had requested an opinion on the votes of confidence for the 2022 elections. According to Freeman, the supreme court decided that absentments should not be counted in the total number of votes and that if absentments were counted, there must be a revote.

Finally, the court voted if a candidate doesn’t receive a vote of confidence, they will be ineligible to run and removed from the ballot. Freeman clarified this decision will only be applied in the future and will not change anything from the past election.

ASCSU then moved on to old business and heard Bill 5117, “Supporting the Growing Food Security Project,” which allocates $30,000 over three years to the Growing Food Security Project,” and Bill 5112, “Continuing Support for Rams Against Hunger Food Pantries,” which also allocates $30,000 over three years to maintain the Rams Against Hunger pocket pantries. Both bills passed.

The last bill ASCSU heard was Bill 5113, “Green and Gold Book Reboot,” which will fund the recreation of ASCSU’s introductory Green and Gold book. The bill passed.