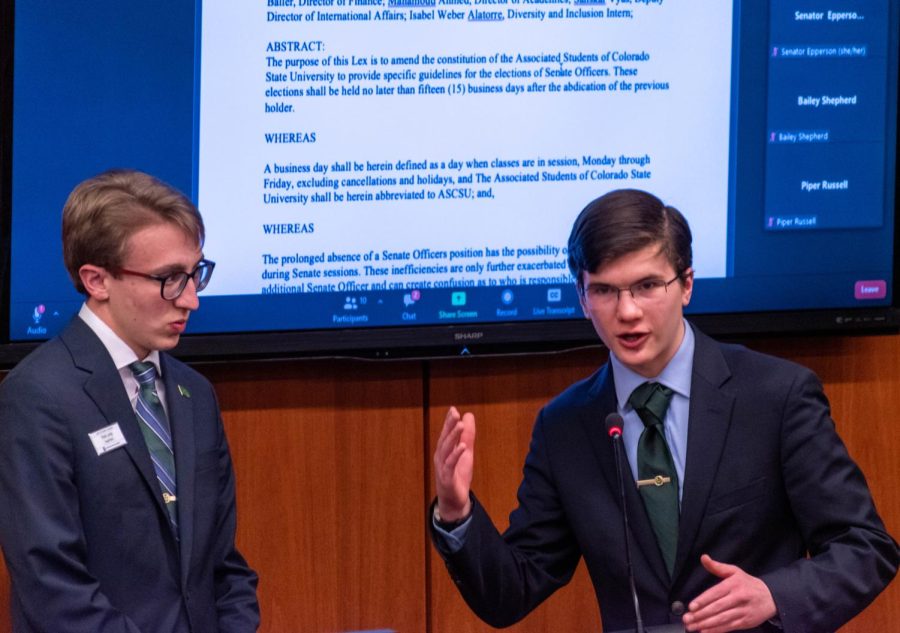 Rob Long, senator for the College of Business, and Stephen Laffey, former senator for the college of Liberal Arts, present a bill to the Associated Students of Colorado State University March 9. The bill was to hold elections to fill open positions within 15 days of the position becoming vacant.

The Associated Students of Colorado State University met March 9 for their 21st session. ASCSU heard new legislation, a guest presentation, updates on their upcoming elections and swore in an associate senator.

Mariana Sanchez was sworn in as a new associate senator.

Jen Johnson presented the Keith M. Miser Scholarship to Mia Ritter, Diversity & Inclusion Caucus chair and senator for the Native American Cultural Center. According to Johnson, the scholarship is awarded to a current member of ASCSU, and the student must show “a commitment to service, leadership and academic excellence.”

“The selection committee was impressed with a lot of things about (Ritter),” Johnson said. “They were really impressed by her commitment to advocacy and being a voice for people that she represents in student government at CSU, and they were also really impressed by her support for ASCSU senate legislation that supported students through the pandemic.”

Aly Belknap, senior organizing manager at New Era Colorado, gave a presentation on transcript withholding. According to Belknap, New Era Colorado is a nonpartisan organization that works “to engage and mobilize young folks on the issues that really matter to them and also to register and engage young voters.”

“Basically this bill would change students’ lives by giving them access to the transcripts and diplomas that they earned,” Belknap said.

Gemma Buhaenko, who officially stepped into office as interim elections manager on Monday, reported on the upcoming ASCSU elections. According to Buhaenko, the deadline for president, vice president and speaker of the senate applications will be extended to March 14. Senator applications will now be due March 18. The campaign timeline, including president, vice president and speaker debates, will remain the same, beginning March 21 and ending April 1.

ASCSU moved on to legislation, beginning with Lex 5102, “Constitutional Amendment in the Absence of a Senate Officer.” The lex aims to amend the ASCSU constitution to include guidelines on elections of senate officers, and it states the elections should “be held no later than 15 business days after” the position opens.

According to Rob Long, co-author of the lex and a senator for the College of Business, they felt it was needed after the amount of time it took to elect a new speaker pro tempore after Emery Jenkins resigned.

“The idea is simply to ensure that we do have a full and functional senate leadership at all times,” said Stephen Laffey, co-author of the lex and a former senator for the College of Liberal Arts.

The lex will be sent to the Internal Affairs Committee.

ASCSU then heard Bill 5114, “Reallocation and Sunset Clause for Bill 5023.” This bill seeks to write a sunset clause for Bill 5023, “Approval of BSOF Funding for Rams Against Hunger,” that will allow Rams Against Hunger to use the remaining $36,000 allocated by the Board for Student Organization Funding. It states this funding can be used until May 30, 2023. The bill will be sent to the Budgetary Affairs Committee.

ASCSU also heard Bill 5115, “Funding for Lyft (RamRide Secure) codes for CSUHN,” which seeks $5,500 from the ASCSU Discretionary Fund to provide Lyft codes to the CSU Health Network. The bill aims to help provide students access to health care and advertisement of health care on campus.

The Lyft pilot program would be initiated in the spring semester of 2022 and subsidize up to $12 per ride. According to Rithik Correa, author of the bill and a senator for the Office of International Programs, this program could provide rides for 400-550 students. The bill will be sent to the Budgetary Affairs Committee.

Next, ASCSU heard Bill 5116, “Rams Destress Event.” This bill aims to create an event called “Rams Destress” and allocate about $6,000 from ASCSU to fund the event, which would take place in The CSU Plaza from May 2-5. According to the bill, the event would help to raise awareness about issues of high stress and mental health and help students decompress before finals week.

According to Elijah Sandoval, co-author of the bill and a senator for the First Generation Student Collective Board, the event will include calm strips, therapy dogs, massage therapists, music and more.

“I hope to be able to do this every semester during what is now going to be known as revive week,” Sandoval said.

This bill will be sent to the Internal Affairs, University Affairs and Budgetary Affairs committees.

The last piece of legislation ASCSU heard for the night was Lex 5101, “Remedying a Mistype,” which fixes a mistype made by the 50th senate in an alteration of the constitution. The lex passed.