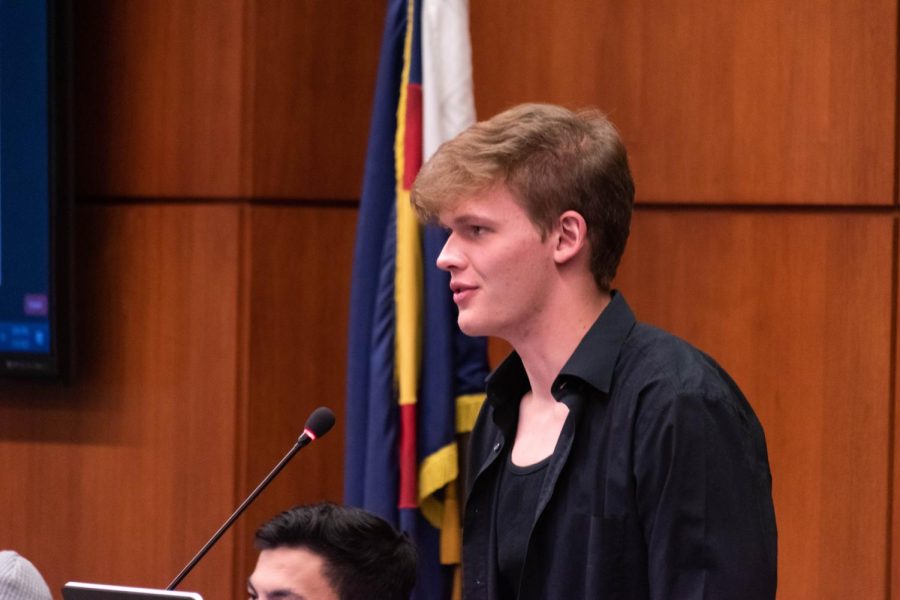 Speaker of the Senate Jackson Hunter shares with the Associated Students of Colorado State University senate that he has more availability to assist with the work they are doing during a meeting March 9.

The Associated Students of Colorado State University met March 23 for their 22nd session. ASCSU swore in two new senators and one associate senator and heard a piece of legislation.

ASCSU also ratified the Elections Committee for upcoming elections, elected a new chair for the Budgetary Affairs Committee and held confidence votes for the candidates for speaker of the senate.

Several committee candidates spoke on their reasons for wanting to be involved in the elections process, with an emphasis on maintaining fair elections and contributing to the CSU student body in a meaningful way.

The entire Elections Committee was ratified.

“I believe that the chair of Budgetary Affairs needs to be an extremely strong and organized leader who can respond in a timely and effective manner, especially now,” Silverhart said in a video played at the meeting. “Especially with it being that second half of the spring semester, and us having so much money we can spend. And I believe I am the best person for this position because of the direct experience I’ve had with ASCSU and the indirect experience I’ve had around campus and the community.”

ASCSU moved on to confidence votes for speaker of the senate candidates. Candidates included Evan Welch, Nicholas DeSalvo and Rithik Correa. All candidates gave presentations followed by a Q&A period.

Welch, a senator for the College of Liberal Arts and chair of the University Affairs Committee, spoke about his experience in ASCSU and how he will use rules of order to run senate meetings.

DeSalvo, a political science major, spoke about his qualifications. DeSalvo ran in a local election at 17 years old and served as student body president of his high school.

Correa is a senator for the Office of International Programs. Correa spoke about his goals to spread knowledge about ASCSU to the student body, including making sure students know what ASCSU does.

After the presentations, the senate engaged in a discussion and debate about the candidates. Some senators expressed concern over Correa’s past actions in the senate.

“I do not believe that (Correa) has the ability to ensure this space is safe and welcome,” said Ariadne Athey, the Internal Affairs Committee chair.

Ben Torres-Doxey, recruitment and retention officer, as well as multiple senators also spoke about the importance of thinking about each candidate’s ability to be speaker of the senate.

“We’ve seen how poorly discussions can be facilitated in the past, so I think just thinking critically about how well each candidate will be able to facilitate healthy and positive discussions within ASCSU (is important) to prevent any harmful incidents from happening,” Torres-Doxey said.

Correa did not receive the confidence vote, while Welch and DeSalvo did.