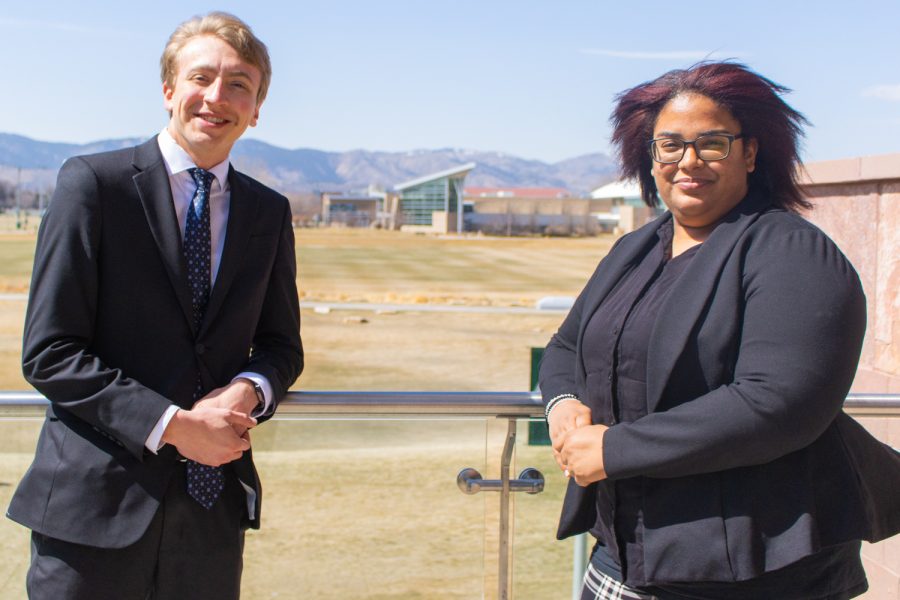 Presidential and vice presidential candidates Robert Long and Elijah Sandoval said they are running on a platform of transparency and letting their actions speak louder than their words March 25.

Robert Long and Elijah Sandoval are running uncontested for the Associated Students of Colorado State University president and vice president. Their campaign slogan is “action is a commitment, not a word.”

Long, the presidential candidate, is a junior business administration major concentrating in accounting and finance and a senator for the CSU College of Business. Sandoval is double-majoring in social work and sociology with a concentration in criminal justice. She is a senator for the First Generation Student Collective Board within ASCSU and is also a first-generation student, transfer and adult learner.

Long and Sandoval’s campaign platforms are transparency, financial responsibility, mental wellness and community. The two feel like their unique backgrounds and experiences as well as their time within ASCSU have prepared them to accomplish their goals that fall in these platforms.
Transparency
Long and Sandoval want there to be more transparency about what goes on in the senate and for students to know they are welcome in the space.

“You know, during our senate sessions, we have gallery input where we invite every single student within Colorado State University to come in, share their thoughts, share what they think could be better on campus, share what they think could be changed on campus,” Sandoval said. “But I don’t think they know that, and if they do, maybe they’re afraid.”

Regarding transparency and visibility of their campaign, the two noted their campaign is primarily on their social media, @longsandoval4office on Instagram, and their direct messages are always open for students to reach out.

“Unfortunately, because of our crazy schedules, we haven’t been out there (on The Plaza) as much as we would like to be, and (during) the first two days of campaigning, the wind was awful,” Sandoval said. “It was snowing and it was freezing cold, so we weren’t able to be out there. But we are out there as much as we can now that the weather is a little bit nicer.”

Long and Sandoval have also been reaching out to professors to talk to classes as well as reaching out to heads of departments, fraternities and sororities. They are also passing out flyers with more information about their campaign.

Long hopes they will be able to be more transparent about student fees by putting more information about how fees are being spent on the ASCSU website as well as hopefully sending out emails with that information.

“I mean, I get that … students’ email inboxes are … full to the brim sometimes, but we feel like as long as it’s out there and as long that we expose it, we are being transparent,” Long said.

Long mentioned the previous speaker of the senate sent senate leadership into deficit due to a miscommunication about the price of an event and that he, alongside other CSU College of Business senators, helped the senate find ways out of that situation. If elected, Long wants to be more financially responsible and believes the large amount of money in his hands will be handled properly.

“It’s not just this year,” Long said. “There’s been past examples of financial irresponsibility. So we believe that it’s important that … student funding and student dollars are being held in responsible hands.”
Mental wellness
Regarding their platform of mental wellness, Sandoval holds a passion for it individually and within the school. Sandoval wants to work with campus resources like the CSU Health Network, Student Disability Center and the Women and Gender Advocacy Center to make sure student fees are going to them and they are well funded and staffed.

Sandoval emphasized that it is important they are well staffed so students aren’t having to wait weeks or months to see someone or get the help they need.

“We want to make sure that those accommodations are met within a timely fashion,” Sandoval said.
Community
Long and Sandoval’s campaign is also deeply rooted in maintaining a good community at CSU for both in-person and online students.

“We have our ‘Ramily,’ if you will, and that indicates that CSU is a family; … it’s a big community,” Sandoval said. “But we have students, like our CSU Online students, who are still paying for these fees out of their tuition, but they’re online, so that sense of community is missing. We want to bridge the gap between the online students and the in-person students.”

The two also believe it is important to keep CSU traditions and let students drive the community. They gave the CSU Undie Run as an example of students creating a community they want to stand by.

“If students want to run half-naked around campus, who are we to judge them, and who are we to tell them no?” Sandoval said. “But we will be in a position where we can make that event safer and make sure that students know their rights and know where they can go if something were to occur.”
Goals
Because community is so important to them, Long and Sandoval want to make sure the campus is a supportive and safe one, mentioning a big plan to help with some of the student complaints about the preachers on The Plaza that consistently come every year.

The two want to work alongside Mike Ellis, the assistant vice president for student affairs and executive director of the Lory Student Center, and with the CSU administration to implement a three-strike policy for preachers on The Plaza.

They want specific rules set out on The Plaza that state anyone speaking is not allowed to target any student on campus, call or single out students out of the crowd or provoke a student to interact with them physically.

Breaking these rules would result in a strike. The goal is that, after a third strike, police would get involved.

“Now, we can’t silence free speech, unfortunately, because that’s part of the First Amendment, and being a public college, we have to abide by that,” Sandoval said. “However, we can silence hate speech because there’s a difference between free speech and hate speech. And I think those lines with these preachers are getting very much blurred between what is free and what is hate.”

One noticeable difference in their goals compared to previous years of elections is a fight against U+2 is not a central platform.

The two say they want to continue the work of Benton Roesler, the current director of housing security, who they say has gathered a lot of information that will help them continue the fight.

Even with their excitement about their platforms, their campaign and their plans, the two are a little disappointed the election is uncontested this year.

“We’ve talked about it a lot because we found out … we were running unopposed, and I texted Elijah — I was like … ‘I’m a little, like, disappointed,’ you know, ‘because I think I would have been more motivated,’” Long said. “(I’m) not saying like I’m not motivated right now, but I feel like if there was someone else right there standing next to us on The Plaza … there’d be a little more to fight for, you know?”

However, Long does say it gives them a unique opportunity to really focus on representing the students and making sure they are putting the best plans in place rather than worrying about a competitor.