State of the City Address discusses lessons from the pandemic 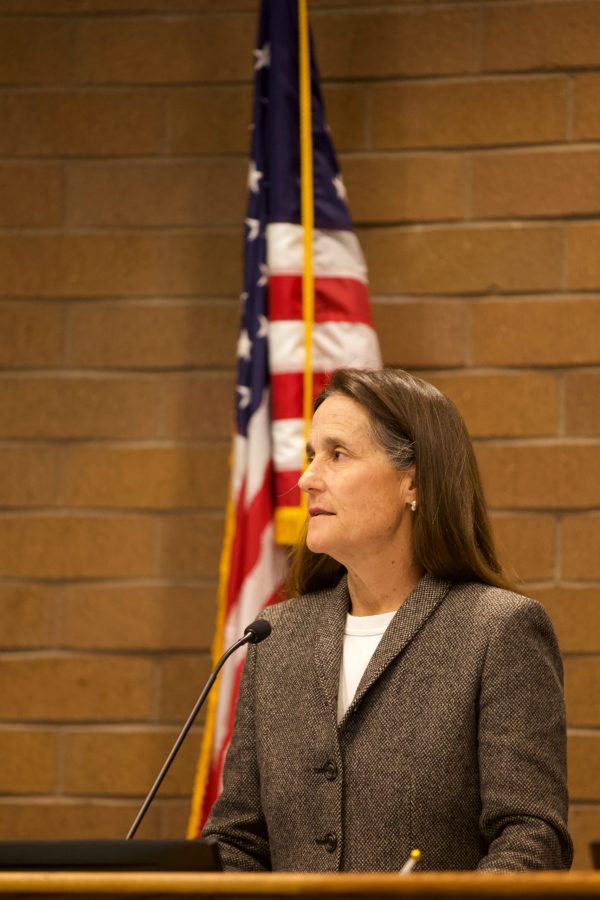 Fort Collins Mayor Jeni Arndt during a City Council session Sept. 21, 2021. The City Council heard from community members and moved forward with a variety of ordinances impacting Poudre School District, local marijuana codes, infrastructure and other aspects of the city.

At the annual State of the City Address, Interim City Manager for the City of Fort Collins Kelly DiMartino and Mayor Jeni Arndt discussed the impact of the pandemic on individuals and local businesses, along with the future plans for the Hughes Stadium land.

At the beginning of the address, the City showed footage of interviews with several local business owners who shared their experiences through the pandemic.

One of the local businesses was R Bar and Lounge, which is the only LBGTQ+ bar in Fort Collins, according to owner Leanna Valadez. Valadez said there have been hard times during the pandemic that led to financial difficulties.

“Then, almost as if on cue, someone will come up and throw their arms around me and cry on my shoulder,” Valadez said. “(They will) tell me that this space means everything to them and that they feel like they can be who they really are.”

Also mentioned during the State of the City Address were plans for the former Hughes Stadium land.
“Part of what we’ll be doing in that (Hughes land) conversation is really working closely with our Indigenous community and hearing some of their goals and desires for that land.” -Kelly DiMartino, Interim City Manager for the City of Fort Collins
The City will be purchasing the Hughes land from Colorado State University later this year, and DiMartino said there are plans to launch a large community engagement process for the property to decide the design and function of the land.

“Part of what we’ll be doing in that conversation is really working closely with our Indigenous community and hearing some of their goals and desires for that land as well,” DiMartino said.

Alongside causing local businesses to struggle, Arndt believes the pandemic has highlighted weaknesses and strengths in Fort Collins.

“Before, where there may have been a concern, there’s a crisis,” Arndt said. “So the pandemic has highlighted some of our weaknesses, which has had impacts on our City.”

Arndt said she doesn’t know the full impacts of the pandemic on the City but as time progresses, the community will have a better perspective on how the City was affected. Arndt also said the pandemic has made people more likely to ask for help in times of need.

“We have a renewed emphasis and appreciation of mental health being a full partner with physical health,” Arndt said.

DiMartino added that the pandemic has helped the City, in some cases, get laser-focused on what’s really important and most needed. She noted that a majority of the coronavirus relief bill funding the City received went directly to the community, including local businesses, nonprofits and social needs.

DiMartino mentioned there was a transition in elected leadership and many City staff positions, including an increase in the number of female City Council members. She also said the City welcomed individuals from various backgrounds, including several who are new to local government.

“So it really is providing just a great mix of perspectives,” DiMartino said.

The full State of the City Address video can be found on the City of Fort Collins’ YouTube channel.