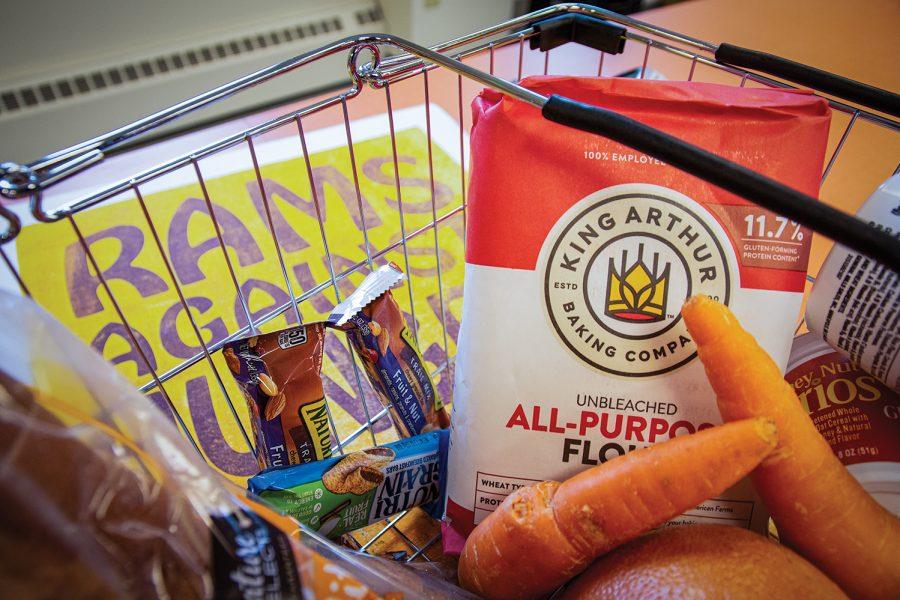 Groceries fill a basket at the Rams Against Hunger Food Pantry Jan. 26. Produce, baking goods and feminine products are some of the items available here, which are from the Food Bank for Larimer County.

Editor’s Note: Read the Spanish version of this article here.

The Rams Against Hunger program and RAH Pantry raised over $500,000 in 2021 to provide basic needs for students, staff and faculty, said Brittany Habben, assistant director of development for Student Affairs.

In the 2018-19 academic year, a survey given to CSU students showed that 32% of students faced some level of food insecurity, according to the Lory Student Center website.

“This is students who are having to forgo a meal in order to pay their bills,” said Michael Buttram, basic needs program manager.

In 2020, with the COVID-19 pandemic ramping up, RAH was able to adjust and have a food pantry open in the Lory Student Center.

Right as the pandemic hit, RAH did a mobile pantry, Buttram said.

The pandemic hit many people hard, and even with classes not running normally, there was still a need for food — if anything, the need went up, Habben said.

“Through that whole process, it was determined we need a permanent, on-campus food pantry to fill this gap and fulfill the needs of our community,” Habben said.

“It’s just kind of shocking to see how many people were coming to use that mobile pantry once a month, and it started becoming very clear that this needed to be a consistent thing,” Habben said.

“At CSU, we adhere to our principle(s) of community, of which … social justice (and) inclusion are at the top of the list,” Buttram said. “So to do anything less than provide basic needs support is to directly contradict our own stated principles.”
“I would like to stress that it is a true community effort and that it’s not just alumni and donors. … It is funded through faculty and staff — even students themselves.” -Brittany Habben, assistant director of development for Student Affairs
The pantry is open four days per week and is able to function because of the many donors and organizations that helped fund this project.

The donor list includes the University Facility Fee Advisory Board, which provided the RAH with a grant of approximately $300,000, Buttram said.

The Associated Students of Colorado State University also contributed by writing a bill that provided RAH with $61,000, Buttram said.

“I would like to stress that it is a true community effort and that it’s not just alumni and donors,” Habben said. “It is funded through faculty and staff — even students themselves.”

Giving Tuesday is participated in at CSU through donations to Rams Against Hunger, to which people can donate to help others who are dealing with food insecurity. One way the CSU community donates is through meal swipes.

“In November, there (were) over 1,300 meals donated back from fellow Rams,” Habben said. “Students are giving back in a way that works for them. … We appreciate everyone coming together to fight hunger on campus.”

The pantry will be open Mondays, Wednesdays and Thursdays from 3-6 p.m. and Tuesdays from 9 a.m. to noon. The pantry is located at 1251 S. Mason St. in the CSU General Services Building.

There are nine students who work at the pantry to serve and meet the needs of guests by providing a non-judgmental environment, Buttram said.

“Our student staff are individuals who really understand the mission of what we’re doing in that we are strengthening our community through greater food security for all,” Buttram said.

Buttram mentioned the scarcity mindset model, which is the idea that “someone else needs it more than me.”

“We have more than enough,” Buttram said. “We have ample food in there, so everybody should feel welcomed.”