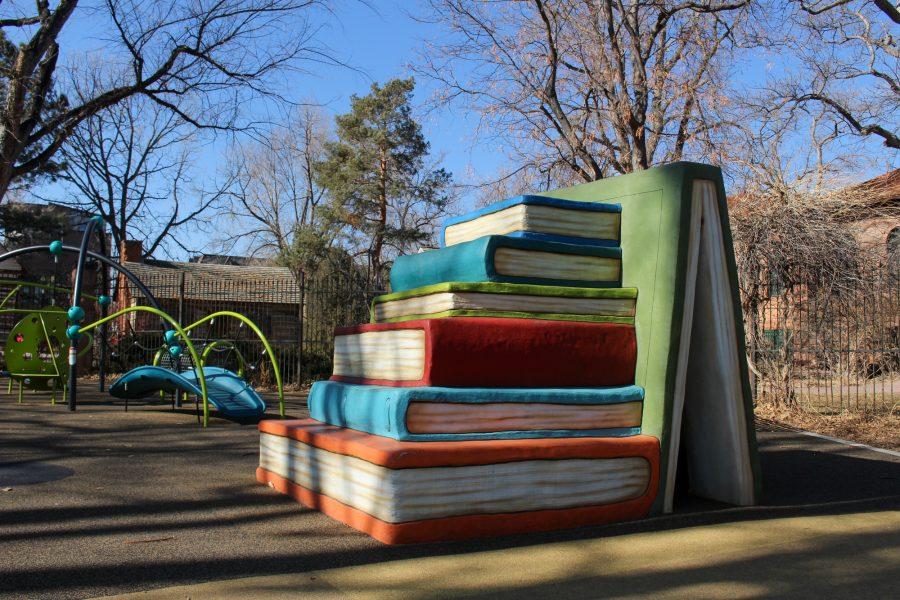 A sculpture in Library Park sits near the Old Town Library Feb. 8, 2021.

The Poudre River Public Library District appointed a new executive director who is excited to engage with the Fort Collins library community.

Diane Lapierre, who previously served as the director of the Loveland Public Library, was appointed to lead the district, which contains three libraries: Old Town Library, Harmony Library and Council Tree Library.

“I am excited to explore a larger system, a larger community and a library district,” Lapierre said. “There are exciting new challenges for me.”

Lapierre said libraries have always been a large part of her life. She grew up spending time in the Loveland Public Library, volunteering at her school libraries and eventually maintaining a work-study job at a library in college.

“That opportunity for kids to learn to read can open the doors for them to become whoever they want,” Lapierre said. “That’s what motivated me.”

Lapierre said understanding, recognizing and reacting to community desires is the obligation of a library. She said she does not yet know what the particular needs of Fort Collins are, but she looks forward to researching and learning from residents.

“One of the things I am looking forward to is having conversations in the community, learning from people who live here and making sure I hear from all sorts of different voices,” Lapierre said.

She said that likely around the second half of the year, the community will be invited for discussions regarding library aspirations and a common vision.
“I think it is who we are in nature to want to tell stories and hear stories. … The library’s role is not to be a warehouse, it’s to bring those things to life and put them in the hands of people.” -Diane Lapierre, Poudre River Public Library District executive director
Lapierre also added that this role attracted her because it is a rapidly growing community that calls for facilities, expansions and planning. She said her goals include increasing access to technology and maintaining an open and welcoming space.

One of the challenges libraries currently face is navigating the COVID-19 pandemic. Lapierre said libraries had to shut down public spaces during the beginning of the pandemic.

“Public libraries are one of the few places you can go without a membership or paying for a product,” Lapierre said. “When our doors closed, it meant those resources we were used to providing were not available to the community.”

Despite the complications, libraries quickly adapted to a more virtual approach. Lapierre said downloadable content has become increasingly popular at the Loveland Library amid the pandemic. The Poudre River district libraries have e-books, audiobooks, music and movies available to download online.

Lapierre also said staff members were trained to deliver materials curbside in order to get physical resources into the hands of residents.

“We had to figure out the best way, given current conditions, to meet the needs of the community,” Lapierre said. “Those needs did not go away for those who needed access to technology and services. That’s been the hardest part of this to navigate — to do that in a way that keeps us safe and healthy. I keep saying, ‘We aren’t getting over this; we are getting through this.’”

Programs and coordinated activities also changed throughout the pandemic. Lapierre said many of the children’s activities moved to a virtual format, although things have changed based on current conditions. She also said that around the time of her first day, it was decided to limit in-person activities due to safety concerns, but alternative options are offered.

“An atmosphere I want to create feeds people’s curiosity and supports their individual growth,” Lapierre said.

She also said her goals include a future-focused approach that includes strong collaborations and partnerships. As for the future of libraries, Lapierre said they aren’t going anywhere.

“I think it is who we are in nature to want to tell stories and hear stories,” Lapierre said. “The more we are open to that, the more we are human. We understand those connections and commonalities. The library’s role is not to be a warehouse, it’s to bring those things to life and put them in the hands of people.”