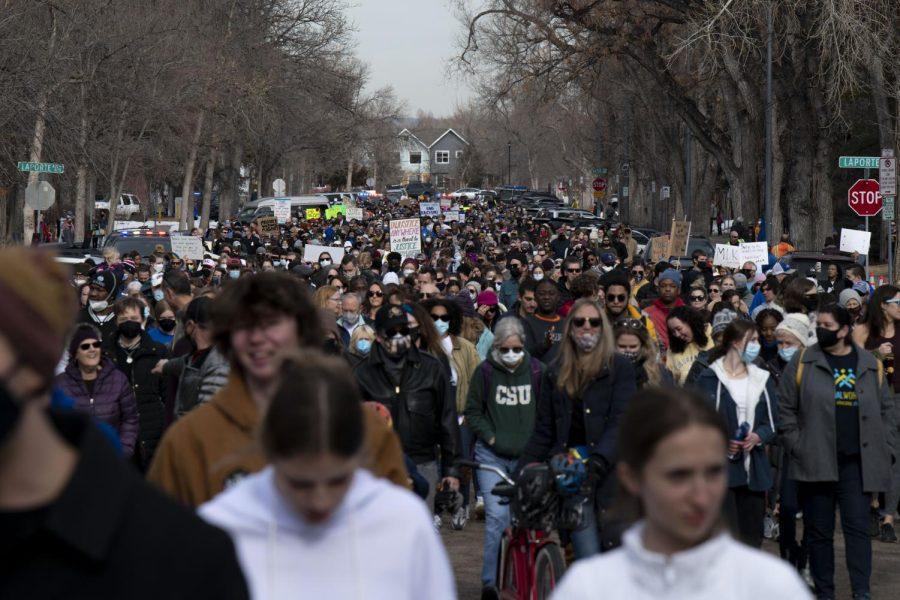 The City of Fort Collins and Colorado State University came together Monday to celebrate the federal holiday of Martin Luther King Jr. Day with a march and special programming at the Lory Student Center focusing on racial equity.

The march, which in past years followed a route from Old Town Square to the LSC, broke tradition this year with a route starting in Washington Park in north Fort Collins. The route, which passed along Cherry Street and Meldrum Street, was chosen as a way to commemorate the history of some of Fort Collins’ earliest Black residents from the early 1900s, according to the LSC’s MLK Day website.

According to Fort Collins’ historic preservation website, in 1900, only 16 Black residents were listed in the census, although the website adds that number is “artificially low,” as many residents were not recorded in the census for various reasons.
“After all these years, we are still marching, and we are still fighting for justice and equity. I think (King) would be disappointed as I am disappointed and as we all should be disappointed.” -Blanche Hughes, vice president for student affairs
Among these families were the Lyles, located on Meldrum Street, who made civil rights history in Northern Colorado when Mattie Lyle successfully sued the then-State Theater for discrimination in 1939, according to the website. Another notable Black family featured on the route was the home of the McDaniels at 317 Cherry St., whose daughter, Hattie McDaniel, went on to play Mammy in the 1939 film “Gone With The Wind” and became “the first Black American to win an Academy Award” for her role.

But while the route changed to commemorate the past, speakers at the following programming turned to the future of MLK’s legacy with special importance placed on renewed voting rights efforts. Fort Collins Mayor Jeni Arndt gave opening remarks at the programming and spoke on the value of “marching ahead” with an excerpt from King’s famous speech.

“This is fragile; it’s happened within my lifetime and many people’s lifetimes here,” Arndt said. “We have to do it right (and be) intentional, deliberate and vigilant about protecting our voting rights — our equality — and we need to make sure that in this beautiful community that we all share, every single person counts and counts the same.”

Vice President f0r Student Affairs Blanche Hughes also took the stage at the programming briefly to talk about the continued fight for voting rights and persisting even when the path to equity has been obstructed.

Hughes also said MLK Day should be taken to reflect on the past and to “recommit to transforming our society.”

“I know that many of us are tired, and we are weary,” Hughes said. “But you know what? Dr. King was always tired and often weary, and he never gave up — and neither can we.”