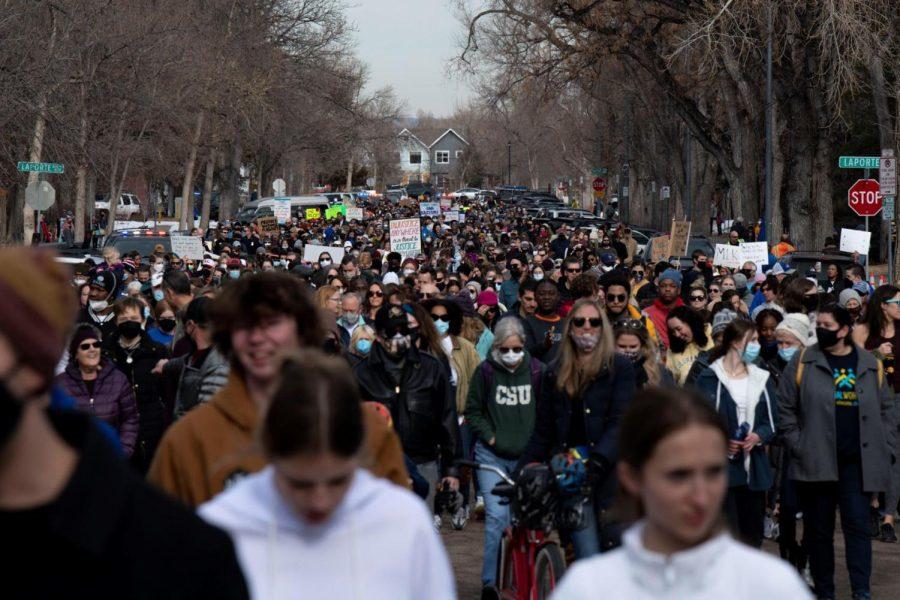 Editor’s Note: Michael Giles is a sports reporter and photographer for The Collegian.

This year’s theme, “The March is Far From Over,” motivated march leader and Poudre School District employee Delhia Mahaney to get involved.

“We still have voter suppression laws going on, and although we’ve come a long way since Dr. King was alive, we’re still not where we need to be as a nation,” Mahaney said.

Andrew Brown, a third-year journalism student at CSU and an employee for the Black/African American Cultural Center, came out to represent B/AACC and support the holiday as a “day of action rather than a day of rest,” Brown said.

“(This) is a holiday; we have school off, but that doesn’t mean that we should all just be hanging out and just chilling in our rooms,” Brown said. “No, we should be out marching and … showing our activism and solidarity.”

“(The historic preservation department) put in a request to the city manager’s office from my office and asked for that funding,” Bzdek said. “The city manager has discretionary funds to use to support community events, and so they chose to support it. They also are providing funding for Juneteenth.”

“We’re looking forward to making the event even bigger and better as we move forward and we move away from some of the limitations we’ve had with COVID(-19),” Bzdek said.

After speakers Dorsey, Kingsley, Arndt and Vice President for Student Affairs Blanche Hughes gave their opening remarks, senior journalism and media communication student Michael Giles read aloud a poem alongside a video showing pictures and visual aids. The B/AACC office hosts a spoken word contest each year, and the winner gets to speak at the MLK celebration event.
“The truth is I never set out to do anything heroic when I signed my name on that sheet of paper, agreeing to (become) one of the first Black students to attend (Little Rock Central High School), which was my neighborhood school.” -Carlotta Walls LaNier
Giles shared her poem, “A Series of Silenced Screams,” which highlighted several instances of violence toward Black Americans since 1955.

“It was honestly inspiring to be on the same stage as (LaNier), to be able to go on the stage before her — but knowing that she was going to be speaking during that event was very powerful to me,” Giles said. “It was inspiring to be able to have that opportunity to know that my voice matters just as much and we’re all pushing the same movement.”

LaNier shared the trials and tribulations of her time in high school, memories of meeting Martin Luther King Jr. and her thoughts on what it takes to stand up for justice.

She recalled celebrating the 50th anniversary of the integration into Little Rock Central High School and how that day in 2007 brought her right back to the moment she began at that school.

“The memories came flooding back of the soldiers, the mobs and the white kids who spent their entire days trying to make mine a living hell,” LaNier said. “The truth is I never set out to do anything heroic when I signed my name on that sheet of paper, agreeing to (become) one of the first Black students to attend (Little Rock Central High School), which was my neighborhood school.”

LaNier also spoke of her memories meeting King and said the most standout memories were the ones of King acting just like any other person.

“When I met Dr. King, … he was just a preacher on a mission,” LaNier recalled. “My most enduring memory of Martin Luther King Jr. is him sitting around a card table in the basement eating barbecue ribs and drinking beer. Now, some people cringe when I say that. Perhaps they think it diminishes him in some way or makes him too, well, ordinary. I think we sometimes want our heroes to seem superhuman.”

LaNier spoke about how King wasn’t superhuman; he was just a man who put his talents to work, and each and every person with a gift or a talent has the same ability to use it for good.

LaNier concluded the event with remarks about standing up for justice.

“In the spirit and in the memory of Dr. King, what I am trying to share with you today is that stepping up does not require a giant step, just a courageous one,” LaNier said.