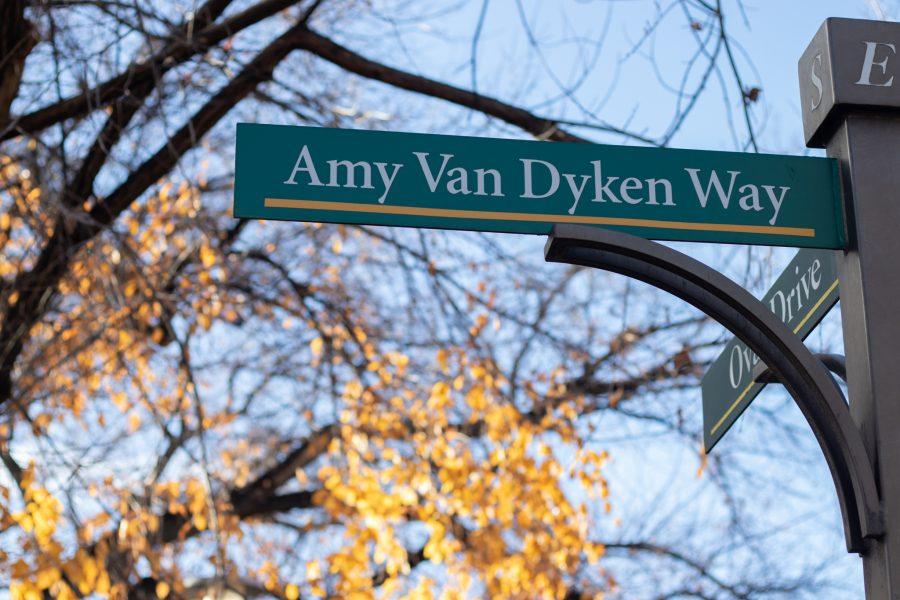 At times, history can feel far away. As Colorado State University students walk from class to class, they see shiny new glass buildings and empty lots ready for construction — ultimately, a very different campus exists now than what was once here.

History, however, is still present all around. One connection between the current CSU and the past is the naming of different streets and buildings on campus.

Pitkin Street, which runs east to west from South Shields Street to Riverside Avenue and goes directly through the CSU campus, is named for Frederick W. Pitkin, a Colorado governor in the late 1800s. According to Colorado’s State Archives, Pitkin served as governor from 1879-83 and was a lawyer and mining investor prior.

The Fort Collins street likely got its name between the late 19th century and early 20th century, as a timeline of the 1900s from Fort Collins History Connection discusses transportation and quotes a book written by Ansel Watrous in 1911 that describes where a new railroad will go in the city.

One of Pitkin’s main agendas as governor, according to multiple historical accounts, was to push the Ute tribe out of Colorado and take the land for white settlers. During his time in office, Pitkin repeatedly stated that he wanted the land of the White River Ute settlement.

After a revolt by the Ute people against Nathan C. Meeker, who was attempting to “make the White River Ute settlement into a Christian farming commune,” according to the state archives, the federal government forcibly moved most of the Ute people to reservations in Utah.

“Pitkin promptly offered the government all the troops it might need and was answered that the government could take care of itself without Colorado’s help,” reads an article in The Colorado Miner from Oct. 4, 1879 in reference to removal of the Ute people.

In May, the Associated Students of CSU passed a resolution asking the University to rename the street because of Pitkin’s oppression of the Ute people.

“By retaining the name ‘Pitkin Street,’ CSU draws forth and is complicit in historic and contemporary oppression of the Ute peoples and Nations to whom CSU has a responsibility to in our Land Acknowledgment,” the resolution said.

In renaming the street, the resolution said CSU would “have the opportunity to remove any negative association to help the healing and awakening for all students who learn at this University.”

Edwards Hall, a dorm on the southwest side of CSU’s campus, gets its name from Elijah Edwards, the first president of what was then called Colorado Agricultural College.

Originally from the Midwest, Edwards was a teacher and a minister for most of his life. He served as president for three years and “conducted morning chapel services, oversaw the handful of faculty members and reported to the school’s governing body,” according to the CSU Library Archives’ biography on Edwards.

In addition to housing students, Edwards Hall is home to the CSU Bakeshop, which provides cookies, cakes, gluten-free desserts, sandwiches, salads and other snacks to the CSU dining halls. Although Edwards was not at CSU for long, his history exists every time a student eats a dining hall cookie or buys a hoagie from an express dining hall on campus.

Amy Van Dyken Way, a small street that runs north to south from Oval Drive to University Avenue, has a more recent history than many of CSU’s older buildings and roadways. The street takes its name from a CSU alumni and athlete, who now goes by the name of Amy Van Dyken-Rouen.

A swimmer, Van Dyken-Rouen graduated from CSU in 1994 and was named to the CSU Athletics Hall of Fame in 1996, and the street, formerly known as West Drive, was renamed after her in 2014, according to a news story from CSU Athletics. She received the NCAA’s Swimmer of the Year award in 1994 as a senior at CSU.

Van Dyken-Rouen went on from CSU to win six Olympic gold medals — four at the 1996 Atlanta Olympics and two at the 2000 Sydney Olympics, according to the United States Olympic & Paralympic Museum.

Van Dyken-Rouen was the first American woman to win four gold medals in a single Olympic games, according to the U.S. Olympic & Paralympic Museum.

Just about every CSU building, campus street or outdoor space holds a piece of CSU history behind it that gives students the ability to reflect on the past while heading toward their future.