Land Back: Land restitution efforts across the country 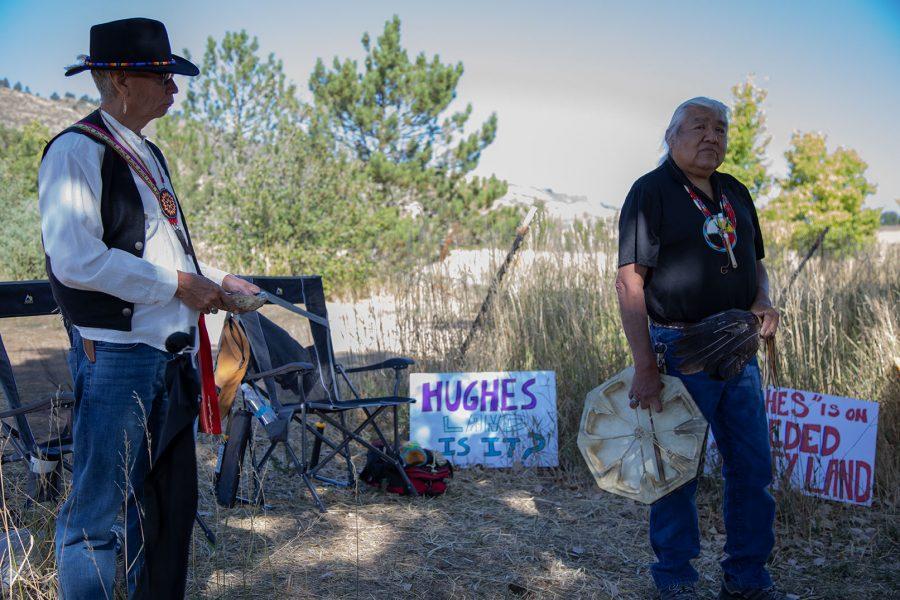 David Young and Kenny Frost address the crowd gathered around two Cottonwood trees west of Aggie Greens Disc Golf Course at a press conference held by the Hughes Land Bank initiative in Fort Collins Sept. 18. At the press conference, organized after the dismantling of a sweat lodge constructed in the same place, Indigenous people shared history of the area and spoke on their wish to be able to access the land where Hughes Stadium formerly stood. (Serena Bettis | The Collegian)

With Native American Heritage Month here, talks about land restitution efforts have been renewed, including those in Fort Collins’ own backyard.

According to an article from the Haverford College Center for Peace and Global Citizenship, land restitution movements advocate to bring self-determination to Indigenous communities.

The website also states the Land Back movement “does not ask current residents to vacate their homes but maintains that Indigenous governance is possible, sustainable and preferred for public lands.”

In light of the recent events surrounding land back movements in Colorado, especially the fight to reclaim the site of Colorado State University’s Hughes Stadium for Indigenous communities, here are some recent and ongoing land return efforts across the United States.

According to an article by Cultural Survival, the Eureka, California, City Council began a land restitution effort with the Wiyot Tribe, a tribe in the Humboldt Bay. After being massacred by nearby settlers in 1860, the Wiyot people were barred from their land. In 2004, the city council returned 40 acres of Tuluwat Island to the tribe. The city then went on to return over 200 more acres to the tribe in 2019.

The Mashpee Wampanoag Tribe, located in Massachusetts, has been involved in lengthy land back movements that began coming to fruition in the early 2000s, according to the tribe’s website. The Mashpee Wampanoag received federal recognition as an Indigenous tribe in 2007 and gained authorization to acquire land and reestablish its reservation.

The Mashpee tribe, which filed a land claim in federal court in 1976, was granted approval for a Land in Trust application and began reacquiring tribal lands in 2015, according to the tribe’s website.

The Native Land Conservancy is a Native-run land conservation group founded in 2012 in Mashpee, Massachusetts, guided by a team of almost entirely Wampanoag members, according to the group’s website. In 2015, the Native Land Conservancy received their first land donation, a 1.4-acre parcel of land in Centerville, Massachusetts, donated by resident Norman Hayes, according to an article published by Cape Cod.

According to the Oklahoma Indian Missionary Conference, the U.S. government promised 148,000 acres of Kansas land to the Wyandotte tribe, but the land had been given away by the time the Wyandotte people arrived.

Nebraska farmers Art and Helen Tanderup returned ancestral land on the Ponca Trail of Tears to the Ponca Tribe in 2018, according to an article by Civil Eats.

The Ponca Tribe of Nebraska was forced to leave by the U.S. government along the Trail of Tears in 1879, according to the tribe’s website, but the tribe was recognized federally in 1990.