Why does Clark look like that? Exploring campus architecture 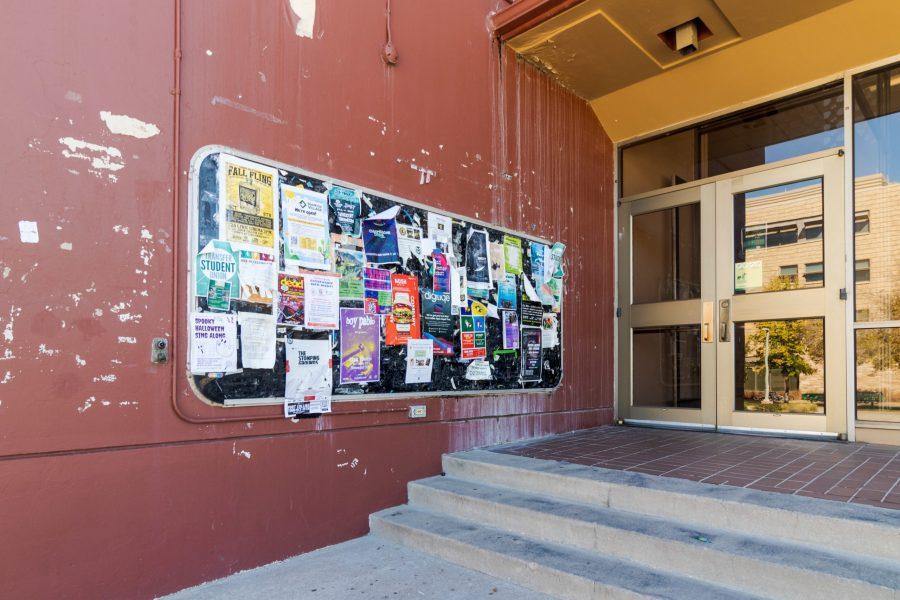 Paint peels near the events board on the Andrew G. Clark Building's A wing Oct. 15. Clark is often subject to criticism due to its poor state of repair. (Michael Marquardt | The Collegian)

The Andrew G. Clark Building, located near the center of the Colorado State University campus, is a well-known building in the CSU community due not only to the large amount of classes hosted within its walls but also its construction and architecture.

The building, which is likely familiar to many liberal arts students, is fairly divisive, with many who either love or hate the complex. One of the building’s most defining characteristics, for instance, is the honeycomb-like structure that encompasses much of it, known more technically as a brise soleil.

“(The brise soleil) was meant to sort of integrate long expanses of facades in various ways,” said Adam Thomas, assistant teaching professor in the history department. “Particularly, these new, firmest buildings tended to have broad facades of glass.”

The brise soleil may be aesthetically unpleasing to look at from the outside, but the structure is intended to create a better view for those inside the building.

“When people are viewing Clark Building from the outside, it makes the brise soleil sort of obstruct the view; it makes it opaque,” said Shaun Rose, a graduate student who did a presentation on the history of Clark in 2020. “People on the inside experience a more intimate setting.”

I’ve really learned to love this building, even in its horrendous state. Historically, we shouldn’t forget how important this building was to the University.” – Adam Thomas, assistant teaching professor of history

The presentation, “For the Love of Clark,” was a virtual exhibition presented by Thomas’ graduate students. The presentation goes in depth into the structure, lighting and many other overall features of the Clark Building.

Rose also said the structure was incorporated into the construction of the building because, at the time, it was an energy-efficient development that would help reduce the temperature inside the building. Brise soleil, which is French for “sun blocker,” is meant to deflect the sun’s rays away from the building.

Construction of Clark began in 1966 and was the largest development by CSU at the time, said Sean McCollum, another graduate student who took part in the presentation.

Originally, CSU was the Colorado Agricultural College from 1870-1935, then it became Colorado State College of Agriculture and Mechanic Arts from 1935-57.

“I’ve really learned to love this building, even in its horrendous state,” Thomas said. “Historically, we shouldn’t forget how important this building was to the University.”

Even the space outside the Clark Building was intended for community usage, and Rose said the plaza between Clark A and Clark C was once used as an outdoor theatrical space with the last recorded performance taking place in 2000.

“I’m actually probably more satisfied than most with Clark,” Thomas said. “(But for) students who have various kinds of accessibility issues, this building’s a nightmare.”

Thomas’ office, for instance, is located in the B-wing, which bridges from the Clark A structure across the outdoor space and into Clark C. But the B-wing itself is problematic because the space can only be reached via staircases, and individuals with limited mobility may not be able to access the bridge. Thomas also said maintenance in Clark has proven to be an issue.

“At any big institution, maintenance is difficult because you have limited budgets and limited personnel,” Thomas said. “(But) it is embarrassing, the state of this building and the way things leak and don’t get fixed.”