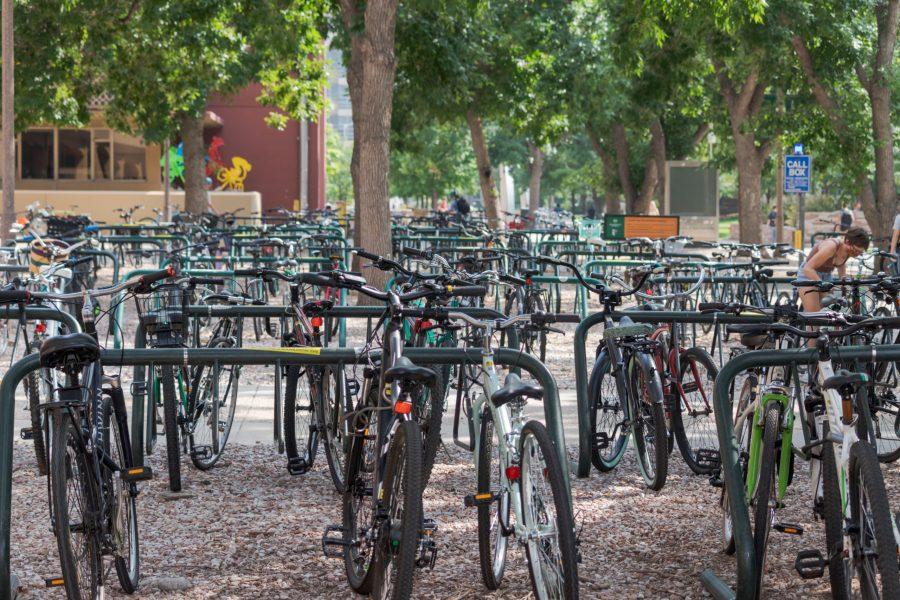 Bicycles sit chained in a bike rack outside the Clark building Aug. 30. (Michael Marquardt | The Collegian)

New students are probably learning to navigate campus as they go from building to building to make their classes, but students who have already spent a semester on campus may have noticed a small change: a new trail that has freed up transportation between the Plant Sciences and Animal Sciences buildings.

The project, dubbed the Monfort Quad Crossing Trail, is one of a series of new developments approved and funded by the Alternative Transportation Fee Advisory Board to make alternative transportation across and around campus more equitable, accessible and safe.

Mark Kohn, the chairperson of ATFAB and a junior at Colorado State University, said the fee advisory board collects a student fee for alternative transportation from full- and part-time students at CSU and then puts that money toward various projects.

We’re encouraging people to take alternative forms of transportation. If we’re going to do that, we need to make sure that it’s safe. If it’s not safe, then it’s not equitable; it’s not sustainable; it’s not right, morally.” -Mark Kohn, ATFAB chairperson.

One of the projects funded in the past by ATFAB includes The Spoke, a “campus cycling maintenance and educational training center” that helps teach CSU students how to maintain and repair their bikes as well as travel safely across campus. ATFAB is also responsible for the contract with Transfort that allows current students to use their CSU ID to ride any Fort Collins route and FLEX routes to Loveland, Longmont and Boulder.

Helen Flynn, a junior and vice chair of ATFAB, said that she and Kohn joined the board as a way to get some say in how their student fees are being spent and to ensure that they’re going toward projects that benefit students.

“If someone is on their college council and they feel like they want some control over where their fees are going for once, they can come and do that,” Flynn said. “We don’t get a lot of control as students about how much our fees are and where they’re going, so this is a great way to get involved.”

Anyone taking six or more credit hours at CSU pays a $33.65 student fee labeled the University Alternative Transportation Fee, which then goes toward the money ATFAB can award to various projects. A big factor as to why the Monfort Quad Trail separation was funded was the safety of students, according to Flynn.

“(CSU Facilities Management) came to us with a proposal just like every other group can,” Flynn said. “They gave us a presentation and said, ‘We’re badly in need of a trail here because right now, we have a single pedestrian walkway that’s supposed to support all forms of traffic through here.'”

Prior to the project being funded and completed, pedestrians and cyclists had to share a narrow sidewalk, which led to many pedestrians avoiding the area altogether because of the risk of getting hit, Kohn said. Kohn also said that the hazard of the original Monfort Quad Trail is a major reason he joined ATFAB, as he would have to cross the trail and avoid bikes on his way to class during his freshman year.

Flynn added that sustainability is a big component of ATFAB because alternative transportation usually means biking, bussing, carpooling and other means of transportation.

“We’re encouraging people to take alternative forms of transportation,” Kohn said. “If we’re going to do that, we need to make sure that it’s safe. If it’s not safe, then it’s not equitable; it’s not sustainable; it’s not right, morally.”

Kohn said ATFAB meetings are open to the public and held every other Monday in the Lory Student Center in room 376 from 5:30-6:30 p.m.

Students interested in getting involved with ATFAB or submitting a proposal can contact ATFAB directly or communicate through their college council, Flynn said.