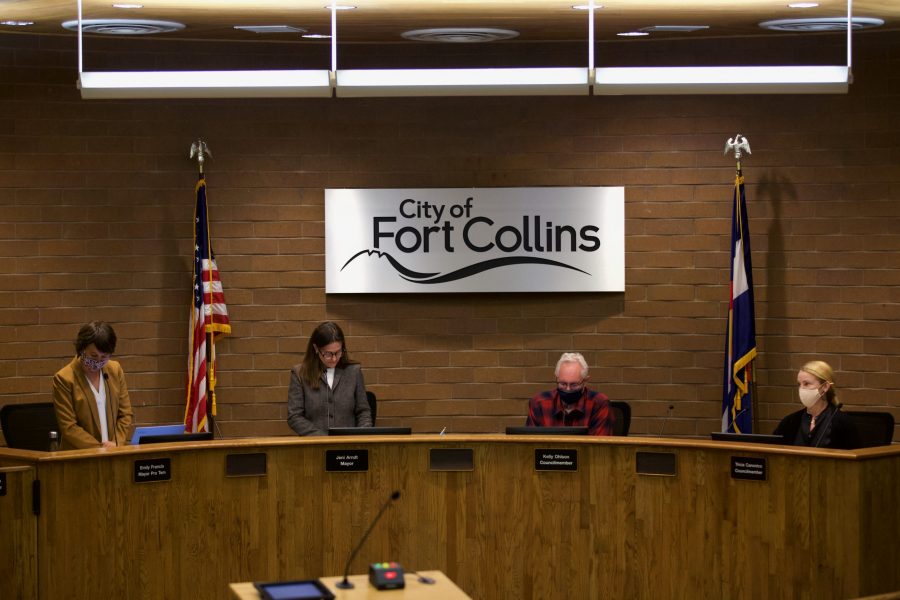 Fort Collins City Council in session Sept. 21. The City Council heard from community members and moved forward with a variety of ordinances impacting Poudre School District, local marijuana codes, infrastructure, and other aspects of the city. (Ryan Schmidt | The Collegian)

On Sept. 21, the Fort Collins City Council discussed the 1041 Regulations Project and the involuntary designation of a historical landmark in the City, among other topics. Councilmember Julie Pignataro was excused from the meeting, but the rest of the council attended in person. Mayor Jeni Arndt and Shirley Peel of District 4 kept their masks off the entire time in the chamber.

The council had their first reading of Ordinance No. 122, which was related to the adoption of 1041 regulations. These included imposing a moratorium on the construction of new domestic water systems and highways. Having a moratorium means the local government would have the power to delay or suspend an activity, project or law.

The vote was 5-1 with Peel being the sole vote against.

“I actually do believe pretty strongly in local control,” Peel said. “I am concerned that it does add another layer to the development process.”

Ordinance No. 122 would impose a moratorium on certain construction projects until Dec. 31, 2022. The purpose of this is to give powers to the local government to have control over development projects happening within their jurisdiction even if they have statewide impacts.

“I don’t see this as anything extreme at all,” District 5 Councilmember Kelly Ohlson said. “I view it as a cautious and reasoned approach with exactly what we said we were going to do.”

Another item discussed was the involuntary designation of a Fort Collins property, 528 W. Mountain Ave., as a Fort Collins landmark under Ordinance No. 121. The owners of the home do not support the nomination. The vote was 5-0 and the item has been moved to Dec. 21, so the council can have more time for consideration.

During the vote, Councilmember Tricia Canonico of District 3 recused herself from the item. For a council member to recuse themselves from an item means they remove themselves from the discussion and decision due to a conflict of interest.

The council is continuing to offer Spanish interpretations for comments during the meetings. Participants joining the Zoom meeting will be given an option to select a language — English or Spanish.

“This means that people can hear and speak the language of their heart,” interpreter Andrea Syko said.

Councilmember and Mayor Pro Tem Emily Francis called for an executive session to meet with the City’s attorneys and City management staff.

Deneice Dyer asked the council to allow her dance studio, Northern Colorado Dance, to continue to work on a contract basis. At her studio, she has a program for low-income families so they can also participate.
City pool use and the need for competitive lap swim in Fort Collins was discussed.
Tom Griggs, who is running for the Poudre School District Board of Education, talked about the City and school district working together to help high school graduates and offer options other than college.

For more information on how to join council meetings, go to the Fort Collins City Council webpage. A recording of the meeting is also available along with the voting results.