The Rocky Mountain Collegian • May 21, 2021 • https://collegian.com/articles/news/2021/05/category-news-fort-collins-protesters-join-in-solidarity-with-palestinians/ 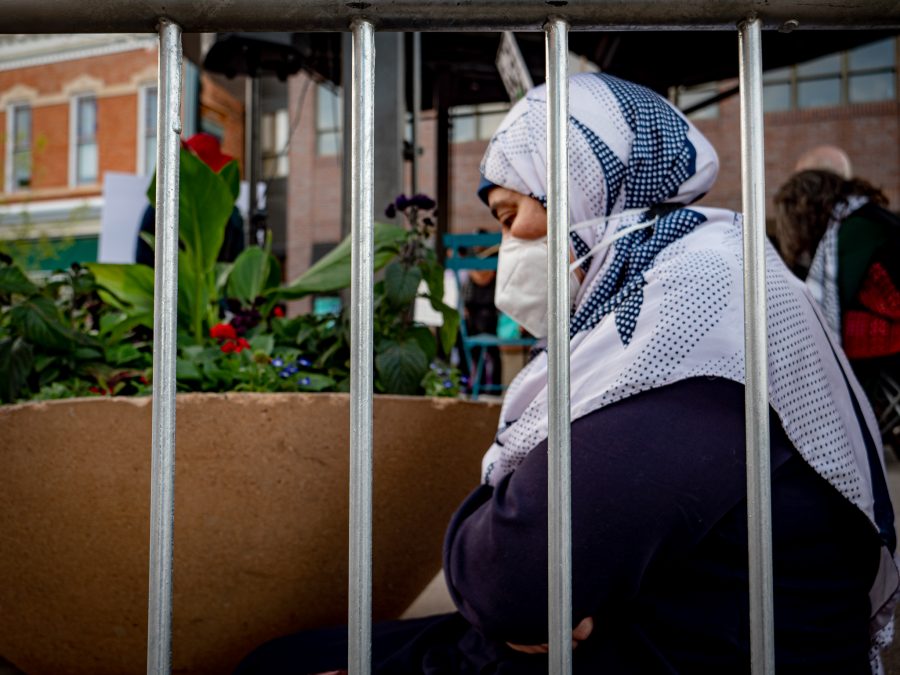 A local community member listens closely to a speaker at a rally in light of the violence between Palestine and Israel Fort Collins, Wednesday, May 19, 2021. The speaker at the time was unveiling their memories of living in times of the Arab Springs conflict and becoming immigrants. (Tri Duong | The Collegian)

As violence in recent days has escalated drastically in Israel and the Palestinian territories, protesters in Fort Collins came together in Old Town Square to stand in solidarity with victims in a peaceful demonstration for Palestinians.

Tawfik Aboellail, an associate professor at Colorado State University, began the protest by speaking on the importance of peace and safety, both for the Palestinian residents killed in airstrikes or other clashes with the Israel Defense Forces and for Israeli residents killed in Hamas attacks on Israel last week. Twelve have died in Israel, and more than 230 have died in the Palestinian territories as a result of the IDF’s military campaign, according to a May 17 New York Times article.

“We are not here to spread hatred but to stop it before it engulfs the whole region of the Middle East, if not the entire world,” Aboellail said. “We are not here to curse at the darkness but to light a beacon of hope, to help our politicians see through the layers of propaganda (and) fabrication.”

Dalal Alrmuny, another speaker at the event, spoke on her identity as a Palestinian and the hardships she and her father endured due to the displacement.

“My father had a dream, he always sat us down and told us that one day we will go back,” Alrmuny said. “My father passed away before he was able to go, but his dream still lives within all of us, within every Palestinian that is still alive.”

Alrmuny also spoke on the intergenerational trauma suffered by Palestinians,  as well as the helplessness and guilt that she feels for living out her life in the U.S. while other Palestinians are under occupation and bombardment in Israel. Alrmuny said that the tendency to discuss the Palestinian-Israeli conflict as “complicated” hides how clearly wrong the oppression faced by Palestinians truly is.

“Being Palestinian means looking up your home on (the) maps and not being able to find it,” Alrmuny said. “Palestine is not even on the map, why? It is there, my people are there, but Palestine is not on the map.”

The event was organized by the Muslim Student Association at CSU with help from the Islamic Center of Fort Collins. Shehab Elhaddad, president of the MSA, said the protest is important in raising awareness to the public so calls for the U.S. government to act can become more prominent. Elhaddad also spoke on the prevalence of child casualties in the recent violence. According to a BBC article, 63 children were killed in Gaza, and two children were killed in Israel.

“There are claims that, ‘Oh, Gaza started that,'” Elhaddad said. “A 2-year-old kid did not fire a rocket. … Palestinian kids cannot be murdered, should not be murdered; kids shouldn’t be murdered anywhere in the world. Why is that a double standard in Palestine?”

The crisis in Palestinian territories, with the Muslim population not being afforded as much recognition and awareness, is one Elhaddad said is faced in the Fort Collins community, especially for Muslim students at CSU. He said that a movement to get more support for Muslim students has been met with pushback from the administration.

“There has to be a scandal for CSU to take action,” Elhaddad said. “If you’re asking nicely, good luck getting anything. (There has been) great support for the Muslim Student Association and the Islamic Center of Fort Collins, but that is only when there is a crisis happening.”

Sue Ellen Klein, leader of Partners for Peace and a member of the Foothills Unitarian Church Universalists for Justice in the Middle East, said she was heartbroken over the recent events and spoke to the crowd about her experiences as a Jewish-American woman to understand the injustices faced by Palestinians.

“I grew up in an environment where I thought the creation of Israel after the Holocaust was a miracle,” Klein said. “There was something idyllic about it, its existence and growth seemed remarkable and we as Jews identified with it as our own. It has been a long process of learning for me personally, … understanding the true nature of the Israeli government’s actions to dominate, suppress and expel the people of Palestine.”

Klein spoke specifically about the Nakba, also known as the Palestinian Catastrophe, that displaced 700,000 Palestinians and destroyed more than 500 Palestinian villages in 1948 to allow for the creation of the Jewish state. She also spoke about how young the Palestinian population is and Israel’s harsh prosecution of children in military courts, saying that Israel is fighting “an intentional war against children” to eliminate unrest in the Palestinian territories.

Klein said these actions by the Israeli government create a dilemma for her and other Jews, who are taught the pursuit of justice is a fundamental tenet of Judaism.

“What does this mean in the context of Israel’s treatment of the Palestinian people and its children?” Klein asked. “When, if at all, do biblical readings and past realities override the responsibility to defend human rights and dignity?”