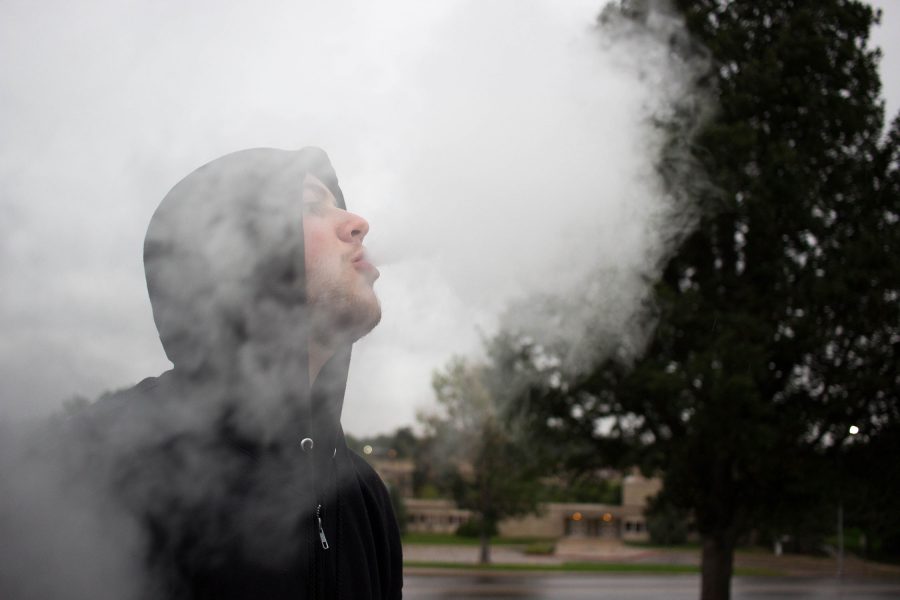 Gathered at University of Northern Colorado’s University Center UNC student, Austin Huber, vapes a “phat cloud”. Austin was the founder of the event, created to rid Greeley of its stink by vaping. He planned to create more events similar, to bring people together. (Anna Baize | Collegian)

Colorado State University’s Magzamen Lab has begun a study regarding the effects of electronic cigarettes on viral infections.

According to a flyer posted around campus, the study will be “investigating the effects of e-cigarettes on the immune system.”

The flyer also said the team behind the study is seeking participants between the ages of 18 and 30, both with or without “vaping habits,” who will receive compensation of $30 for their participation upon completion of a nasal swab if they qualify.

Research associate Sherry WeMott explained that the study plans to focus on the “nasal virome,” or the “nasal ecosystem,” as it relates to different viruses. She said previous studies have found that cigarette users often have lower “diversity” in the viruses within their respiratory tract, but are more susceptible to harmful pathogens.

“Our main objective here is to determine if e-cigarette use leads to this decreased diversity in the nasal virome,” WeMott said.

According to WeMott, students who qualify and choose to participate can expect to dedicate roughly 45 minutes to the collection of data for the study, which includes a survey about vaping habits and the collection of nasal swab samples.

The study is seeking 50 participants with recent vaping exposure and 50 without this exposure within the last 30 days to serve as a control group, she said.

Magzamen described the inspiration for the study as having arisen from the high level of “vaping activity” occurring around campus.

“We wanted to try to understand vaping behaviors as well as the changes that happen in your respiratory system when you vape or when you’re exposed to vaping,” she said.

Magzamen also expressed the lab’s interest in exploring how an individual’s vaping habits can relate to COVID-19.

“Although the study is not looking specifically at COVID(-19), we are interested in what we find in terms of the exposure in people who participate in the study … and if they have evidence of viral infections in their upper respiratory system,” Magzamen said.

WeMott and Magzamen explained that recent studies have found high levels of e-cigarette use among teens in Colorado — data that led to the inception of the study.

Data from the Colorado Health Institute in 2018 found that over one-fourth of Colorado teens are using e-cigarettes frequently, which is the highest rate in the nation.

“Our hypothesis on that is that the aerosols and the components from the e-cigarettes that are inhaled can interfere with those microbial communities in the upper respiratory tract,” WeMott said.

Ultimately, the team behind the study hopes to examine the risks involved with vaping despite the practice being viewed as a safer alternative to traditional cigarettes, WeMott said.

“We think it’s important for people to understand that it’s not a risk-free behavior,” she said.

Anyone who wishes to participate in the study can contact the Magzamen Lab at ERHS_magzamen_lab@colostate.edu or use the provided QR codes on flyers posted around campus.