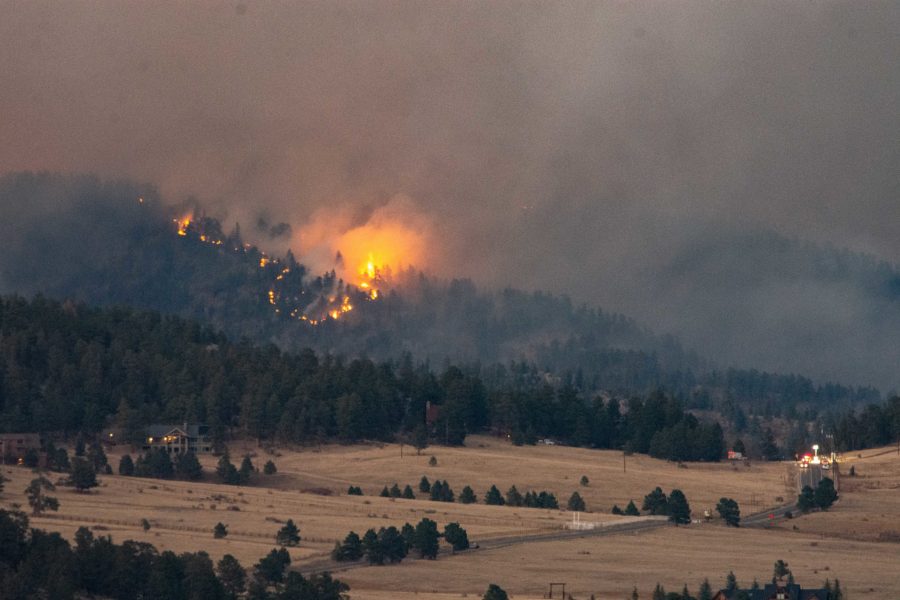 The Cameron Peak fire burns at dusk as it nears houses above Glen Haven, Colorado, Oct. 16, 2020. (Matt Tackett | The Collegian)

According to the City of Fort Collins’ website, the spring and summer months increase water demand. A major concern is runoff from the burned areas reaching the Poudre River and Water Treatment Facility. This could cause fire-related odor and taste.

According to the City’s website, water quality and availability is being monitored for ash and sediment. Fort Collins Utilities monitors water quality in the Upper and Lower Cache la Poudre River, Horsetooth Reservoir and treated drinking water. There are two early-warning water quality alert systems on the Poudre River to detect changes in water quality, such as ash or sediment-laden water.

“I want to be clear that water quality will always be safe,” said Matthew Zoccali, Fort Collins’ environmental regulatory affairs manager. “We have processes in place to treat water so that it’s safe to drink. But it will be more challenging when it’s filled with ash and sediment.”

Zoccali said a wildfire recovery preparedness response plan was created after the High Park fire. The plan included a pre-identified team that would meet ahead of fire season to be more proactive.

The City of Fort Collins is also working with the City of Greeley, Larimer County, the Natural Resources Conservation Service, the United States Forest Service, nonprofit watershed groups and other water providers to recover from the wildfires.

Zoccali explained that the Coalition for the Poudre River Watershed is “a nonprofit coalition that is focused on watershed health.” This group works with the cities and organizations listed above as well and works on wildfire mitigation and post-fire restoration.

Zoccali said the local community and various organizations, such as Trout Unlimited, the Bohemian Foundation and the Colorado Water Conservation Board, are also involved in recovery efforts related to the wildfires.

“We’re coming into severe weather season and fire season simultaneously, so all throughout the county we’re really going to be wanting people to be focused on the weather and making sure that they are keeping up with conditions and that they have a plan for both fire and flood,” Hodges said.

Piper Russell can be reached at news@collegian.com or on Twitter @PiperRussell10.