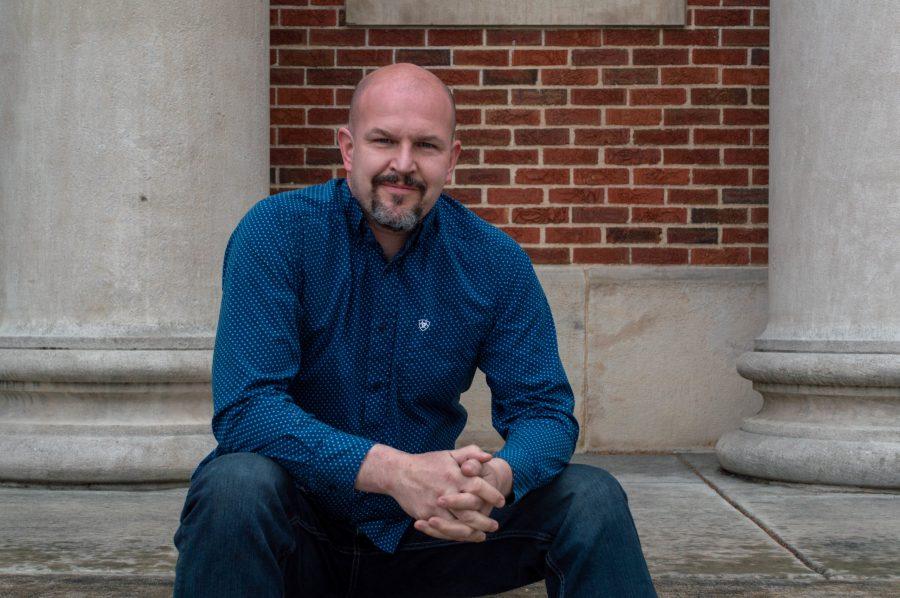 Jeff Hansen poses outside of the Colorado State University Center for the Arts between his door-to-door campaigns for Fort Collin's City Council March 21. (Laurel Sickels | The Collegian)

With plans to put words into action, Jeff Hansen is running on a platform of reconnecting Fort Collins.

Hansen has heard concerns from many people in Fort Collins through working on the Planning and Zoning Board and said that he wants to help them. However, the board can’t address all the concerns that Hansen has heard about.

Local politics actually have a more direct impact on your life than anything that’s happening in Washington, D.C. I encourage students to get out and vote.” -Jeff Hansen, District 5

Hansen said there hasn’t been much progress with many issues that City Council has planned to address, prompting him to run. These issues include the Climate Action Plan and creating livable neighborhoods.

“I’ve seen a lot of things that Fort Collins needs that past City Councils have addressed with words, but if you look at tracking progress toward those goals, then they’re not accomplishing what they set out to do,” Hansen said.

The overall theme of Hansen’s campaign platform is to reconnect. Hansen spoke about how there is a “complex web of attributes that work together to make Fort Collins such a great place.”

“COVID-19 and the current political climate has really started to stress that quite a bit, and we really need to work on making those reconnections to keep Fort Collins a great place to live,” Hansen said.

According to Hansen, many ideas to help small businesses stay open came from the businesses themselves, like when the City gave up parking spots to expand sidewalk dining into the streets.

“We need to keep a good relationship with them and keep an open ear and open mind to their ideas because that’s where it’s going to come from, is from the business community,” Hansen said.

Another growing concern for Hansen is the cost of housing in Fort Collins. If elected, one of Hansen’s highest priorities will be to slow rising housing costs.

Hansen became familiar with the City’s strategic housing plan and its goals as a member of the Planning and Zoning Board.

“I think the plan generally has good ideas, but I think they’re approaching it a little bit slower than what’s warranted due to the rate that housing costs are increasing,” Hansen said.

The Housing Strategic Plan has some short-range goals that can be implemented in around six months and some that could take 20 years to implement. Hansen would look at expanding the rental portfolio, which is limited by the U+2 ordinance.

“We need a policy around occupancy limits that’s more flexible and adapts to the individual circumstances of any one house,” Hansen said.

Along with his experience on the Planning and Zoning Board, Hansen spoke about his ability to react well to opposition and how his skill set and profession will allow him to accomplish goals.

“I’m a thinker, a planner and a problem solver, so I know that my unique approach will benefit the City of Fort Collins,” Hansen said.

Hansen aims to continue the City Council’s work on climate issues, preserving natural space and eventual response to ideas from the business community to help stay open during the COVID-19 pandemic.

Further, there is a large student population of registered voters in District 5. According to Hansen, local politics are relevant to college-aged students.

“Local politics actually have a more direct impact on your life than anything that’s happening in Washington, D.C.,” Hansen said. “I encourage students to get out and vote.”

Piper Russell can be reached at news@collegian.com or on Twitter @PiperRussell10.