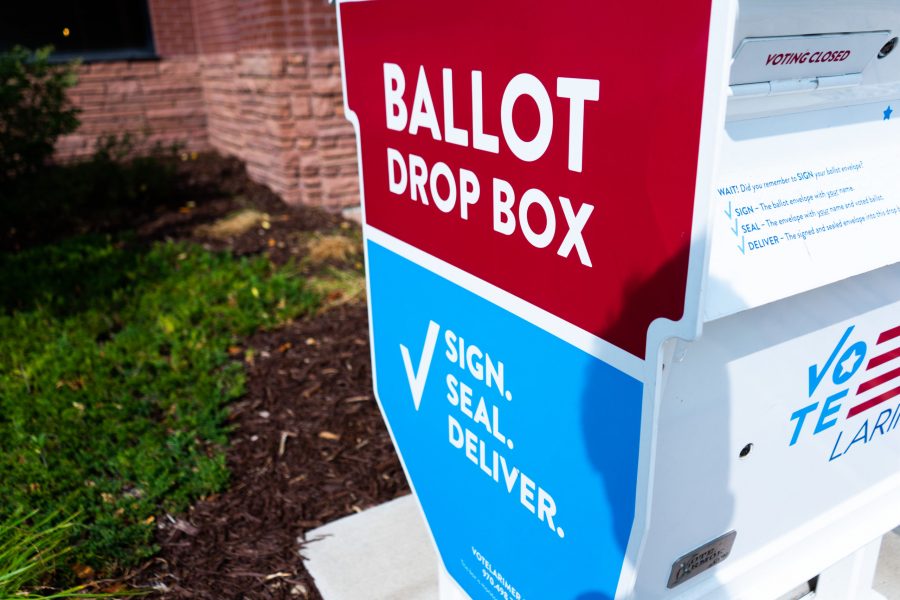 A ballot drop box outside of the Larimer County Courthouse Offices Sept. 15, 2020.

In the aftermath of the 2020 election, political science professors from Colorado State University reviewed the results at the state and federal level during an online debriefing of the historic event.

On the national scale, Democratic candidate Joe Biden was declared the winner of the presidential race by the Associated Press. The House of Representatives maintained a slimmed-down Democratic majority, and two runoff races in Georgia will determine who controls the Senate.

“I tend to think that this election really just revealed the deep divisions in the American electorate, and they are there, and they are going to continue,” said Kyle Saunders, a political science professor at CSU.

“I think the one thing that we can do in the U.S. — and that, for me, this … pandemic election has been good for — is (get) more creative and (think) about ways to make it easier for people to vote.”-Courtenay Daum, political science professor

Negative partisanship, or “anger with the other side,” is strong and getting stronger, Saunders said. It’s both an elite phenomenon as well as a mass phenomenon, and, based on recent trends, it has led to a decline in trust and institutions “that are basically tearing our social fabric apart,” Saunders continued.

“I do think it is one of the pressing problems of our time that affects our ability to solve a lot of the other problems that we face,” Saunders said.

Though it was already prevalent in 2016, Donald Trump is a figure who has further generated political polarization over the last four years, Saunders said.

The panel of professors expressed their dismay at the sitting president’s baseless efforts to cast doubt on the legitimacy of the election results.

“I am really discouraged by the buildup to the election in the aftermath of the election — the just absolute attack on the integrity of the electoral system,” said Courtenay Daum, another political science professor. “And I think that the damage that that does intersects with increased polarization in ways that we can see the ramifications of … for many elections to come.”

Biden and Democratic Senate candidate John Hickenlooper won by significant margins in Colorado, and Democrats will hold the majorities in the state legislature, according to The Colorado Sun.

With many saying 2020 was the “repudiation of Trump,” Coloradans may still have to wait and see if the blue shift is a temporary reaction or a more permanent preference change, Duffy said.

In terms of the state ballot issues, it was a mixed bag, particularly with the tax initiatives. Voters chose to, in essence, raise taxes by passing new nicotine taxes and paid medical and family leave, while also decreasing the state income tax.

Duffy said he doesn’t have a good explanation for this, though he did share some potential case-by-case explanations for the contrasting votes.

As tumultuous as this election season has been, panelists drew attention to one silver lining: extraordinary voter turnout, both nationally and in the state.

Early projections suggest a national turnout of 66.9%. According to the U.S. Elections Project, it’s the highest it’s been in 120 years.

In Colorado, 78% of registered voters cast a ballot this year, putting the state in the top five for voter turnout, according to The Colorado Sun.

And Daum said she does not think that turnout is simply a reflection of how people felt about the presidential candidates but also because of the offering of more convenient, alternative ways to vote.

“I think the one thing that we can do in the U.S. — and that, for me, this … pandemic election has been good for — is (get) more creative and (think) about ways to make it easier for people to vote,” Daum said. “So I would just like to see us, at the minimum, focus on doing that moving forward.”