Becoming Kaz: A journey of self-acceptance 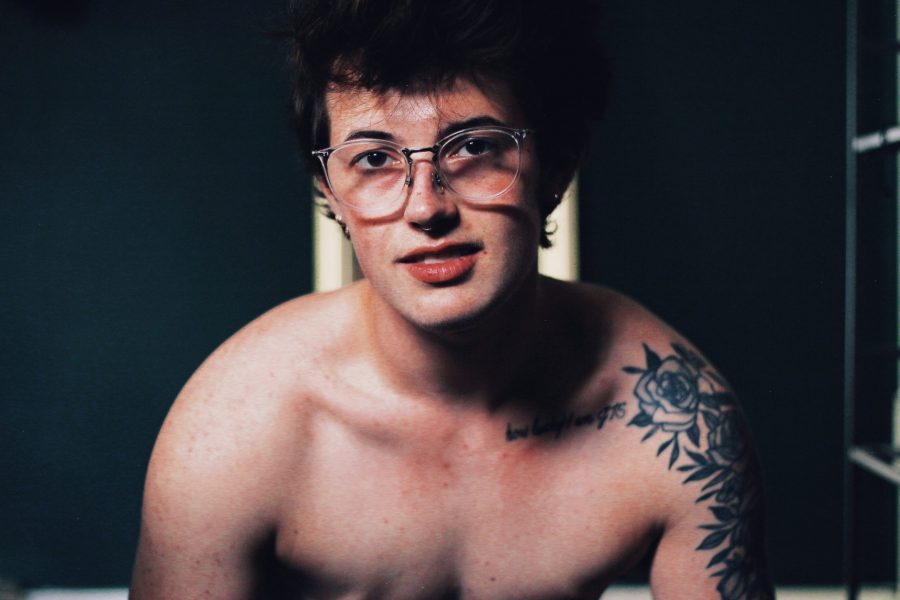 Self portrait taken on Sept. 22. (Photo courtesy of Kaz Smith)

Kaz Smith was four when he knew something was missing.

It was after he decided he wanted a haircut just like his childhood friend Dylan Mentzer.

He signaled to the hairdresser how short he wanted it, holding his hands just above his ears. However, his mom had other ideas.

Kaz got a bob cut instead.

And though he disliked his new hair, he ended up cutting it again when he was 16 years old.
“Any time someone chooses to come out is the perfect and right time. There’s no scripted timeline of coming out. … You can choose person by person when it feels right in a way that feels right, and that’s how it was supposed to be for you.”-Maggie Hendrickson, assistant director of the Pride Resource Center
Cutting his hair was the first step in his journey to becoming more comfortable with who he is.

It was three years later, when Kaz was 19, when he took up climbing. He became closer to his own body and learned more about how it works.

Climbing is a sport that involves being connected to your body and its capabilities in order to successfully complete routes, he explained.

“Dysphoria had me so disconnected from my body … that when I started climbing, it felt like I was in my body in a way that I never had been before,” he said.

He explained that when he began understanding how his body worked, the discomfort he had been feeling wasn’t fake or something that everyone experiences.

“It’s a hard process to start understanding that, but it also was really empowering in a way because I had felt really disconnected for so long, and now it all made sense,” Kaz said.

Disconnect was not the only battle Kaz was fighting. Self-doubt was also a large factor in his journey — something he described as “inevitable.”

Questions like “Are you sure?” “How do you know?” and “Maybe it’s just a phase” are just some of the uncertainties that come up.

“If that’s all we’ve been given, it makes sense that we’d question our own feeling (and) experiences,” Kaz said.

Assistant Director for the Pride Resource Center Maggie Hendrickson explained that having the “intent versus impact” conversation is worth having with loved ones.

“Usually those questions come from a place of care, like if it’s … family members or partners wanting to make sure that you’ll be happy and safe and healthy,” Hendrickson said. “But the way that it reads or the way that it lands is, ‘I don’t think you know what’s in your best interest. I think you’re making an irrational decision’ or that your identity is not real.”

Through communicating with them about the impact of these statements, it can help them realize that even though their intent may be well-meaning, the questions could still be landing in a different way, they said.

Kaz explained that every time he had a solid plan for coming out as transgender to his family, the self-doubt would derail it.

When he did come out to his family, they told him he should wait years before beginning any sort of transition. Though the period between this and his parents coming around to the idea was only a few months, it felt much longer to Kaz.

“Any time someone chooses to come out is the perfect and right time,” Hendrickson said. “There’s no scripted timeline of coming out. … You can choose person by person when it feels right in a way that feels right, and that’s how it was supposed to be for you.”

They explained that coming out can be a process full of anxiety, but, ultimately, it is an individual’s step for moving toward a more authentic version of themself.

Kaz has known he wanted to have top surgery for years, but funding the operation was yet another obstacle.

His parents weren’t planning on financially supporting surgery if he went through with it before completing school, so he started a GoFundMe.

“It was kind of in the middle of when they were starting to understand that I wasn’t making it up or wasn’t just saying it to have something about my life change or whatever they thought,” he said.

Once his parents saw the donations coming in and the impact it was having, his dad said he would match the donations, putting only a quarter of the financial burden on Kaz.

Leading up to the operation, Kaz’s mom encouraged him to pursue other options before deciding.

“At first, that really bothered me,” Kaz said. “I was like, ‘I know what I want to do. If this is going to be all up to me, I should be able to make the decision,’ and then I ended up deciding to meet her in the middle.”

Kaz’s mom wanted him to go to a consultation with a surgeon who is recognized by The World Professional Association for Transgender Health, an organization he said catered toward binary trans people, not nonbinary people.

“Because of that, I didn’t want to abide by that system,” he said. “But in order for my parents to support me through surgery, I had to meet them in the middle and at least attend a consultation with this surgeon.”

Kaz ended up choosing this surgeon because he did not base his practice off of WPATH, even though he was listed on its website.

“After waiting a few extra months, it was clear that he was the person I wanted to go with for surgery,” he said. “The wait is worth it. It’s frustrating as all hell, but it’s worth it in the end.”

“If you have a cold and you notice you have a cold because your nose is stuffy, you miss being able to breathe properly through your nose,” he said. “But for me, it was like my nose had been stuffed my entire life, and I just didn’t realize it until I was older. It was like going back to a normal I never had before.”

And though surgery helps many affirm their identities, Fort Collins resident and NoCo Eclectic member Autumn Patterson explained that surgery is not a requirement to identify as trans.

“You don’t have to do the surgery to be trans,” Patterson said. “That’s not the way that works. And usually, if you give yourself enough time to understand who you are, be comfortable with your gender, it will become obvious, eventually, what to do.”

Kaz’s healing process has been a success, but the downside for Kaz was getting cleared to climb the day quarantine began in March. However, this turned into a positive because it gave him time to be physically able to go back instead of pushing himself to climb before he was ready.

Looking to the future, Kaz sees a challenge in learning how to walk the line of being proud of who he is while fighting to feel comfortable being out in certain spaces.

“There’s just this line that I’m learning how to walk of ‘Should I talk about it everywhere?’ I don’t know,” he said. “It’s just a difficult thing to figure out before it happens.”

Hendrickson explained that any decision made around an individual’s safety is valid. Even if they want to be fully out, waving a trans flag, it may not feel like it’s the right safe space to be doing that.

It is times like these when individuals may alter their gender expression or ask people to not use their pronouns in public in order to avoid negative attention, they said.

“Those things can feel like moving a step backward or back into the closet, but we can make decisions to protect our own safety and our own well-being,” Hendrickson said. “It’s part of the long game. It’s not just a sprint — it’s a marathon of finding ways to bench the system and figure out ways for us to be out.”

Every person is capable of making decisions surrounding their safety and well-being, Hendrickson said.

“It doesn’t make them any less trans, any less valid or any less proud,” they said. “Sometimes it’s just about safety.”
Practicing inclusivity
Ash Powers, a Colorado State University fifth-year social work major, said that being more conscious before speaking would help inclusivity.

Powers explained that neutralizing and expanding on gendered language as we know it will be a major step in the right direction.

“I’ve noticed with folks my age or a little younger that they’ve already been kind of eliminating (gender specific language) or just waiting to use it when they find out someone’s gender,” Powers said.

Patterson said that speaking more generically will allow trans individuals to feel they are part of the conversation.

Additionally, being supportive and listening is a way to move forward to a more inclusive world.

“I think the best support that friends can give is just to say, ‘I’m going to walk this path with you, even if I don’t understand it,’” Patterson said. “‘I’m going to listen, and I’m going to be a shoulder to cry on, and when things are hard, I’ll be there, and when things are good, I want to hear about it.’”
Finding comfort in being yourself
Kaz explained that it’s okay if someone starts doing something to affirm their identity and it doesn’t feel right. Telling them, out of fear, to not pursue a path that may or may not help them be who they are is taking away the opportunity for someone to learn about themself.

Hendrickson explained that finding opportunities where you can be “totally and authentically yourself” is a way to help navigate barriers trans individuals may face, whether it is through virtual communities or chat groups.

“I think a lot of people are afraid of that, ‘Oh, we’re breaking humanity because we’re trans,’” Patterson said. “It’s like, ‘No, admitting that we’re trans and embracing that is fixing what’s broken.’”

Finding comfort also comes from just being — something that a lot of trans people struggle with, according to Patterson. This can help individuals eventually feel comfortable with their bodies, she said.

If someone begins to socially or medically transition and they realize that that is not who they are through that, Kaz said that’s okay and “there’s no wrong way to do it.”

“All I can say is I’m more comfortable now than I have ever been,” Kaz said.