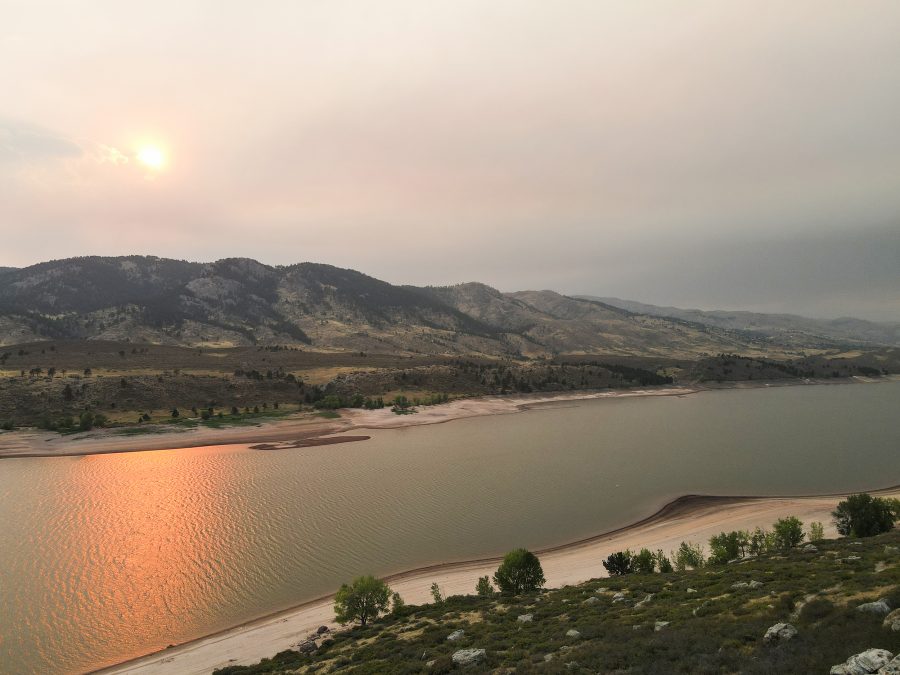 After weeks of wildfires close to Fort Collins, Horsetooth Reservoir sits in a cloud of smoke Sept. 7. In addition to the Fort Collins region being covered by a blanket of smoke, a layer of ash covered cars and the sidewalks. (Lucy Morantz | The Collegian)

Smoke has overtaken the sky as the fires around Colorado continue.

The two fires closest to the Fort Collins area — the Mullen fire and Cameron Peak fire — have over 2,000 personnel working collectively. The two are 25 miles apart, according to the Incident Information System.

This updated acreage makes the Cameron Peak fire the largest fire in Colorado, passing the Pine Gulch fire by over 39 square miles.

The Cameron Peak Fire now exceeds 158,000 acres and surpassed the Pine Gulch and Hayman fires to become the largest fire in the history of our state. All Colorado and the world cheer on our brave firefighters in their efforts to protect population centers and contain the fire

In a video update, incident meteorologist Aviva Braun said that the wind gusts reached 60-70 miles per hour in certain areas, moving the Cameron Peak fire east. For the remainder of the week, the wind gusts are expected to be lower, Braun said.

“We will be getting these stronger winds this week, with no moisture really in the forecast, so the conditions will remain challenging, just not nearly as serious as they were (on Oct. 14),” said Braun.

Mandatory evacuations are in place in Horsetooth Mountain Open Space and Lory State Park, along with others, according to NoCo Alert.

According to InciWeb, residents in the area should evacuate immediately due to “imminent danger.” Lory State Park is approximately 11 miles from Colorado State University campus.

This is the Larimer County Sheriff's Office with updated evacuation information. Cameron Peak Fire officials have upgraded evacuations from voluntary to Mandatory for Lory State Park. Residents and business occupants should evacuate the area immediately https://t.co/utFUcgydKZ

“As soon as we have the ability to start putting a structure count or assessment we will,” said Larimer County Sheriff Justin Smith in the video update. “We have no reported injuries, no deaths, a lot fewer structures were impacted than we truly anticipated based on what we saw.”

The Rocky Mountain Type 1 Incident Management Team took command of the fire on Oct. 14 at 6 a.m. This team is called in when the situation has become unmanageable for local authorities and resources to take on, according to the team’s website.

“Things will calm down a little, but we’re expecting almost, if not as much, activity (Oct. 15), and on into the next day,” Deputy Incident Commander Dan Dallas said in the update. “We’re not through this wave of activity yet. … Just expect a couple more kind of hard days.”

The Mullen fire still continues to burn along the Colorado-Wyoming border with 1,147 total personnel, according to InciWeb. The fire has destroyed over 60 structures and evacuated 1,440 people evacuated from the area.

On Oct. 15, the air quality index was 134 when it was last updated at midnight, giving it an orange ranking, meaning that people part of sensitive groups may be impacted.

The estimated containment date for the Mullen fire is Oct. 30, followed by the Cameron Peak fire at Nov. 8.

The CSU Public Safety Team sent out an email to the University community offering support for those evacuated. Those impacted by evacuations can find resources on the Commitment to Campus website.