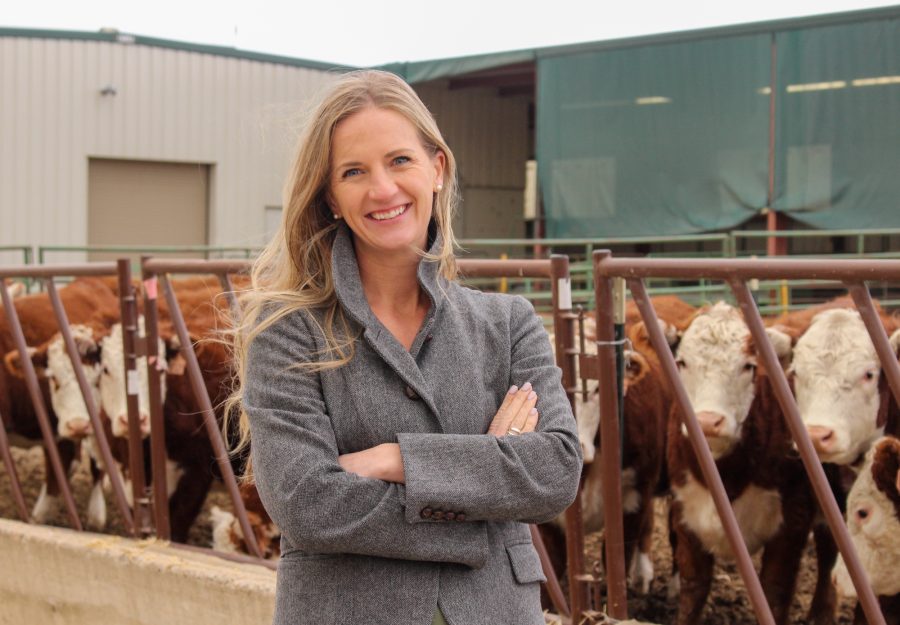 First Director of Sustainable Livestock Systems, Kim Stackhouse-Lawson, at the Colorado State University’s Agricultural Research, Development and Education Center Oct. 22. “Something that inspires me every day is to give back to an industry who gave me so much,” Stackhouse-Lawson said. "The livestock industry just embraced me, where I came from and who I was with open arms. It's always been what I’ve wanted to do."

Colorado State University has named Kim Stackhouse-Lawson as the first director of its new Sustainable Livestock Systems Collaborative, which was announced last December. The collaborative will work to improve livestock sustainability around the world.

Stackhouse-Lawson said that the collaborative is new to form and plans to use insights from various stakeholders to address challenging sustainability topics in livestock.

“I think that there’s so much opportunity, and it’s so exciting to address some of the world’s most pressing challenges as it relates to food.”-Kim Stackhouse-Lawson, Sustainable Livestock Systems Collaborative director

“When we think about our goals, I think it’s really to ensure that livestock-based protein continues to be a sustainable component of our food and natural resource system,” Stackhouse-Lawson said.

Stackhouse-Lawson also said the collaborative plans to help advance the science of livestock sustainability as they go through the developmental process.

“It’s really exciting to build a world-renowned program and team,” Stackhouse-Lawson said. “It’s going to be difficult and a lot of work to build this. But I think that there’s so much opportunity, and it’s so exciting to address some of the world’s most pressing challenges as it relates to food.”

She said that it’s also exciting to have the opportunity to build a team that’s diverse in knowledge and perspective at CSU.

Stackhouse-Lawson was one of the first students to graduate with an emphasis on livestock sustainability, she said. According to Stackhouse-Lawson, her Ph.D. is in animal biology, but she specifically studied the impacts of dairy and beef cattle on the environment; this includes greenhouse gas emissions, ammonia emissions and a variety of different air quality impacts associated with livestock production.

“I also did a lot of systems modeling work,” Stackhouse-Lawson said. “So actually modeling nutrient flow through the entire livestock system. I also did some work in animal welfare and animal behavior, so (it’s about) really understanding both the animals’ impact on the ecosystem but also the environment’s impact on the animals.”

Stackhouse-Lawson grew up in northern California, which she said is similar to Colorado’s unique agricultural climate.

“It’s just a part of who we are in so many societies, and we are going to need to continue to innovate and find solutions to continue to improve the sustainability of all food systems and livestock food.” -Kim Stackhouse-Lawson, Sustainable Livestock Systems Collaborative director

“I feel very at home here,” Stackhouse-Lawson said. “I still have a lot to learn about  Colorado in general. When you don’t grow up in a place, I think there’s always an opportunity to learn more about the dynamic system that’s here, but I’m very excited about that.”

Stackhouse-Lawson said the collaborative will do important work for the future.

“As we innovate to feed the world, there’s only going to be more people,” Stackhouse-Lawson said. “And feeding all of those people is potentially the greatest challenge of our time, especially when you look at the developing nations across the globe.”

According to the book “Minding the Stock: Bringing Public Policy to Bear on Livestock Sector Development” by the World Bank, developing countries are demanding more animal-sourced food at increasing rates.

“Growing demand presents real opportunities for economic growth and poverty reduction in rural areas,” the book’s executive summary reads. “It could directly benefit the 1 billion poor people who depend on livestock as a source of income and subsistence.”

Stackhouse-Lawson said that, oftentimes, when developing nations obtain new resources to spend, they begin to incorporate more meat into their diet. She said this is important because meat does so much from a nutrition standpoint, as it helps with enhanced cognition and brain development.

“It’s also very much a part of how people sort of comfort themselves or how they might engage socially,” Stackhouse-Lawson said. “It’s just a part of who we are in so many societies, and we are going to need to continue to innovate and find solutions to continue to improve the sustainability of all food systems and livestock food.”

Bill Hammerich, a representative of the livestock industry on the workgroup charged with creating the SLSC, wrote in an email to The Collegian about the importance of the project.

“I am excited that Colorado State University recognized the need to be proactive and position themselves as a leader in addressing the challenges of feeding a growing world population and focusing on the need to do it in a sustainable way,” Hammerich wrote.

Hammerich also praised Stackhouse-Lawson as the first director of the collaborative.

“Stackhouse-Lawson brings impeccable credentials and a superb understanding and knowledge of the livestock industry, which will serve her well in her new role,” Hammerich wrote.

Stackhouse-Lawson said she is excited about the opportunities the new collaborative may bring to CSU students.

“For a CSU student to be able to influence the way livestock are raised and to learn how to influence that in a collaborative and solutions-oriented fashion is really special,” Stackhouse-Lawson said. “Hopefully we’ll set up students to be successful in whatever they do because these are the sorts of wicked problems that teach us how to think.”