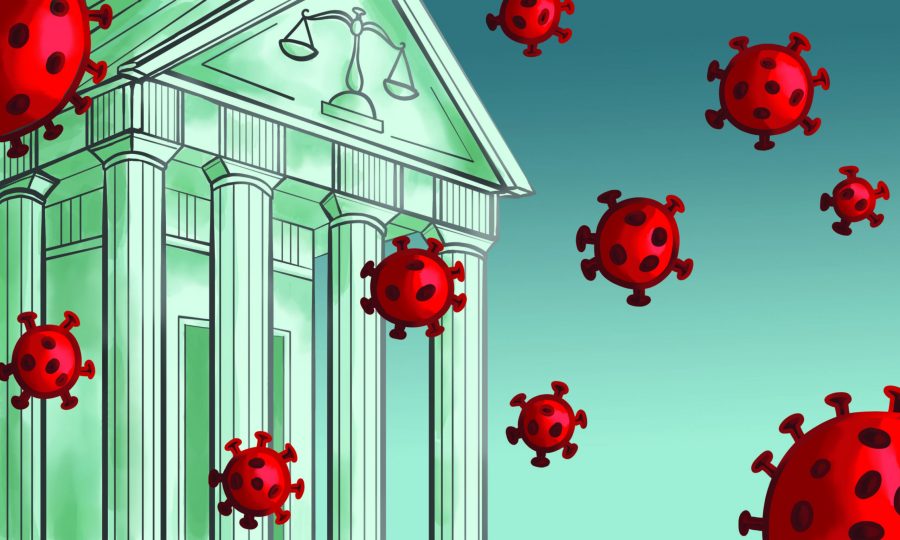 As of Sept. 22, there are over 2,000 cumulative cases of COVID-19 in Larimer County and 285 at Colorado State University.

With the rise of cases, students may be interested in their legal options in the event they get sick due to in-person learning.

In the first two weeks of in-person classes, there were 52 cases recorded, and in the two weeks following there were 71, according to the COVID-19 Recovery website.

President Joyce McConnell sent an email to students on Aug. 20 suggesting that they are at fault for the spread of COVID-19 on campus.

“I don’t think there’s much doubt that having students return to campus in the middle of a pandemic is negligent … given what our numbers are in Colorado.” -Igor Raykin, attorney at law

“To those of you who are not compliant with state, county and University health protocols: you may be the reason someone loses their life,” McConnell wrote. “It is that serious.”

Wastewater testing, contact tracing and the daily symptom checker have been put in place by the University in an attempt to mitigate the spread. Despite these efforts, the case numbers at CSU continue to rise.

“It really, truly is a collaborative effort across campus which bodes well with our ability to finish out the semester in the environment that we’re in,” said Marc Barker, co-chair of the Pandemic Preparedness Team.

Attorney Igor Raykin explained it is highly unlikely that students would be able to hold the University legally liable if they get seriously sick from attending classes on campus.

However, because CSU is a public university, a lawsuit of this nature would be more difficult to pursue.

Four elements need to be met in order to prove negligence, according to Cornell Law School:

-The defendant owed a legal duty to the plaintiff.

-The defendant’s failure to meet that duty.

-The plaintiff suffered an injury.

-Evidence that the defendant’s failure caused said injury to plaintiff.

“I don’t think there’s much doubt that having students return to campus in the middle of a pandemic is negligent … given what our numbers are in Colorado,” Raykin said. “Certainly, you could make a plausible argument that having a bunch of students come back to campus and sit in a classroom is negligent.”

Raykin explained that there is no plausible avenue in which students could hold CSU liable for getting COVID-19, one of the reasons being the Colorado Governmental Immunity Act.

“The CGIA was enacted to protect Colorado’s government and taxpayers from bearing an excessive monetary burden for damages suffered by personal injury claimants in tort cases,” according to lawyer Anthony Viorst.

According to Raykin, the act prohibits lawsuits against government entities with very limited exceptions. Even if there were an applicable exception for this situation, the standard would be much higher than negligence, he explained.

In order to prove that CSU was responsible for the student’s illness, Raykin would have to demonstrate that CSU behaved in a deliberate manner to get students ill, a standard he would not be able to meet, Raykin said.

“In other words, (I could not prove) that (the University was) essentially intentionally trying to get students sick,” Raykin said. “There’s just no way I would ever be able to prove that. It simply would be impossible.”

Editor’s Note: A previous version of this article incorrectly paraphrased a statement made by Raykin and has been updated to fix that.

Joshua Kellogg and Laura Studley can be reached at news@collegian.com or on Twitter @sc0o0rche and @laurastudley_.