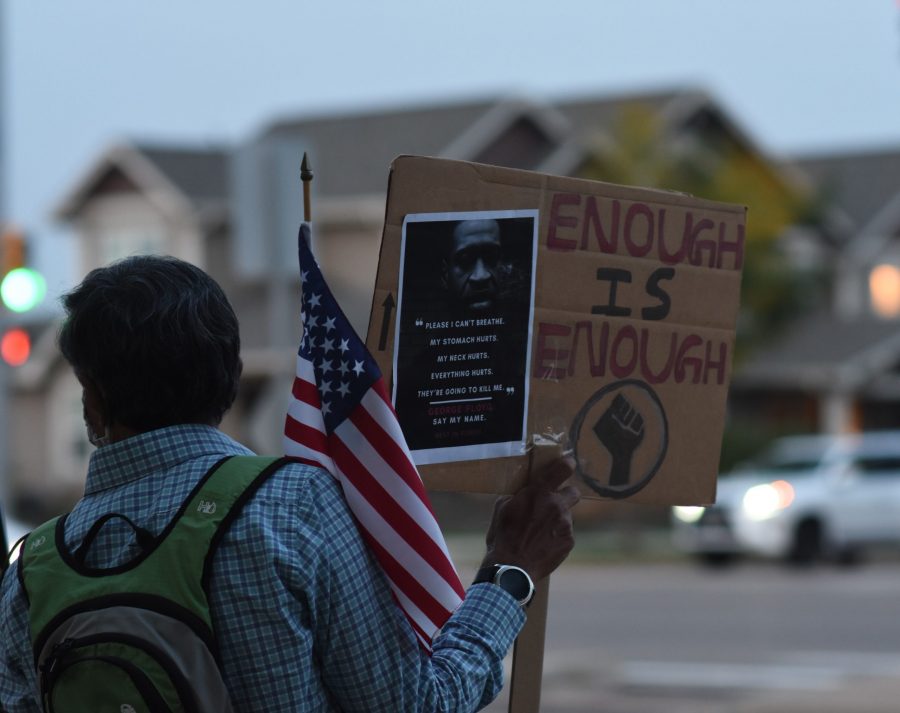 A man holds a sign calling for racial justice at the Rally for Justice. (Tri Duong | The Collegian)

The demonstration took place in front of the Fort Collins Police Services building, where approximately 20 people gathered along the road. Demonstrators held signs demanding racial justice, both locally and nationally.

FoCo PIE describes itself as a community organization dedicated to dismantling all forms of injustice, according to their website. Sabrina Santos, the volunteer coordinator for FoCo PIE, explained their goals for the evening.

“We are focused on giving people tangible things that they can do,” Santos said. “Standing outside is a great physical demonstration, it’s a great reminder to our community of what’s going on, but we also want to give our volunteers a way to get more active to make a bigger difference instead of just being physically present.”

The rally focused on encouraging conversations between community members and providing resources for further involvement. Organizers brought posters with information about local resources, like the Fort Collins City budget public hearing and the Colorado Freedom Fund, as well as national resources, like The Innocence Project and Save the Post Office.

Shayne Weber, a first-year graduate philosophy student and a research volunteer for FoCo PIE, expressed why he felt the need to attend the rally.

“I feel like I have a personal and moral responsibility to specifically speak out against injustices specifically caused by white supremacy,” Weber said. “Specifically as a white male, I have to make sure that I don’t allow that representation to continue, and I have to be vocal and active against that, otherwise I’m just complicit.”

“We have a moment here that has galvanized people, and I’m here to make sure we have that momentum.”-anonymous demonstrator

One demonstrator, who wished to remain anonymous over safety concerns, expressed how her identity as a Hispanic woman has influenced her relationship with racism. She explained how people treat her differently when she is around her family versus when she is with her husband, who is white. She also discussed the movements for racial justice going on around the country today.

“This has gone on since before I was born,” the demonstrator said. “We have a moment here — maybe it’s part pandemic, maybe it’s the different things that have caught the attention — … that has galvanized people, and I’m here to make sure we have that momentum.”

FoCo PIE focuses on engagement with the community and organizes a variety of demonstrations aimed at fighting injustices and raising awareness, according to their website. Currently, the organization is focused on the Fort Collins City budget and changing the way in which funds are allocated. Among other things, FoCo PIE is focused on the deferral of affordable housing funds, according to their social media.

Santos expressed how FoCo PIE has been trying to encourage people to be active in the process.

“It’s hard to understand (and) it’s cumbersome, and the more citizens that get involved and give feedback (in the budget process), the more those things will change,” Santos said. “That’s really the biggest thing that we can do — … just get involved and be talking to our City council, be talking to representatives, letting them know what you want because they are there to represent you, and if they don’t hear from you, they don’t know what to represent.”

Chelle Costello, a professor at Aims Community College, expressed the importance of showing up at demonstrations.

“They still matter,” Costello said. “Black lives still matter, and I want people of color to know that we still care and that we’re still out here, we’re still fighting for them. If one Black life sees the sign and they’re like ‘OK, people haven’t forgotten,’ then that’s worth it to me.”