Violence, conversation breaks out at Back the Blue rally 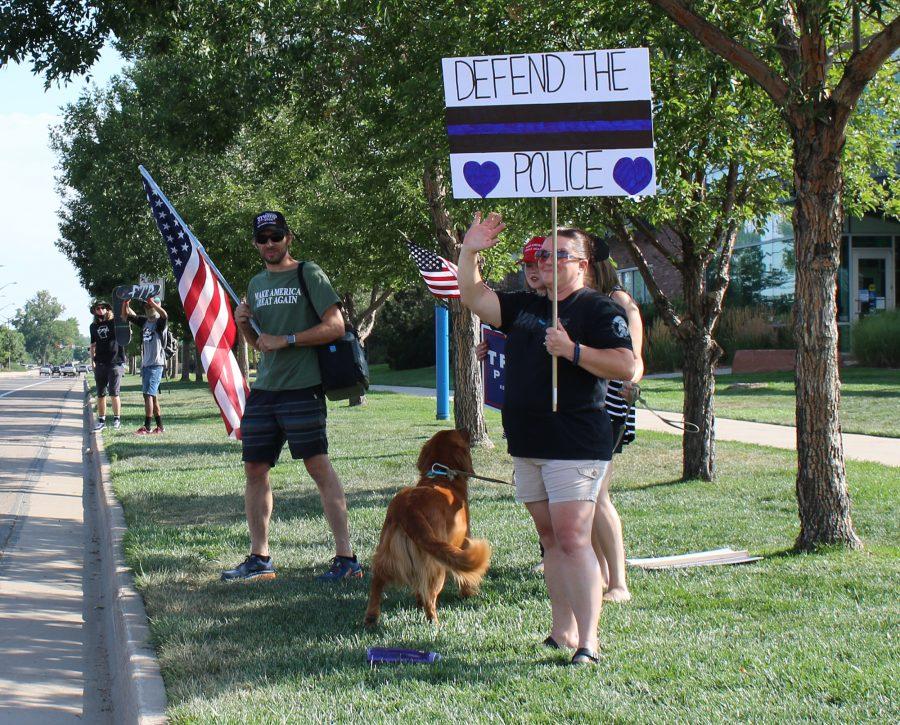 Demonstrators hold signs in support of the police outside the Fort Collins Police Services station on Timberline Road Saturday, Aug. 8, 2020. Violence broke out between groups of protesters and counter protesters earlier in the day that resulted in five arrests by FCPS.(Serena Bettis | The Collegian)

Editor’s Note: Please be advised that the videos in this article feature physical violence and swearing.

A pro-police rally outside the Fort Collins Police Services building on Timberline Road turned into an event that featured both violent altercations and productive conversations.

The Back the Blue rally Saturday afternoon featured protesters spread out along Timberline Road in front of the FCPS building, waving United States and “Thin Blue Line” flags and holding signs that read “Defend the Police.”

“We have to defend the police and the role that they play in society for keeping law and order and keeping citizens safe,” said Sonya Beeson, a Back the Blue protester.

Julius Philpot, a CSU alumnus and frequent speaker at local Black Lives Matter rallies, said the altercations started when pro-police protesters crossed the street to have a conversation with a few counterprotesters.

“As soon as I approached, I see people that have come from the side of the street from the pro-cops, they are wanting to, I want to say, … surround maybe three or four individuals who are holding up these signs that say Black Lives Matter to have a conversation,” Philpot said.

Philpot said that after about 20 minutes, a group of people dressed in “all black tactical gear” walked up to the side of the street the Black Lives Matter counterprotesters were on.

We have to defend the police and the role that they play in society for keeping law and order and keeping citizens safe.”-Sonya Beeson, protester

Based on video footage of these events obtained by The Collegian, it appears that it was at this time that physical altercations broke out between protesters and the second set of counterprotesters.

Ciara Wilson, a local high school student and organizer with the Fort Collins People’s Initiative for Equity, said that when she arrived at the protest, the atmosphere was already very hostile and quickly worsened.

“I think it’s quite disgusting,” said Brian Loma, founder of the Denver-based Cut the Plastic. “I value that these people want to have a rally and they want to hold the line, but what I saw was women and as well as some gentlemen being forced, pushed, not only off the sidewalk into the street and then basically chased for two blocks into a trail.”

Loma frequently attends Black Lives Matter rallies and livestreams them on the Cut the Plastic YouTube channel. His livestream from the Back the Blue rally can be seen below.

“Once they get all the way down the street from the police station, it just goes into an all-out brawl in the middle of a grassy pit,” Wilson said. “10 to 15 people just piled up on top of each other. Chokeholds, batons, punched in the face all of it, and there were no police.”

In a video Wilson shared with The Collegian, protesters and counterprotesters can be seen fighting in a ditch a few blocks away from the police station. Both Wilson and Loma said the police did not arrive for four to five minutes after the altercations started.

“At the first pro-police rally that we’ve had in Fort Collins, I, a 16-year-old girl, witnessed two beatings, and then the people who got beat were the ones that got arrested when they were the ones who had been assaulted,” Wilson said. “It was getting so violent so quickly, and the Fort Collins Police Service did nothing to help. They came after everyone had already gotten viciously beaten, they didn’t arrest the correct people and they didn’t do anything to try to deescalate the situation. … It was horrendous.”

FCPS Public Relations Manager Kate Kimble wrote in an email to The Collegian that the “physical disturbances” outside the station resulted in three arrests and one citation.

At the first pro-police rally that we’ve had in Fort Collins, I, a 16-year-old girl, witnessed two beatings and then the people who got beat were the ones that got arrested when they were the ones who had been assaulted.” -Ciara Wilson, Fort Collins People’s Initiative for Equity organizer

“We respect everyone’s right to peacefully assemble to voice their concerns,” Kimble wrote. “For the safety of our community, acts of violence, destruction of property and other unlawful behavior will not be tolerated.”

Kimble wrote that some individuals left the scene before police arrived, and FCPS has “an active and ongoing investigation into these incidents.”

After the arrests, the violent altercations stopped and many groups of Back the Blue protesters could be seen having conversations with Black Lives Matter counterprotesters.

Philpot said that every time he attends a rally, he makes it a point to cross the street and have intellectual conversations with people from the other side.

“An education is only going to happen through actually having communication,” Philpot said. “Bringing people together and fighting for equality means that we’re going to be all here tomorrow. We’re all going to be standing somewhere equally, so we need to have those conversations as to what is next.”

Kimble wrote that anyone with information about the people physically fighting is asked to contact the police.

The Collegian has contacted the organizer of the Back the Blue rally and is awaiting a response.

On Aug. 11, Fort Collins Police Chief Jeff Swoboda announced the arrest of two more individuals involved in the fight that took place at a Back the Blue rally outside the police station Aug. 8.

“These two individuals are not from Fort Collins but came here, again, supposedly to support the police department,” Swoboda said in a video statement to the community.

In statements from Aug. 9 and Aug. 11, Swoboda discussed every citizen’s right to express their beliefs and was adamant that anyone supporting the police should not be violating the law.

“Fort Collins, we have made some great strides in the past few months in the discussions we’ve been having,” Swoboda said. “Let’s continue to make sure that we will not be distracted by individuals who are looking to further their own agendas. Let’s all work together to make sure Fort Collins continues to be on the road to being the safest community in the country.”